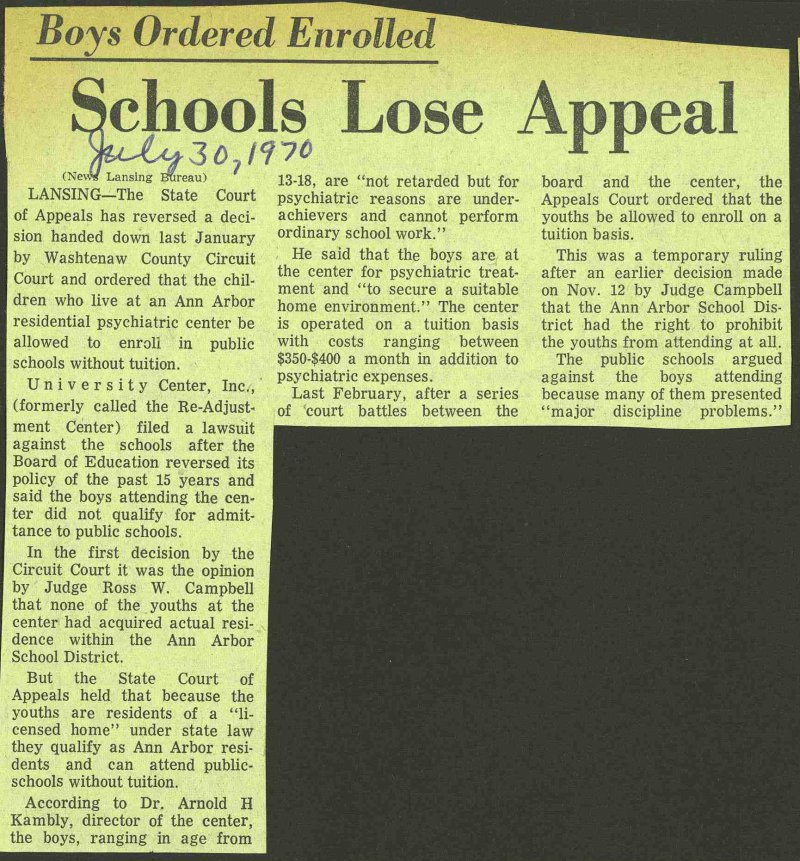 LANSING- The State Court of Appeals has reversed a decisión handed down last January by Washtenaw County Circuit Court and ordered that the children who live at an Ann Arbor residential psychiatrie center be allowed to enroll in public schools without tuition. University Center, Inc,,' (formerly called the Re-Adjustment Center) filed a lawsuit against the schools af ter the Board of Education reversed its policy of the past 15 years and said the boys attending the center did not qualify for admittance to public schools. In the first decisión by the Circuit Court it was the opinión by Judge Ross W. Campbell that none of the youths at the center1 had acquired actual residence within the Ann Arbor School District. But the State Court of Appeals held that because the youths are residents of a "licensed home" under state law they qualify as Ann Arbor residents and can attend publicschools without tuition. According to Dr. Arnold H Kambly, director of the center, the boys, ranging in age from 13-18, are "not retarded but for psychiatrie reasons are underachievers and cannot perform ordinary school work." He said that the boys are, at the center for psychiatrie treatment and "to secure a suitable home environment." The center is operated on a tuition basis with costs ranging between $350-$400 a month in addition to psychiatrie expenses. Last February, after a series of 'court battles between the board and the center, the Appeals Court ordered that the youths be allowed to enroll on a tuition basis. This was a temporary ruling after an earlier decisión made on Nov. 12 by Judge Campbell that the Ann Arbor School District had the right to prohibit the youths from attending at all. The public schools argued against the boys attending because many of them presented "major discipline problems."