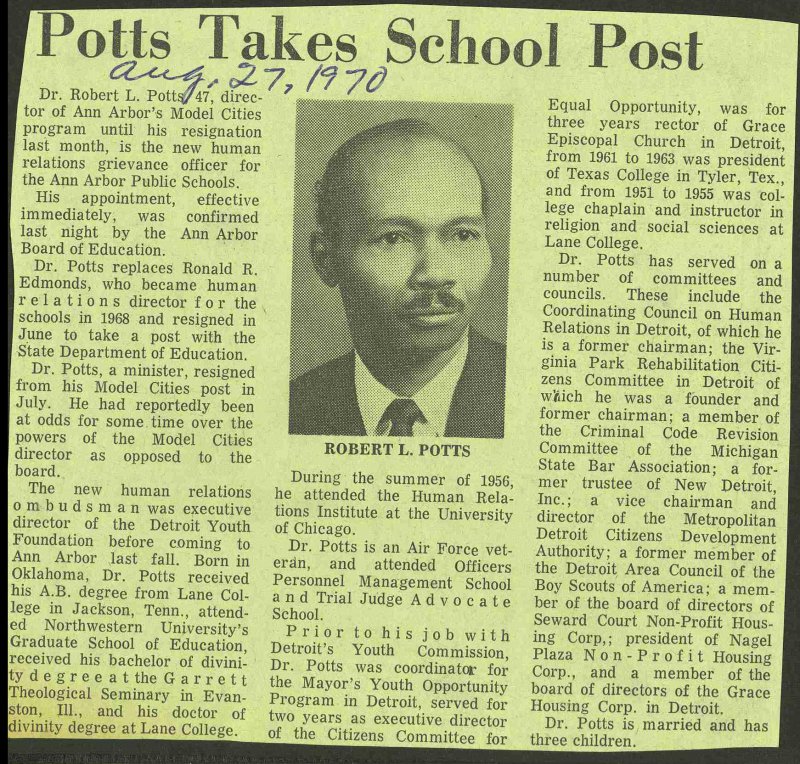 Dr. Robert L. Potts 47, director of Ann Arbor's Model Cities program until his resignation last month, is the new human relations grievance officer for the Ann Arbor Public Schools. His appointment, effective immediately, was confirmed last night by the Ann Arbor Board of Education. Dr. Potts replaces Ronald R. Edmonds, who became human relations director for the schools in 1968 and resigned in June to take a post with the State Department of Education. Dr. Potts, a minister, resigned from his Model Cities post in July. He had reportedly been at odds for some.time over the powers of the Model Cities director as opposed to the bnarrl The new human relations ombudsman was executive director of the Detroit Youth Foundation before coming to Ann Arbor last fall. Born in Oklahoma, Dr. Potts received his A.B. degree from Lane College in Jackson, Tenn., attended Northwestern University's Gradúate School of Education, received his bachelor of divinity degree at the Garrett rheological Seminary in Evanston, 111., and his doctor of iivinity degree at Lane College. During the summër of 1956, he attended the Human Relations Institute at the University of Chicago. Dr. Potts is an Air Force veter dn, and attended Officers Personnel Management School and Trial Judge Advocate School. Prior to his job with Detroit's Youth Commission, Dr. Potts was coördinator for the Mayor's Youth Opportunity Program in Detroit, served for two years as executive director of the Citizens Committee for Equal Opportunity, was for three years rector of Grace Episcopal Church in Detroit, from 1961 to 1963 was president of Texas College in Tyler, Tex., and from 1951 to 1955 was college chaplain and instructor in religión and social sciences at Lane College. Dr. Potts has served on a number of committees and councils. These include the Coordinating Council on Human Relations in Detroit, of which he is a former chairman; the Virginia Park Eehabilitation Citizens Committee in Detroit of wüich he was a founder and former chairman; a member of the Criminal Code Revisión Committee of the Michigan Mate Bar Association; a former trustee of New Detroit, Inc.; a vice chairman and director of the Metropolitan Detroit Citizens Development Authority; a former member of the Detroit Área Council of the Boy Scouts of America; a member of the board of directors of Seward Court Non-Profit Housing Corp,; president of Nagel Plaza Non-Profit Housing Corp., and a member of the i board of directors of the Grace Housing Corp. in Detroit. Dr. Potts is married and has three children.