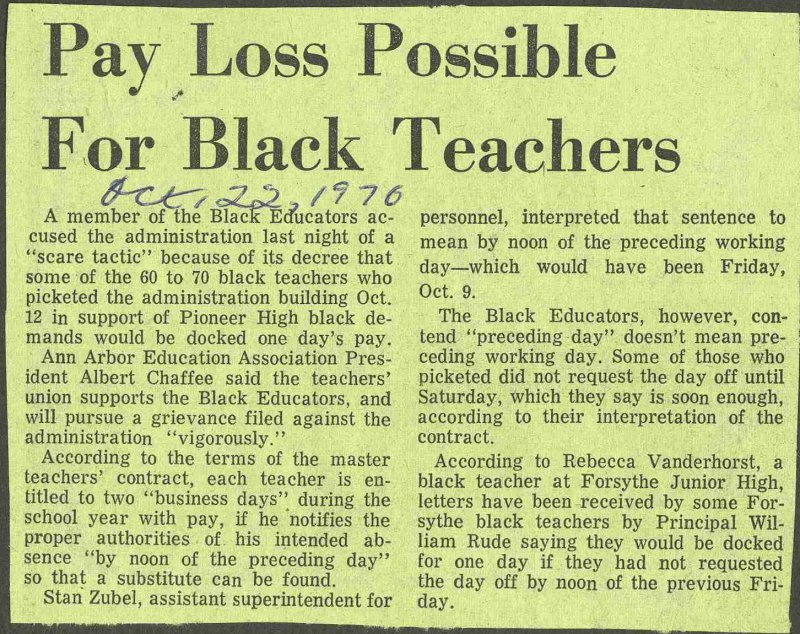 A member of the Black Educators accused the administration last night of a "scare tactic" because of its decree that some of the 60 to 70 black teachers who picketed the administration building Oct. 12 in support of Pioneer High black demands would be docked one day's pay. Ann Arbor Education Association President Albert Chaffee said the teachers' union supports the Black Educators, and will pursue a grievance filed against the administration "vigorously." According to the terms of the master teachers' contract, each teacher is entitled to two "business days" during the school year with pay, if he 'notifies the proper authorities of his intended absence "by noon of the preceding day" so that a substitute can be found. Stan Zubel, assistant superintendent for personnel, interpreted that sentence to mean by noon of the preceding working day - which would have been Friday, Oct. 9. The Black Educators, however, contend "preceding day" doesn't mean preceding working day. Some of those who pieketed did not request the day off until Saturday, which they say is soon enough, according to their interpretation of the contract. According to Rebecca Vanderhorst, a black teacher at Forsythe Junior High, letters have been received by some Forsythe black teachers by Principal William Rude saying they would be docked for one day if they had not requested the day off by noon of the previous Friday.