Third Student At Pioneer Is Disciplined 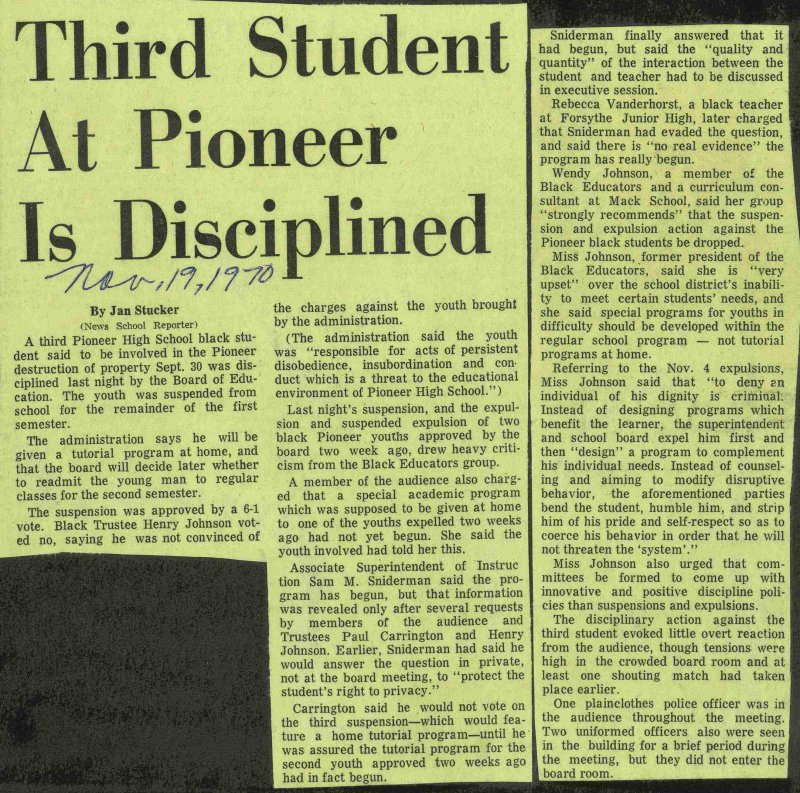 A third Pioneer High School black student said to be involved in the Pioneer destruction of property Sept. 30 was disciplined last night by the Board of Education. The youth was suspended from school for the remainder of the first semester. The administration says he will be given a tutorial program at home, and that the board will decide later whether to readmit the young man to regular classes for the second semester. The suspension was approved by a 6-1 vote. Black Trustee Henry Johnson voted no, saying he was not convinced of the charges against the youth brought by the administration. (The administration said the youth was "responsible for acts of persistent disobedience, insubordination and conduet which is a threat to the educational environment of Pioneer High School.") Last night's suspension, and the expulsión and suspended expulsión of two black Pioneer youths approved by the board two week ago, drew heavy criticism from the Black Educators group. A member of the audience also charged that a special academie program which was supposed to be given at home to one of the youths expelled two weeks ago had not yet begun. She said the youth involved had told her this. Associate Superintendent of Instruc tion Sara M. Sniderman said the program has begun, but that information was revealed only after several requests by members of the audience and Trustees Paul Carrington and Henry Johnson. Earlier, Sniderman had said he would answer the question in private, not at the board meeting, to "protect the 1 student' s right to privacy." Carrington said he would not vote on the third suspension- which would feature a home tutorial program- until he I was assured the tutorial program for the I second youth approved two weeks ago I had in fact begun. Sniderman finally answered that it I had begun, but said the "quality and I quantity" of the interaction between the I student and teacher had to be discussed I in executive session. Rebecca Vanderhorst, a black teacher I at Forsythe Junior High, later charged that Sniderman had evaded the question, and said there is "no real evidence" the program has really 'begun. Wendy Johnson, a member of the Black Educators and a curriculum consultant at Mack School, said her group "strongly recommends" that the suspension and expulsión action against the Pioneer black students be dropped. Miss Johnson, former president of the Black Educators, said she is "very upset" over the school district's inability to meet certain students' needs, and she said special programs for youths in difficulty should be developed within the regular school program - not tutorial programs at home. Referring to the Nov. 4 expulsions, Miss Johnson said that "to deny an individual of his dignity is criminal. Instead of designing programs which benefit the learner, the superintendent and school board expel him first and then "design" a program to complement his individual needs. Instead of counseling and aiming to modify disruptive I behavior, the aforementioned parties J bend the student, humble him, and strip ] him of his pride and self-respect so as to I coerce his behavior in order that he will ! not threaten the 'system'." Miss Johnson also urged that committees be formed to come up with innovative and positive discipline policies than suspensions and expulsions. The disciplinary action against the third student evoked little overt reaction from the audience, though tensions were high in the crowded board room and at least one shouting match had taken place earlier. One plainclothes pólice officer was in I the audience throughout the meeting. I Two uniformed officers also were seen I in the building for a brief period during I the meeting, but they did not enter the I board room. I