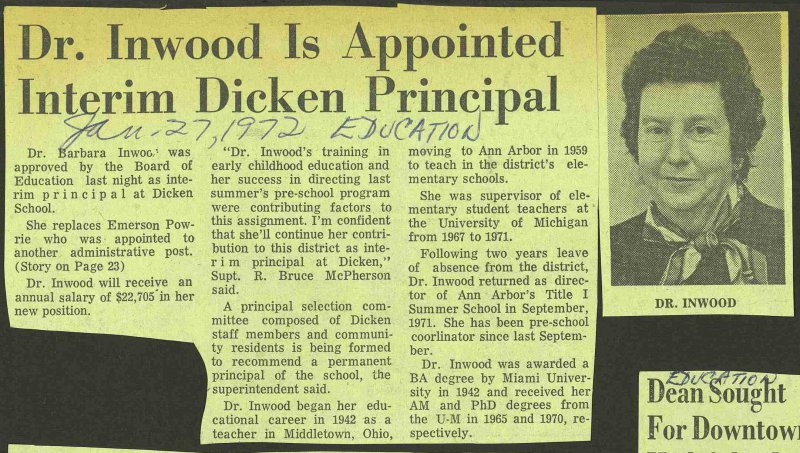 Dr. Barbara Inwood was approved by the Board of Education last night as interim principal at Dicken School. She replaces Emerson Powrie who was appointed to another administrative post. (Story on Page 23) Dr. Inwood will receiye an annual salary of $22,705'in her new position. "Dr. Inwood's training in early childhood education and her success in directing last summer's pre-school program were contributing factors to this assignment. I'm confident that she'll continue her contribution to this district as interim principal at Dicken," Supt. R. Bruce McPherson said. A principal selection committee composed of Dicken staff members and community residents is being formed i to recommend a permanent I principal of the school, the superintendent said. I Dr. Inwood began her educational career in 1942 as a teacher in Middletown, Ohio, ! moving to Ann Arbor in 1959 to teach in the district's elementary schools. She was supervisor of elementary student teachers at the University of Michigan from 1967 to 1971. Following two years leave of absence from the district, Dr. Inwood returned as director of Ann Arbor's Title I Summer School in September, 1971. She has been pre-school coorlinator since last September. Dr. Inwood was awarded a BA degree by Miami Univer-i sity in 1942 and received her AM and PhD degrees from the U-M in 1965 and 1970, respectively. I