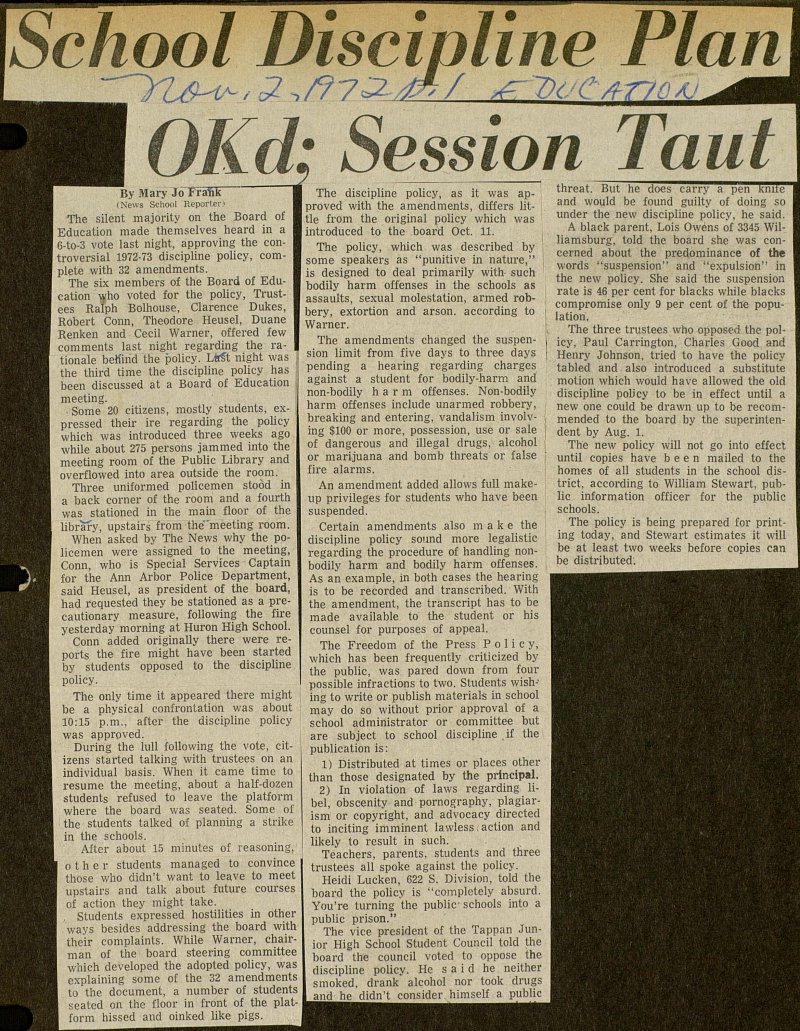 The silent majority on the Board of Education made themselves heard in a 6-to-3 vote last night, approving the controversial 1972-73 discipline policy, complete with 32 amendments. The six members of the Board of Education who voted for the policy, Trustees Ralph Bolhouse, Clarence Dukes, Robert Conn, Theodore Heusel, Duane Renken and Cecil Warner, offered few comments last night regarding the rationale betíirid the policy. Lfcft night was jj the third time the discipline policy has been discussed at a Board of Education meeting. Some 20 citizens, mostly students, expressed their ire regarding the policy which was introduced three weeks ago while about 275 persons jammed into the meeting room of the Public Library and overflowed into area outside the room. Three uniformed policemen stoód in a back corner of the room and a fourth was stationed in the main floor of the library, upstairs from the'meeting room. When asked by The News why the policemen were assigned to the meeting, Conn, who is Special Services Captain for the Ann Arbor Pólice Department, said Heusel, as president of the board, had requested they be stationed as a precautionary measure, following the fire yesterday morning at Huron High School. Conn added originally there were reports the fire might have been started by students opposed to the discipline policy. The only time it appeared there might be a physical confrontation was about 10:15 p.m., after the discipline policy was approved. During the lull following the vote, citizens started talking with trustees on an individual basis. When it carne time to resume the meeting, about a half-dozen students refused to leave the platform where the board was seated. Some of the students talked of planning a strike in the schools. After about 15 minutes of reasoning, I o t h e r students managed to convince those who didn't want to leave to meet upstairs and talk about future courses of action they might take. Students expressed hostilities in other ways besides addressing the board with their complaints. While Warner, chairman of the board steering committee which developed the adopted policy, was explaining some of the 32 amendments to the document, a number of students seated on the floor in front of the platI form hissed and oinked like pigs. The discipline policy, as it was approved with the amendments, differs little from the original policy which was introduced to the board Oct. 11. The policy, which was described by some speakers as "punitive in nature," is designed to deal primarily such bodily harm offenses in the schools as assaults, sexual molestation, armed robbery, extortion and arson. according to Warner. The amendments changed the suspension limit from five days to three days pending a hearing regarding charges against a student for bodily-harm and non-bodily harm offenses. Non-bodily harm offenses include unarmed robbery, breaking and entering, vandalism involving $100 or more, possession, use or sale i of dangerous and illegal drugs, alcohol or marijuana and bomb threats or false fire alarms. An amendment added allows full makeup privileges for students who have been suspended. Certain amendments also m a k e the discipline policy sound more legalistic regarding the procedure of handling nonbodily harm and bodily harm offenses. As an example, in both cases the hearing is to be recorded and transcribed. With the amendment, the transcript has to be made available to the student or his counsel for purposes of appeal. The Freedom of the Press Policy, which has been frequently criticized by the public, was pared down from four possible infractions to two. Students wish-1 ing to write or publish materials in school may do so without prior approval of a school administrator or committee but are subject to school discipline if the publication is: 1) Distributed at times or places other than those designated by the principal. 2) In violation of laws regarding libel, obscenity and pornography, plagiarism or copyright, and advocacy directed to inciting imminent lavvless , action and likely to result in such. Teachers, parents, students and three trustees all spoke against the policy. Heidi Lucken, 622 S. División, told the board the policy is "completely absurd. You're turning the public schools into a public prison." The vice president of the Tappan Junior High School Student Council told the board the council voted to oppose the discipline policy. He s a i d he neither smoked, drank alcohol nor took drugs and he didn't consider himself a public threat. But he does carrypërnöïïï1 and vvould be found guilty of doing so under the new discipline policy, he said. A black parent, Lois Owéns of 3345 Williamsburg, told the board she was concerned about the predominance of the words "suspension" and "expulsión" in the new policy. She said the suspension rate is 46 per cent for blacks while blacks compromise only 9 per cent of the population. The three trustees who opposed the policy, Paul Carrington, Charles Good and Henry Johnson, tried to have the policy tabled and also introduced a substitute motion which would have allowed the old discipline policy to be in effect until a new one could be drawn up to be recommended to the board by the superintendent by Aug. 1. The new policy will not go into effect until copies have been mailed to the homes of all students in the school district, according to William Stewart, public information officer for the public schools. The policy is being prepared for printing today, and Stewart estimates it will be at least two weeks before copies can be distributed.