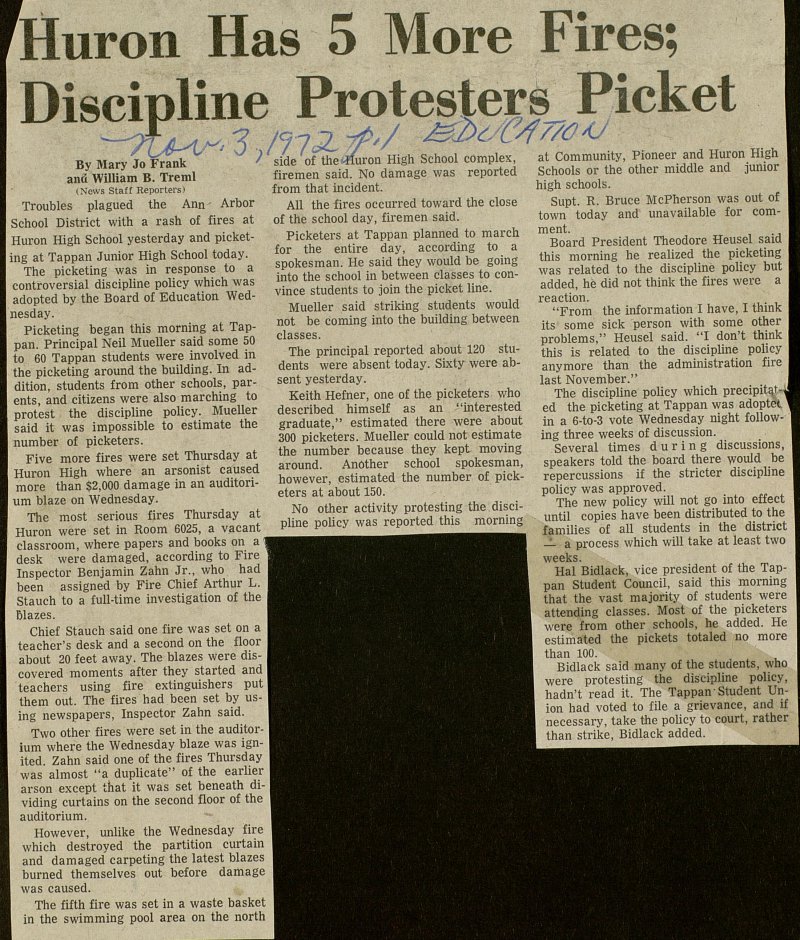 Troubles plagued the Arbor School District with a rash of fires at Huron High School yesterday and picketing at Tappan Junior High School today. The picketing was in response to a controversial discipline policy which was adopted by the Board of Education Wednesday. Picketing began this morning at Tappan. Principal Neil Mueller said some 50 to 60 Tappan students were involved in the picketing around the building. In addition, students from other schools, parents, and citizens were also marching to protest the discipline policy. Mueller said it was impossible to estímate the number of picketers. Five more fires were set Thursday at Huron High where an arsonist caused more than $2,000 damage in an auditorium blaze on Wednesday. The most serious fires Thursday at Huron were set in Room 6025, a vacant classroom, where papers and books on a 1 desk were damaged, according to Fire Inspector Benjamin Zahn Jr., who had been assigned by Fire Chief Arthur L. Stauch to a full-time investigation of the blazes. Chief Stauch said one fire was set on a teacher's desk and a second on the floor about 20 feet away. The blazes were discovered moments after they started and teachers using fire extinguishers put them out. The fires had been set by using newspapers, Inspector Zahn said. Two other fires were set in the auditorium where the Wednesday blaze was ignited Zahn said one of the fires Thursday I was almost "a duplícate" of the earlier arson except that it was set beneath dividing curtains on the second floor of the auditorium. However, unlike the Wednesday fire which destroyed the partition curtain and damaged carpeting the latest blazes burned themselves out before damage I was caused. The fifth fire was set in a waste basket in the swimming pool area on the north side of the'-Huron High School complex, firemen said. No damage was reported from that incident. All the fires occurred toward the close of the school day, firemen said. Picketers at Tappan planned to march for the entire day, according to a spokesman. He said they would be going into the school in between classes to convince students to join the picket line. Mueller said strildng students would not be coming into the building between classes. The principal reported about 120 students were absent today. Sixty were absent yesterday. Keith Hefner, one of the picketers who described himself as an "interested gradúate," estimated there were about 300 picketers. Mueller could not estímate the number because they kept moving around. Anöther school spokesman, however, estimated the number of picketers at about 150. No other activity protesting the discipline policy was reported this morning SIS 'S ■ at Community, Pioneer and Hurón High I Schools or the other middle and junior I high schools. i Supt. R. Bruce McPherson was out of I town today and unavailable for I ment. I Board President Theodore Heusel said I this morning he realized the picketing I was related to the discipline policy but I added, he did not think the fires were a I reaction. I "From the information I have, I think I its some sick person with some other I problems," Heusel said. "I don't think I this is related to the discipline policy I anymore than the administration fire I last November." I The discipline policy which precipita-J ed the picketing at Tappan was adoptet I in a 6-to-3 vote Wednesday night following three weeks of discussion. Several times d u r i n g discussions, ! speakers told the board there would be repercussions if the stricter discipline policy was approved. The new policy will not go into effect until copies have been distributed to the families of all students in the district - a process which will take at least two weeks. Hal Bidlack, vice president of the Tappan Student Council, said this morning that the vast majority of students were attending classes. Most of the picketers were from other schools, he added. He estimated the pickets totaled no more than 100. Bidlack said many of the students, who were protesting the discipline policy, hadn't read it. The Tappan Student Union had voted to file a grie vanee, and if necessary, take the policy to court, rather than strike, Bidlack added.