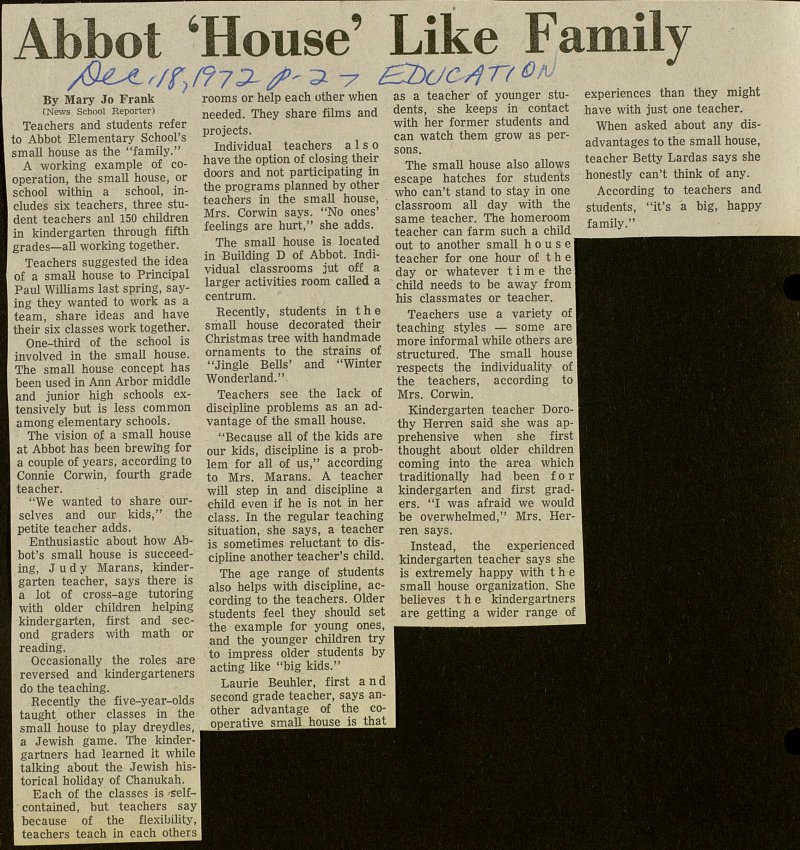 Teachers and students refer to Abbot Elementary School's small house as the "family." A working example of cooperation, the small house, or school within a school, includes six teachers, three student teachers anl 150 children in kindergarten through fifth grades- all working together. Teachers suggested the idea of a small house to Principal Paul Williams last spring, saying they wanted to work as a team, share ideas and have their six classes work together. One-third of the school is I involved in the small house. The small house concept has been used in Ann Arbor middle I and junior high schools extensively but is less common among elementary schools. The visión of a small house at Abbot has been brewihg for I a couple of years, according to I Connie Corwin, fourth grade I teacher. "We wanted to share ourselves and our kids," the petite teacher adds. Enthusiastic about how Abbot's small house is succeeding, J u d y Marans, kindergarten teacher, says there is a lot of cross-age tutoring with older children helping kindergarten, first and second graders with math or reading. Occasionally the roles are reversed and kindergarteners do the teaching. Recently the five-year-olds taught other classes in the small house to play dreydles, a Jewish game. The 1 gartners had learned it while I talking about the Jewish 1 torical holiday of Chanukah. Each of the classes is I contained, but teachers sayl because of the flexibility, I teachers teach in each others rooms or help each other when needed. They share films and projects. Individual teachers a 1 s o have the option of closing their doors and not participating in the programs planned by other teachers in the small house, Mrs. Corwin says. "No ones' feelings are hurt," she adds. The small house is located in Building D of Abbot. Individual classrooms jut off a larger activities room called a centrum. Recently, students in t h e small house decorated their Christmas tree with handmade ornaments to the strains of "Jingle Bells' and "Winter Wonderland.". Teachers see the lack of discipline problems as an advantage of the small house. "Because all of the kids are our kids, discipline is a problem for all of us," according to Mrs. Marans. A teacher will step in and discipline a child even if he is not in her class. In the regular teaching situation, she says, a teacher is sometimes reluctant to discipline another teacher's child. The age range of students also helps with discipline, according to the teachers. Older students feel they should set the example for young ones, and the younger children try to impress older students by acting like "big kids." Laurie Beuhler, first and second grade teacher, says another advantage of the cooperative small house is that as a teacher of younger students, she keeps in contact with her former students and can watch them grow as persons. The small house also allows escape hatches for students who can't stand to stay in one classroom all day with the same teacher. The homeroom teacher can farm such a child out to another small housel teacher for one hour of t h e I day or whatever time the I child needs to be away fromj his classmates or teacher. Teachers use a variety of I teaching styles - some are I more informal while others are structured. The small house respects the individuality of the teachers, according to Mrs. Corwin. Kindergarten teacher ' thy Herren said she was apprehensive when she first thought about older children coming into the area which traditionally had been for kindergarten and first graders. "I was af raid we would be overwhelmed," Mrs. Herren says. Instead, the experienced kindergarten teacher says she is extremely happy with the small house organization. She believes the kindergartners are getting a wider range of experiences than they might have with just one teacher. When asked about any disadvantages to the small house, teacher Betty Lardas says she honestly can't think of any. According to teachers and students, "it's a big, happy family."