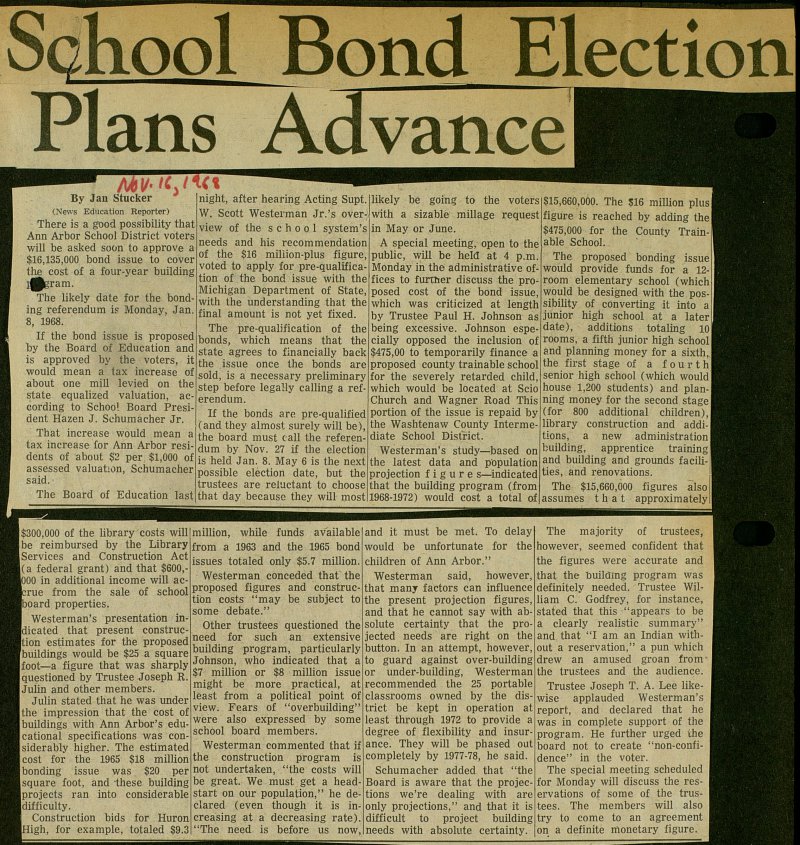 There is a good possibility that Ann Arbor School District voters will be asked soon to approve a $16,135,000 bond issue to cover the cost of a four-year building l(pgram. The likely date for the bonding referendum is Monday, Jan. 8, 1968. If the bond issue is proposed by the Board of Education and is approved by the voters, it would mean a tax increase of about one mili levied on the state equalized valuation, according to School Board President Hazen J. Schumacher Jr. That increase would mean a tax increase for Ann Arbor residents of about $L' per $1,000 of assessed valuation, Schumacher said. The Board of Education last night, after hearing Acting Supt. W. Scott Westerman Jr.'s overview of the school system's needs and his recommendation of the $16 million-plus figure, voted to apply for pre-qualification of the bond issue with the Michigan Department of State, with the understanding that the final amount is not yet fixed. The pre-qualification of the bonds, which means that the state agrees to financially back the issue once the bonds are sold, is a necessary preliminary step before legally calling a referendum. If the bonds are pre-qualified (and they almost surely will be), the board must cali the referendum by Nov. 27 if the election is held Jan. 8. May 6 is the next possible election date, but the trustees are reluctant to choose that day because they will most likely be going to the voters with a sizable millage request in May or June. A special meeting, open to the public, will be held at 4 p.m. Monday in the administrative offices to furrtier discuss the proposed cost of the bond issue, which was criticized at length by Trustee Paul H. Johnson as being excessive. Johnson especially opposed the inclusión of $475,00 to temporarily finance a proposed county trainable school for the severely retarded child, which would be located at Scio Church and Wagner Road This portion of the issue is repaid by the Washtenaw County Intermedíate School District. Westerman's study - based on the latest data and pöpulation projection figure s - indicated that the building program (from 1968-1972) would cost a total of $15,660,000. The 516 million plus figure is reached by adding the $475,000 for the County Trainable School. The proposed bonding issue would provide funds for a 12room elementary school (which would be designed with the possibility of converting it into a junior high school at a later date), additions totaling 10 rooms, a fifth junior high school and planning money for a sixth, the first stage of a fourth senior high school (which would house 1,200 students) and planning money for the second stage (for 800 additional children), library construction and additions, a new administration building, apprentice training and building and grounds facilities, and renovations. The $15,660,000 figures also assumes t h a t approximately - - $300,000 of the library costs will Ibe reimbursed by the Library Services and Construction Act (a federal grant) and that $600,KIOO in additional income will acIcrue from the sale of school [board properties. I Westerman's presentation inIdicated that present construcItion estimates for the proposed buildings would be $25 a square foot- a figure that was sharply questioned by Trustee Joseph R. Julin and other members. Julin stated that he was under the impression that the cost of buildings with Ann Arbor's educational specifications was considerably higher. The estimated cost for the 1965 $18 million bonding issue was $20 per square foot, and these building Iprojects ran into considerable [difficulty. Construction bids for Huron iHigh, for example, totaled $9.3 million, white funds av'ailable from a 1963 and the 1965 bond issues totaled only $5.7 million. Westerman conceded that the proposed figures and construction costs "may be subject to some debate." Other trustees questioned the need for such an extensive building program, particularly Johnson, who indicated that a $7 million or $8 million issue might be more practical, at least from a political point of view. Fears of "overbuilding" were also expressed by some school board members. Westerman commented that if the construction program is not undertaken, "the costs will be great. We must get a headstart on our population," he declared (even though it is increasing at a decreasing rate). "The need is before us now, and it must be met. To delay would be unfortunate for the children of Ann Arbor." Westerman said, however, that many factors can influence the present projection figures, and that he cannot say with absolute certainty that the projected needs are right on the button. In an attempt, however, to guard against over-building or under-building, Westerman recommended the 25 portable classrooms owned by the district be kept in operation at least through 1972 to provide a degree of flexibility and insurance. They will be phased out completely by 1977-78, he said. Schumacher added that "the Board is aware that the projections we're dealing with are only projections," and that it is difficult to project building needs with absolute certainty. The majority of trustees, however, seemed confident that the figures were accurate and that the tmilöing program was definitely needed. Trustee William C. Godfrey, for instance, stated that this "appears to be a clearly realistic summary" and that "I am an Indian without a reservation," a pun which drew an amused groan from the trustees and the audience. Trustee Joseph T. A. Lee likewise applauded Westerman's report, and declared that he was in complete support of the program. He further urged the board not to créate "non-confidence" in the voter. The special meeting scheduled for Monday will discuss the reservations of some of the trustees. The members will also try to come to an agreement on a definite monetary figure.