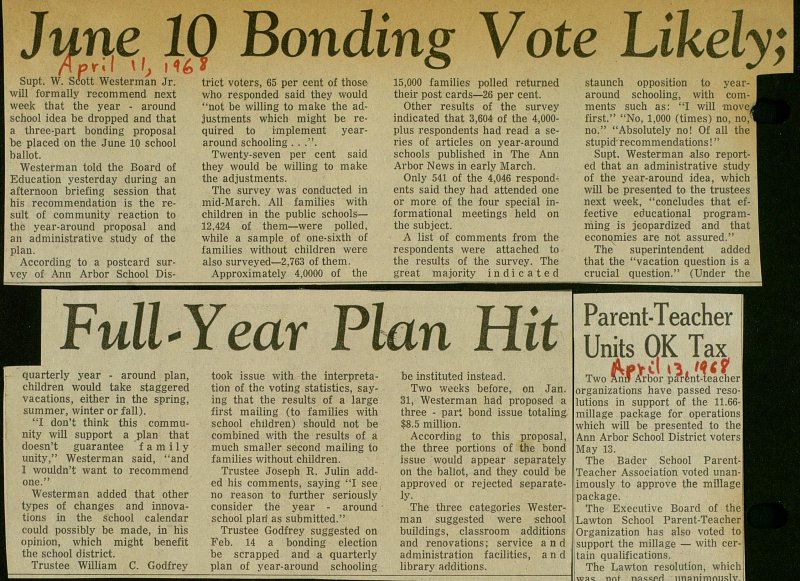 Supt. W. Scott Westerman Jr. will formally rscommend next week that the year - around school idea be dropped and that a three-part bonding proposal be placed on the June 10 school ballot. Westerman told the Board of Education yesterday during an afternoon briefing session that his recommendation is the result of community reaction to the year-around proposal and an administrative study of the plan. According to a postcard survey of Ann Arbor School trict voters, 65 per cent of those who responded said they would "not be willing to make the adjustments which might be required to implement yeararound schooling . . .". Twenty-seven per cent said they would be willing to make the adjustments. The survey was conducted in mid-March. All families with children in the public schools - 12,424 of them- were polled, while a sample of one-sixth of families without children were also survey ed- 2,763 of them. Approximately 4,0000 of the 15,000 families polled returned their post cards- 26 per cent. Other results of the survey indicated that 3,604 of the 4,000plus respondents had read a series of articles on year-around schools published in The Ann Arbor News in early March. Only 541 of the 4,046 respondents said they had attended one or more of the four special informational meetings held on the subject. A list of comments from the respondents were attached to the results of the survey. The great majority indicated staunch opposition to yeararound schooling, with comments such as: "I will movej first." "No, 1,000 (times) no, no,t no." "Absolutely no! Of all the stupid recommendations ! " Supt. Westerman also reported that an administrative study of the year-around idea, which will be presented to the trustees next week, "concludes that effective educational programming is jeopardized and that economies are not assured." The superintendent added that the "vacation question is a crucial question." (Under the quarterly year - around plan, children would take staggered vacations, either in the spring, summer, winter or fall). "I don't think this community will support a plan that doesn't guarantee f a m i I y unity," Westerman said, "and I wouldn't want to recommend one." Westerman added that other types of changes and innovations in the school calendar could possibly be made, in his opinión, which might benefit the school district. Trustee William C. Godfrey took issue with the interpretation of the voting statistics, saying that the results of a large first mailing (to families with school children) should not be combined with the results of a much smaller second mailing to families without children. Trustee Joseph R. Julin added his comments, sayjng "I see no reason to further seriously consider the year - around ' school plari as submitted." Trustee Godfrey suggested on Feb. 14 a bonding election be scrapped and a quarterly plan of year-around schooling be instituted instead. Two weeks before, on Jan. 31, Westerman had proposed a three - part bond issue totaling $8.5 million. AccordiDg to this proposal, the three portions of the bond issue would appear separately on the ballot, and they could be approved or rejected separately. The three categories Westerman suggested were school buildings, classroom additions and renovations; service and administration facilities, and library additions.