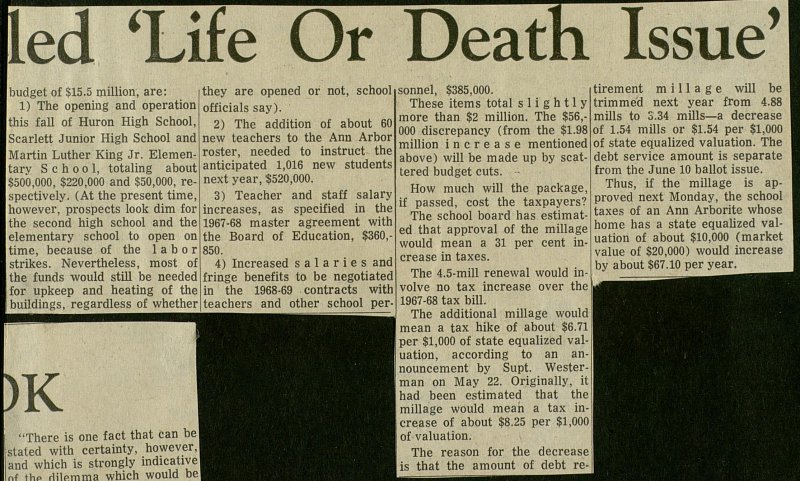 (FIRST OF TWO ARTICLES) ' The expected opening and operation of three new schools, (the hiring of approximately 60 additional teachers, and salary increases for teachers and other school personnel. These three items - totaling slightly more than $2 million- account for the expected increases in the 1968-69 school operating budget which prompted the Board of Education to schedule an operational millage election Monday. Originally slated for May 13, the millage election was postponed and combined with the annual school board elections because of legal complications. Ann Arbor School District voters are being asked to approve a f i v e - year package of 11.66 milis for operation- a proposition which has been termed a "life or death issue" by the Board of Education. School officials have emphasized that this millage request will maintain educational programs at present levéis only, and does not include more than $1 million worth of improvements recommended by the professional staff. The package includes a 4.5mili renewal and 7.16 additional milis. An additional amount of lv09, which was authorized last year but not levied, would also be levied, making a total of 8.25 new milis to be levied on the taxpayers if the milla ge is approved. This would mean an amount of 29.25 milis for operations would be levied on school trict residents for the 1968-6 school year, assuming the mil age passes. The 1967-68 levy fo operations was 21 milis. If the millage package is ai proved, funds would be avail; ble for the $17.48 million budj et which Supt. W. Scott Westei man Jr. has estimated will b needed for the 1968-69 schol year - a budget termed "consei vative" and "hold-the-line" b Westerman. Major elements in the $17.4 million budget, an increase c $1.98 million from the 1967-6 budget of $15.5 million, are: 1) The opening and operation this fall of Huron High School, Scarlett Junior High School and Martin Luther King Jr. Elementary School, totaling about $500,000, $220,000 and $50,000, respectively. (At the present time, however, prospects look dim for the second high school and the elementary school to open on time, because of the labor strikes. Nevertheless, most of the funds would still be needed for upkeep and heating of the buildings, regardless of whether they are opened or not, school officials say). 2) The addition of about 60 new teachers to the Ann Arbor roster, needed to instruct the anticipated 1,016 new students next year, $520,000. 3) Teacher and staff salary increases, as specified in the 1967-68 master agreement with the Board of Education, $360,850. 4) Increased salaries and fringe benefits to be negotiated in the 1968-69 contracts with teachers and other school sonnel, $385,000. 1 These items total s 1 i g h 1 1 y I more than $2 million. The : 000 discrepancy (from the $1.98 ( million inciease mentioned i above) will be made up by i tered budget cuts. - How much will the package, if passed, cost the taxpayers? The school board has ' ed that approval of the millage would mean a 31 per cent increase in taxes. The 4.5-mill renewal would involve no tax increase over theL 1967-68 tax bilí. The additional millage would mean a tax hike of about $6.71 per $1,000 of state equalized valuation, according to an announcement by Supt. Westerman on May 22. Originally, it had been estimated that the millage would mean a tax increase of about $8.25 per $1,000 of valuation. The reason for the decrease is that the amount of debt tirement mili a ge will be I trimme'd next year from 4.88 I milis to 3.34 milis- a decrease of 1.54 milis or $1.54 per $1,000 of state equalized valuation. The debt service amount is separate from the June 10 ballot issue. Thus, if the millage is approved next Monday, the school taxes of an Ann Arborite whose home has a state equalized valuation of about $10,000 (market valué of $20,000) would increase by about $67.10 per year.