Candidate Is Pessimistic About Schools' Condition 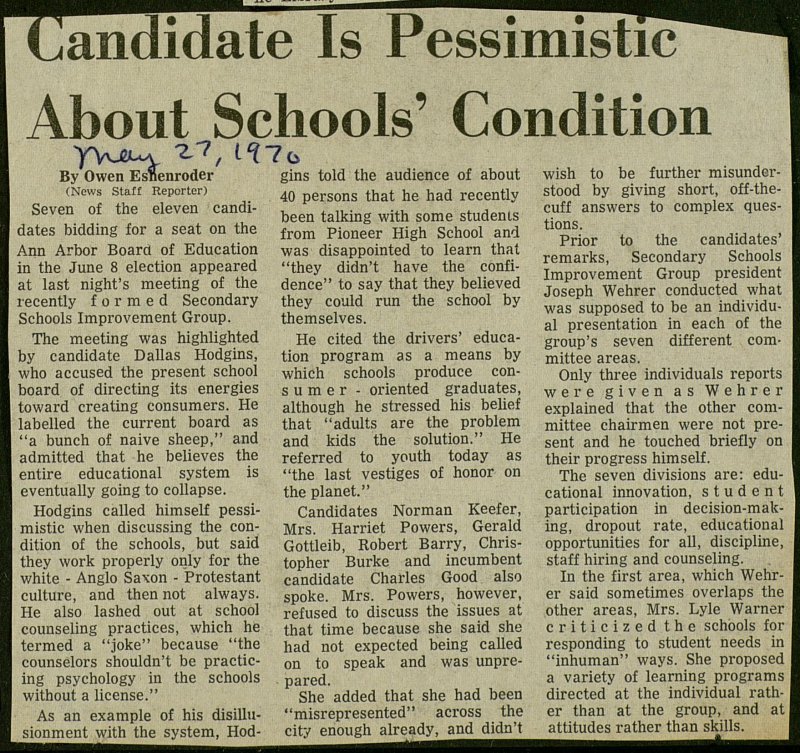 Seven of the eleven candidates bidding for a seat on the Ann Arbor Board of Education in the June 8 election appeared at last night's meeting of the recently formed Secondary Schools Improvement Group. The meeting was highlighted by candidate Dallas Hodgins, who accused the present school board of directing its energies toward creating consumers. He labelled the current board as "a bunch of naive sheep," and admitted that he believes the entire educational system is eventually going to collapse. Hodgins called himself pessimistic when discussing the condition of the schools, but said they work properly only for the white - Anglo Saxon - Protestant culture, and then not always. He also lashed out at school counseling practices, which he termed a "joke" because "the counselors shouldn't be practicing psychology in the schools without a license." As an example of his disillusionment with the system, gins told the audience of about 40 persons that he had recently been talking with some studenls from Pioneer High School and was disappointed to learn that "they didn't have the confidence" to say that they believed they could run the school by themselves. He cited the drivers' education program as a means by which schools produce cons u m e r - oriented graduates, although he stressed his belief that "adults are the problem and kids the solution." He referred to youth today as "the last vestiges of honor on the planet." Candidates Norman Keefer, Mrs. Harriet Powers, Gerald Gottleib, Robert Barry, Christopher Burke and incumbent candidate Charles Good also spoke. Mrs. Powers, however, refused to discuss the issues at that time because she said she had not expected being called on to speak and was unprepared. She added that she had been "misrepresented" across the city enough already, and didn't wish to be further misunderstood by giving short, off-thecuff answers to complex questions. Prior to the candidates' remarks, Secondary Schools Improvement Group president Joseph Wehrer conducted what was supposed to be an individual presentation in each of the group's seven different committee areas. Only three individuals reports were given as Wehrer explained that the other committee chairmen were not present and he touched briefly on their progress himself . The seven divisions are: educational innovation, student participation in decision-making, dropout rate, educational opportunities for all, discipline, staff hiring and counseling. In the first area, which Wehrer said sometimes overlaps the other areas, Mrs. Lyle Warner criticized the schools for responding to student needs in "inhuman" ways. She proposed a variety of learning programs directed at the individual 1 er than at the group, and at attitudes rather than skills.