Prevention Of Failure An Aim Of School Tax 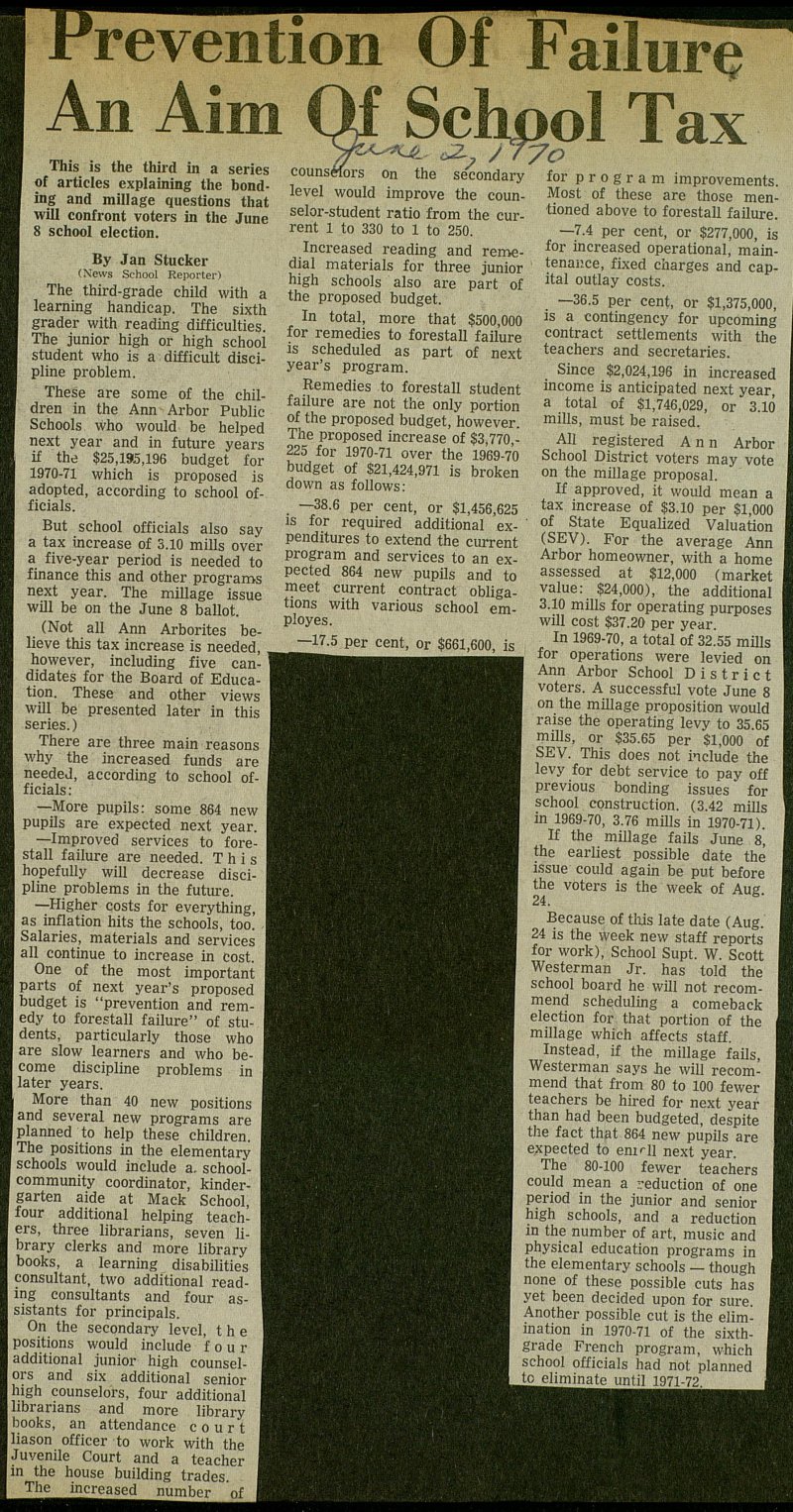 This is the third in a series of articles explaining the bonding and millage questions that will confront voters in the June 8 school eleetion. The third-grade child with a learning handicap. The sixth grader with reading diffieulties. The junior high or high school student who is a difficult discipline problem. These are some of the children in the Ann Arbor Public Schools who would be helped next year and in future years if the $25,195,196 budget for 1970-71 which is proposed is adopted, according to school officials. But school officials also say a tax increase of 3.10 milis over a five-year period is needed to finance this and other programs next year. The millage issue will be on the June 8 ballot. (Not all Ann Arborites believe this tax increase is needed, however, including five 1 didates for the Board of Education. These and other views will be presented later in this series.) There are three main reasons why the increased funds are I needeJ, according to school I f icials : -More pupils: some 864 new I pupils are expected next year. - Improved services to foreI stall failure are needed. T h i s I hopefully will decrease disciI pline problems in the future. - Higher costs for everything, I as inflation hits the schools, too. I Salaries, materials and services I all continue to increase in cost. One of the most important I parts of next year's proposed I budget is "prevention and remI edy to forestall failure" of stuI dents, particularly those who I are slow learners and who become discipline problems in later years. I More than 40 new positions land several new programs are Iplanned to help these children. The positions in the elementary I schools would include a. I community coördinator, I garten aide at Mack School, I four additional helping I ers, three librarians, seven library clerks and more library books, a learning disabilities I consultant, two additional reading consultants and four assistants for principáis. On the secondary level, the positions would include four additional junior high counselors and six additional senior high counselors, four additional librarians and more library I books, an attendance c o u r t liason officer to work with the I Juvenile Court and a teacher I in the house building trades The increased number of y ■ - p ' counselors on the secondary level would improve the counselor-student ratio from the current 1 to 330 to 1 to 250. Increased reading and remedial materials for three junior high schools also are part of the proposed budget. In total, more that $500,000 for remedies to forestall failure is scheduled as part of next year's program. Remedies to forestall student failure are not the only portion of the proposed budget, however. The proposed increase of $3,770 - 225 for 1970-71 over the 1969-70 budget of $21,424,971 is broken down as follows: -38.6 per cent, or $1,456,625 is for required additional ' penditures to extend the current program and services to an expected 864 new pupils and to meet current contract obligations with various school employés. - 17-5 Per cent, or $661,600, is for program improvements. Most of these are those mentioned above to forestall failure. -7.4 per cent, or $277,000, is for increased operational, maintenance, fixed charges and capital outlay costs. -36.5 per cent, or $1,375,000, is a contingency for upcoming contract settlements with the teachers and secretaries. Since $2,024,196 in increased income is anticipated next year a total of $1,746,029, or 3.10 milis, must be raised. All registered Ann Arbor School District voters may vote on the millage proposal. If approved, it would mean a tax increase of $3.10 per $1,000 of State Equalized Valuation (SEV). For the average Ann Arbor homeowner, with a home assessed at $12,000 (market I value: $24,000), the additional 3.10 milis for operating purposes will cost $37.20 per year In 1969-70, a total of 32.'55 milis for operations were levied on Ann Arbor School District voters. A successful vote June 8 on the millage proposition would raise the operating levy to 35 65 milis, or $35.65 per $1,000 of SEV. This does not include the levy for debt service to pay off previous bonding issues for school cpnstruction. (3.42 milis in 1969-70, 3.76 milis in 1970-71). If the millage fails June 8, the earliest possible date the I issue could again be put before the voters is the week of Aug. 24. I Because of this late date (Aug. 24 is the week new staff reports for work), School Supt. W. Scott Westerman Jr. has told the school board he will not recommend scheduling a comeback election for that portion of the millage which affects staff. Instead, if the millage fails, Westerman says he will recommend that from 80 to 100 fewer teachers be hired for next year than had been budgeted, despite the fact that 864 new pupils are expected to enidi next year 1 The 80-100 fewer teachers could mean a reduction of one period in the junior and senior high schools, and a reduction in the number of art, music and physical education programs in I the elementary schools - though I none of these possible cuts has I yet been decided upon for sure. I Another possible cut is the I ination in 1970-71 of the sixthgrade French program, which school officials had not planned to_eliminate until 1971-72. m