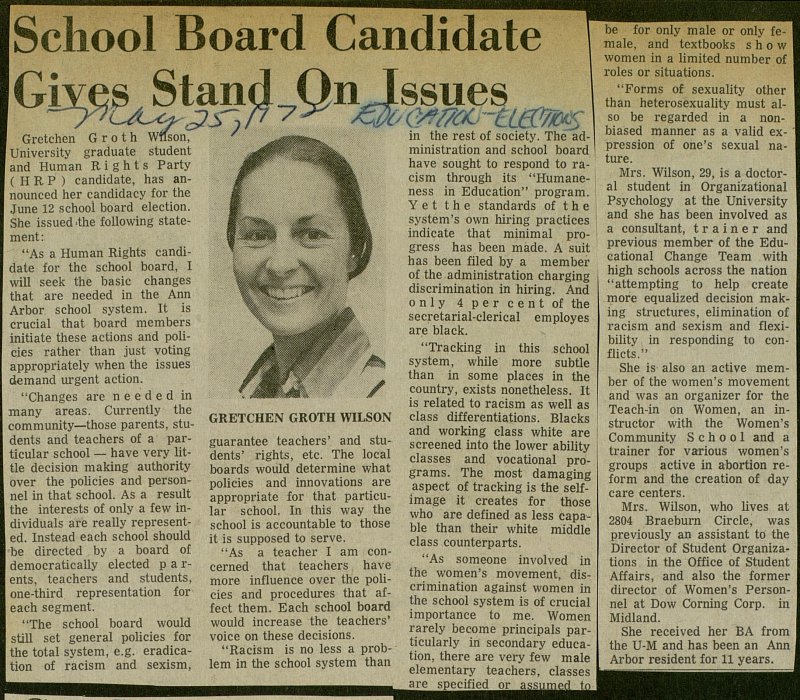 Gretchen G r o t h Wflson, University gradúate student and Human Rights Party ( H R P ) candidate, has announced her candidacy for the June 12 schooi board election. She issued .the following statement: "As a Human Rights candidate for the school board, I will seek the basic changes that are needed in the Ann Arbor school system. It is crucial that board members initiate these actions and policies rather than just voting appropriately when the issues demand urgent action. "Changes are needed in many areas. Currently the community- those parents, students and teachers of a particular school - have very little decisión making authority over the policies and personnel in that school. As a result the interests of only a few individuals are really represented. Instead each school should be directed by a board of democratically elected p a rents, teachers and students, one-third representation for each segment. "The school board would still set general policies for the total system, e.g. eradication of racism and sexism, guarantee teachers' and students' rights, etc. The local boards would determine what policies and innovations are appropriate for that particular school. In this way the school is accountable to those it is supposed to serve. "As a teacher I am concerned that teachers have more influence over the policies and procedures that affect them. Each school board would increase the teachers' voice on these decisions. "Racism is no less a problem in the school system than in the rest of society. The administration and school board have sought to respond to racism through its "Humaneness in Education" program. Y e t the standards of t h e system's own hiring practices indícate that minimal progress has been made. A suit has been filed by a member of the administration charging discrimination in hiring. And only 4 per cent of the secretarial-clerical employés are black. "Tracking in this school system, while more subtle than in some places in the country, exists nonetheless. It is related to racism as well as class differentiations. Blacks and working class white are screened into the lower ability classes and vocational programs. The most damaging aspect of tracking is the selfimage it creates for those who are defined as less capable than their white middle class counterparts. "As someone involved in the women's movement, discrimination against women in the school system is of crucial importance to me. Women rarely become principáis particularly in secondary education, there are very few male elementary teachers, classes are specified or assumerl tn be for only male or only female, and textbooks show women in a limited number of roles or situations. "Porms of sexuality other than heterosexuality must also be regarded in a nonbiased manner as a valid expression of one's sexual nature. Mrs. Wilson, 29, is a doctoral student in Organizational Psychology at the University and she has been involved as a consultant, trainer and previous member of the Educational Change Team with high schools across the nation "attempting to help créate more equalized decisión making structures, elimination of racism and sexism and flexibility in responding to conflicts." She is also an active member of the women's movement and was an organizer for the Teach-in on Women, an instructor with the Women's Community School and a trainer for various women's groups active in abortion reform and the creation of day care centers. Mrs. Wilson, who lives at 2804 Braeburn Circle, was previously an assistant to the Director of Student Organizations in the Office of Student Affairs, and also the former director of Women's Personnel at Dow Corning Corp. in Midland. She received her BA from the U-M and has been an Ann Arbor resident for 11 years.