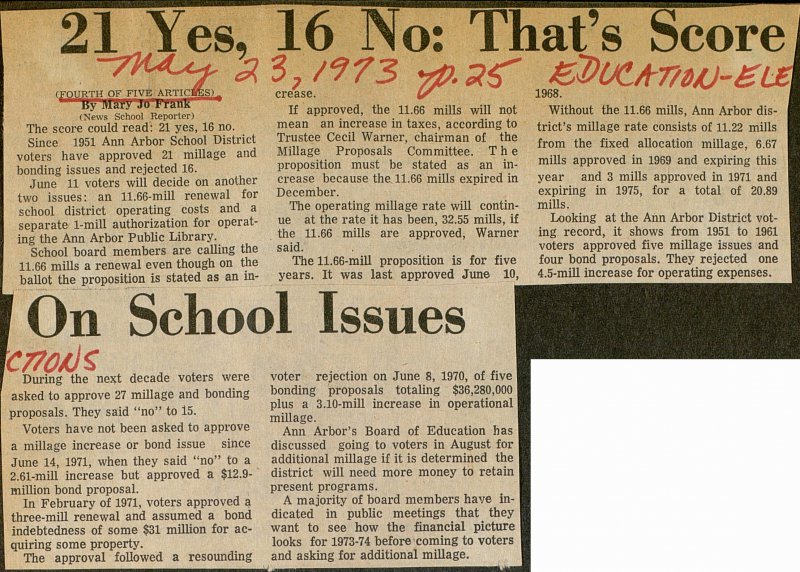 (FOURTH OF FIVE ARTICMES) . The score could read: 21 yes, 16 no. Since 1951 Ann Arbor School District voters have approved 21 millage and bonding issues and rejected 16. June 11 voters will decide on another two issues: an 11.66-mill renewal for school district operating costs and a separate 1-mill authorization for operating the Ann Arbor Public Library. School board members are calling the 11.66 milis a renewal even though on the ballot the proposition is stated as an crease. Lr If approved, the 11.66 milis will not mean an increase in taxes, according to Trustee Cecil Warner, chairman of the Millage Proposals Committee. The proposition must be stated as an increase because the 11.66 milis expired in December. The operating millage rate will continue at the rate it has been, 32.55 milis, if the 11.66 milis are approved, Warner said. The 11.66-mill proposition is for five years. It was last approved June 10, 1968. Without the 11.66 milis, Ann Arbor district's millage rate consists of 11.22 milis from the fixed allocation millage, 6.67 milis approved in 1969 and expiring this year and 3 milis approved in 1971 and expiring in 1975, for a total of 20.89 milis. Looking at the Ann Arbor District voting record, it shows from 1951 to 1961 voters approved five millage issues and four bond proposals. They rejected one 4.5-mill increase for operating expenses. During the next decade voters were asked to approve 27 millage and bonding proposals. They said "no" to 15. Voters have not been asked to approve a millage increase or bond issue since June 14, 1971, when they said "no" to a 2.61-mill increase but approved a $12.9million bond proposal. In February of 1971, voters approved a three-mill renewal and assumed a bond indebtedness of some $31 million for acquiring some property. The approval followed a resounding voter rejection on June 8, 1970, of five bonding proposals totaling $36,280,000 plus a 3.10-mill increase in operational millage. Ann Arbor's Board of Education has discussed going to voters in August for additional millage if it is determined the district will need more money to retain present programs. A majority of board members have indicated in public meetings that they want to see how the financial picture looks for 1973-74 before coming to voters and asking for additional millage.