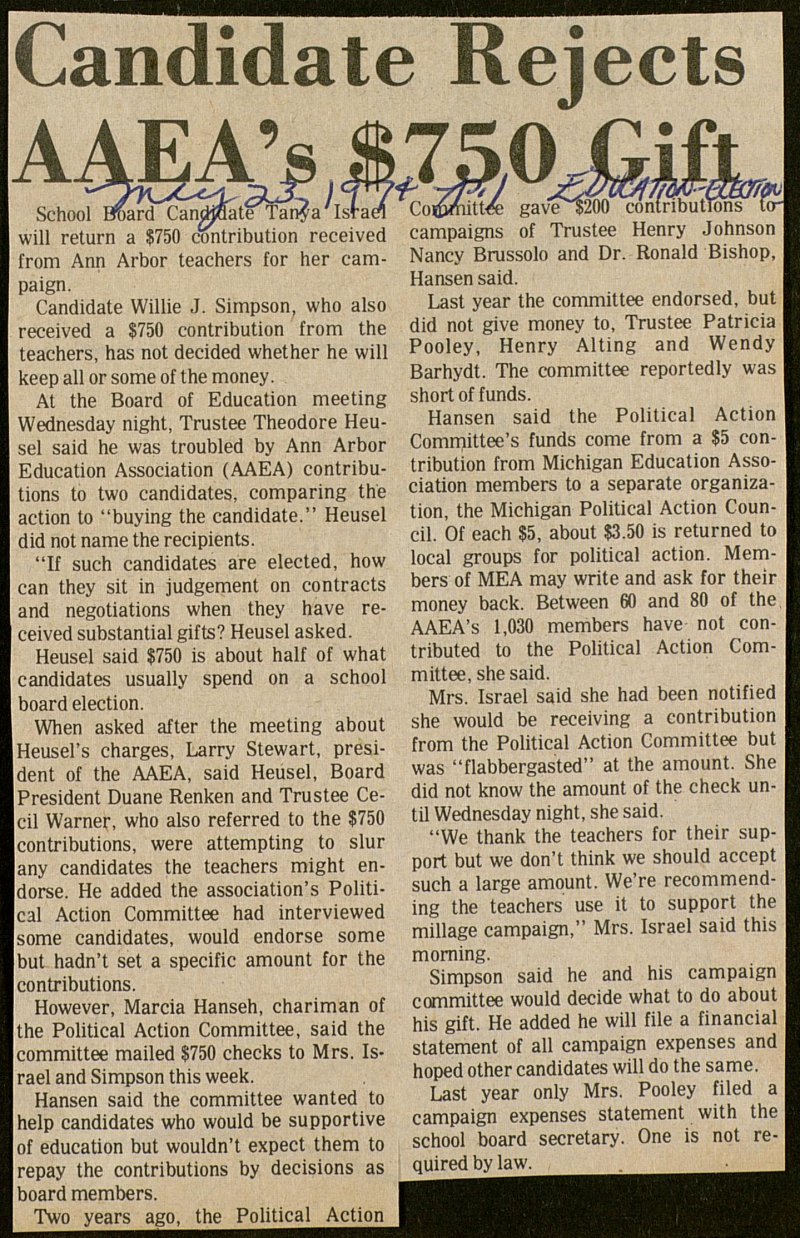 School mará Candíate Tartfa'lstael will return a $750 contribution received from Ann Arbor teachers for her campaign. Candidate Willie J. Simpson, who also received a $750 contribution from the teachers, has not decided whether he will keep all or some of the money . At the Board of Education meeting Wednesday night, Trustee Theodore Heusel said he was troubled by Ann Arbor Education Association (AAEA) contributions to two candidates, comparing the action to "buying the candidate." Heusel did not name the recipients. "If such candidates are elected, how can they sit in judgement on contracts and negotiations when they have received substantial gifts? Heusel asked. Heusel said $750 is about half of what candidates usually spend on a school board election. When asked after the meeting about Heusel's charges, Larry Stewart, president of the AAEA, said Heusel, Board President Duane Renken and Trustee Cecil Warner, who also referred to the $750 contributions, were attempting to slur any candidates the teachers might endorse. He added the association's Political Action Committee had interviewed some candidates, would endorse some put hadn't set a specific amount for the contributions. j However, Marcia Hanseh, chariman of the Political Action Committee, said the committee mailed $750 checks to Mrs. Israel and Simpson this week. Hansen said the committee wanted to help candidates who would be supportive pf education but wouldn't expect them to repay the contributions by decisions as board members. Two years ago, the Political Action CoOmitt gavePO contributíons tcrl campaigns of Trustee Henry Johnson I Nancy Brussolo and Dr. Ronald Bishop, I Hansen said. Last year the committee endorsed, but I did not give money to, Trustee Patricia I Pooley, Henry Alting and Wendy I Barhydt. The committee reportedly was I short of funds. Hansen said the Political Action Committee's funds come from a $5 contribution from Michigan Education Association members to a separate organization, the Michigan Political Action Council. Of each $5, about $3.50 is returned to local groups for political action. Members of MEA may write and ask for their money back. Between 60 and 80 of the AAEA's 1,030 members have not contributed to the Political Action Committee, she said. Mrs. Israel said she had been notified she would be receiving a contribution from the Political Action Committee but was "flabbergasted" at the amount. She did not know the amount of the check until Wednesday night, she said. "We thank the teachers for their support but we don't think we should accept such a large amount. We're recommending the teachers use it to support the millage campaign," Mrs. Israel said this morning. Simpson said he and his campaign committee would decide what to do about his gift. He added he will file a financial statement of all campaign expenses and hoped other candidates will do the same. Last year only Mrs. Pooley filed a campaign expenses statement with the school board secretary. One is not required by law. I