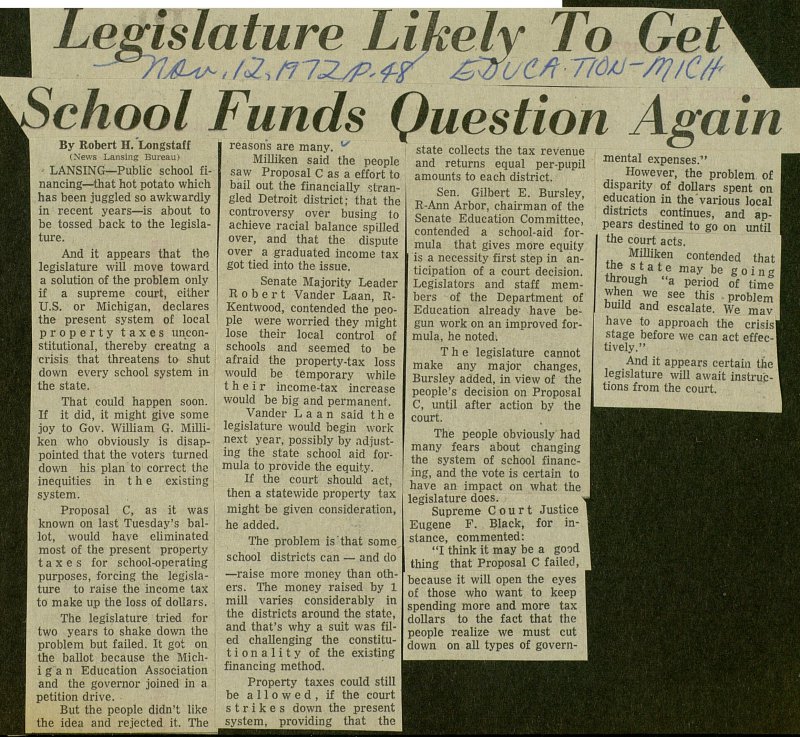 LANSING- Public school financing- that hot potato which has been juggled so awkwardly in recent years- is about to be tossed back to the legislature. And it appears that the legislature wiñ move toward a solution of the problem only if a supreme court, either U.S. or Michigan, declares the present system of local ' property taxes unconstitutional, thereby creatng a crisis that threatens to shut down every school system in the state. That could happen soon. If it did, it might give some joy to Gov. William G. Milliken who obviously is disappointed that the voters turned down his plan to correct the inequities in the existing system. Proposal C, as it was known on last Tuesday's ballot, would have eliminated most of the present property taxes for school-operating purposes, forcing the legislature to raise the income tax to make up the loss of dollars. The legislature tried for two years to shake down the problem but failed. It got on the ballot because the Michi g a n Education Association and the governor joined in a petition drive. But the people didn't like the idea and rejected it. The reasons are many. Milliken said the people saw Proposal C as a effort to bail out the financially strangled Detroit district; that the controversy over busing to achieve racial balance spilled over, and that the dispute over a graduated income tax got tied into the issue. Senate Majority Leader Kobert Vander Laan, ItKentwood, contended the people were worried they might lose their local control of schools and seemed to be afraid the property-tax loss would be temporary while their income-tax increase would be big and permanent. Vander Laan said the legislature would begin work next year, possibly by adjusting the state school aid formula to provide the equity. If the court should act, then a statewide property tax might be given consideration, he added. The problem is 'that some school districts can - and do - raise more money than others. The money raised by 1 mili varíes considerably in the districts around the state, and that's why a suit was filed challenging the constitutionality of the existing financing method. Property taxes could still be allowed, if the court strikes down the present system, providing that the state collects the tax revenue and returns equal per-pupil amounts to each district. Sen. Gilbert E. Bursley, R-Ann Arbor, chairman of the Senate Education Committee, contended a school-aid formula that gives more equity is a necessity first step in anticipation of a court decisión. Legislators and staff members of the Department of Education already have begun work on an improved formula, he notedi The legislature cannot make any major changes, Bursley added, in view of the people's decisión on Proposal C, until after action by the court. The people obviously had many fears about changing the system of school financing, and the vote is certain to have an impact on what the legislature does. ■ Suprema Court Justice ! Eugene F. Black, for instance, commented: "I think it may be a good thing that Proposal C failed, because it will open the eyes I of those who want to keep spending more and more tax dollars to the fact that the people realize we must cut down on all types of mental expenses." However, the problem of disparity of dollars spent on education in the'various local districts continúes, and appears destined to go on until the court acts. Milliken contended that the state may be going through "a period of time when we see this problem Diuld and escálate. We mav have to approach the crisis stage before we can act effectively." And it appears certain the legislature will await instructions from the court.