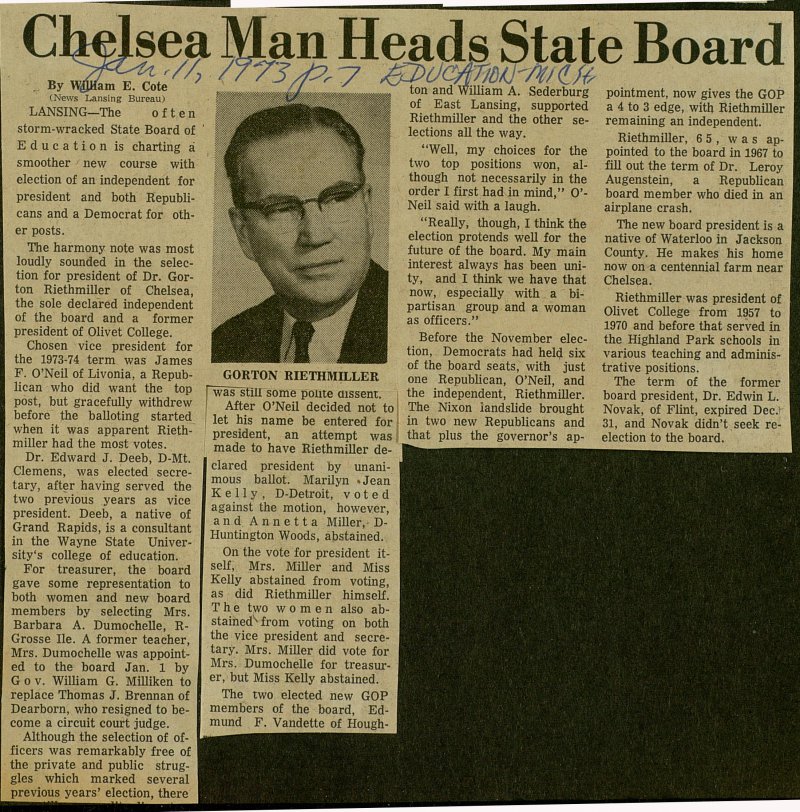 LANSING- The o f t e n storm-wracked State Board of ' Education is charting á smoother new course with election of an independent for president and both Republicans and a Democrat for other posts. The harmony note was most loudly sounded in the selection for president of Dr. Gorton Riethmiller of Chelsea, the sole declared independent of the board and a former president of Olivet College. Chosen vice president for the 1973-74 term was James F. O'Neil of Livonia, a Republican who did want the top post, but gracefully withdrew before the balloting started when it was apparent Riethmiller had the most votes. Dr. Edward J. Deeb, D-Mt. Clemens, was elected secretary, after having served the two previous years as vice president. Deeb, a native of Grand Rapids, is a consultant in the Wayne State University's college of education. For treasurer, the board gave some representaron to both women and new board members by selecting Mrs. Barbara A. Dumochelle, RGrosse He. A former teacher, Mrs. Dumochelle was appointed to the board Jan. 1 by G o v. William G. Milliken to replace Thomas J. Brennan of Dearborn, who resigned to become a circuit court judge. Although the selection of officers was remarkably free of the private and public struggles which marked several previous years' election, there wasstlIL some poiite dissent. After O'Neil decided not to let his name be entered for president, an attempt was made to have Kiethmiller declared president by unanimous ballot. Marilyn .Jean Kelly, D-Detroit, v o t e d against the motion, however, and Annetta DHuntington Woods, abstained. On the vote for president itself, Mrs. Miller and Miss Kelly abstained from voting, as did Riethmiller himself. The two w o m e n also abstained from voting on both the vice president and secretary. Mrs. Miller did vote for Mrs. Dumochelle for treasurer, but Miss Kelly abstained. The two elected new GOP members of the board, Edmund F. Vandette of ton and William A. Sederburg of East Lansing, supported Riethmiller and the other selections all the way. "Well, my choices for the two top positions won, although not necessarily in the order I first had in mind," 0'Neil said with a laugh. "Really, though, I think the election protends well for the future of the board. My main interest always has been unity, and I think we have that now, especially with a bipartisan group and a woman as officers." Before the November election, Democrats had held six of the board seats, with just one Republican, O'Neil, and the independent, Riethmiller. The Nixon iandslide brought in two new Republicans and that plus the governor's pointment, now gives the GOP a 4 to 3 edge, with Riethmiller remaining an independent. Riethmiller, 6 5, was appointed to the board in 1967 to fill out the term of Dr. Leroy Augenstein, a Republican board member who died in an airplane crash. The new board president is a native of Waterloo in Jackson County. He makes his home now on a centennial farm near Chelsea. Riethmiller was president of Olivet College from 1957 to 1970 and before that served in the Highland Park schools in various teaching and I trative positions. The term of the former board president, Dr. Edwin L. Novak, of Flint, expired Deo 31, and Novak didn't seek reelection to the board.