Levin A Worthy Opponent Of Milliken, In November 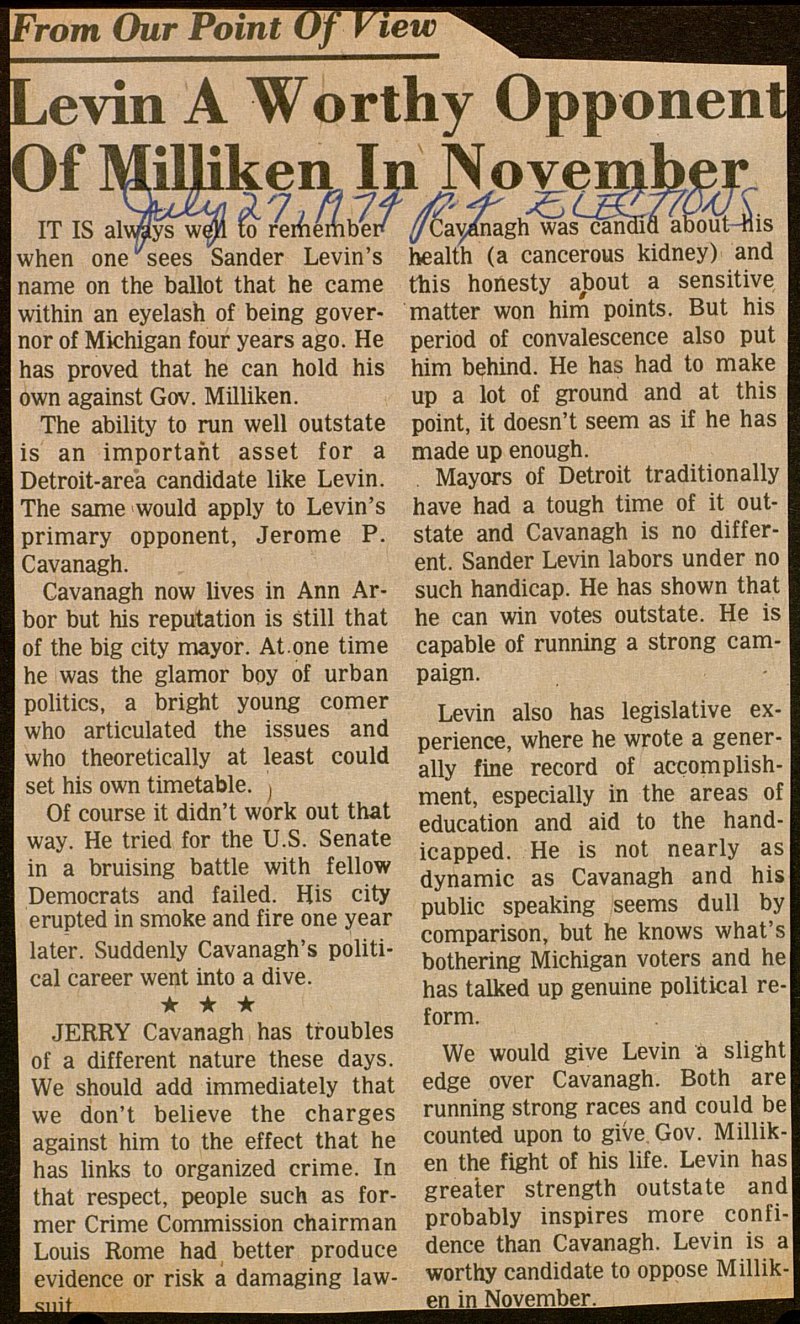 IT IS alvyays wpl to remember when one sees Sander Levin's name on the ballot that he came within an eyelash of being governor of Michigan four years ago. He has proved that he can hold his own against Gov. Milliken. The ability to run well outstate is an important asset for a Detroit-area candidate like Levin. The same would apply to Levin's primary opponent, Jerome P. Cavanagh. Cavanagh now lives in Ann Arbor but his reputation is still that of the big city mayor. At. one time he was the glamor boy of urban politics, a bright young corner who articulated the issues and who theoretically at least could set his own timetable. i Of course it didn't work out that way. He tried for the U.S. Senate in a bruising battle with fellow Democrats and failed. His city erupted in smoke and fire one year later. Suddenly Cavanagh's political career went into a di ve. JERRY Cavanagh has troubles of a different nature these days. We should add immediately that we don't believe the charges against him to the effect that he has links to organized crime. In that respect, people such as former Crime Commission chairman Louis Rome had better produce evidence or risk a damaging lawRllit ,Caynagh wascándífi about-His j health (a cancerous kidney) and this honesty about a sensitive matter won him points. But his I period of convalescence also put him behind. He has had to make up a lot of ground and at this point, it doesn't seem as if he has made up enough. Mayors of Detroit traditionally have had a tough time of it 1 state and Cavanagh is no different. Sander Levin labors under no such handicap. He has shown that he can win votes outstate. He is capable of running a strong campaign. Levin also has legislative experience, where he wrote a generally fine record of accomplishment, especially in the áreas of education and aid to the handicapped. He is not nearly as dynamic as Cavanagh and his public speaking seems dull by comparison, but he knows what's bothering Michigan voters and he has talked up genuine political reform. We would give Levin á slight edge over Cavanagh. Both are running strong races and could be counted upon to give Gov. Milliken the fight of his life. Levin has greater strength outstate and probably inspires more confidence than Cavanagh. Levin is a worthy candidate to oppose Milliken in N'hpr - m