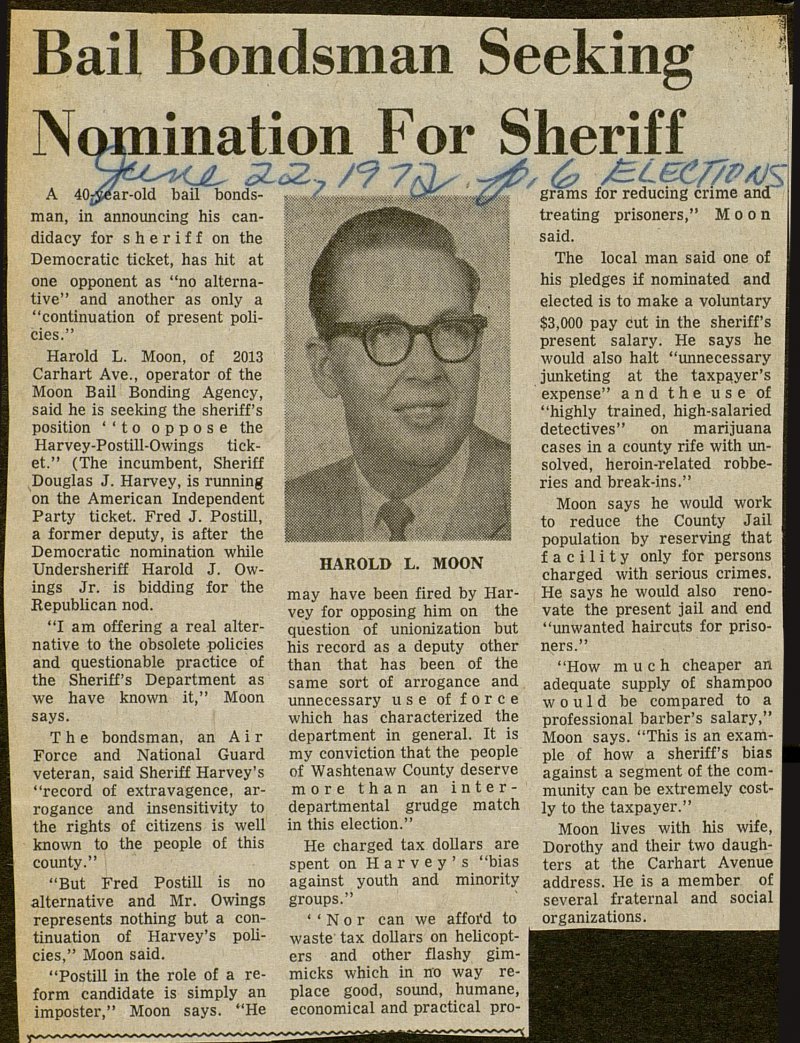 A 40-year-old bail bondsman, in announcing his candidacy for sheriff on the Democratic ticket, has hit at one opponent as "no alternative" and another as only a "continuation of present policies." Harold L. Moon, of 2013 Carhart Ave., operator of the Moon Bail Bonding Agency, said he is seeking the sheriff's position ''to oppose the Harvey-Postill-Owings ticket." (The incumbent, Sheriff Douglas J. Harvey, is running on the American Independent Party ticket. Fred J. Postill, a former deputy, is after the Democratic nomination while Undersheriff Harold J. Owings Jr. is bidding for the Republican nod. "I am offering a real alternative to the obsolete policies and questionable practice of the Sheriff's Department as we have known it," Moon says. The bondsman, an Air Force and National Guard veteran, said Sheriff Harvey's "record of extravagence, arrogance and insensitivity to the rights of citizens is well known to the people of this county." "But Fred Postill is no alternative and Mr. Owings represents nothing but a continuation of Harvey's policies," Moon said. "Postill in the role of a reform candidate is simply an imposter," Moon says. "He may have been fired by Harvey for opposing him on the question of unionization but his record as a deputy other than that has been of the same sort of arrogance and unnecessary use of force which has characterized the department in general. It is my conviction that the people of Washtenaw County deserve more than an interdepartmental grudge match in this election." He charged tax dollars are spent on Harvey's "bias against youth and minority groups." ''Nor can we afford to waste tax dollars on helicopters and other flashy gimmicks which in no way replace good, sound, humane, economical and practical grams for reducmg crime and treating prisoners," Moon said. The local man said one of his pledges if nominated and elected is to make a voluntary $3,000 pay cut in the sheriff's present salary. He says he would also halt "unnecessary junketing at the taxpayer's expense" and the use of "highly trained, high-salaried detectives" on marijuana cases in a county rife with unsolved, heroin-related robberies and break-ins." Moon says he would work to reduce the County Jail population by reserving that facility only for persons charged with serious crimes. He says he would also renovate the present jail and end "unwanted haircuts for prisoners." "How much cheaper an adequate supply of shampoo would be compared to a professional barber's salary," Moon says. "This is an example of how a sheriff's bias against a segment of the community can be extremely costly to the taxpayer." Moon lives with his wife, Dorothy and their two daughters at the Carhart Avenue address. He is a member of several fraternal and social organizations.