Views Of Candidates In Fourth Divergent 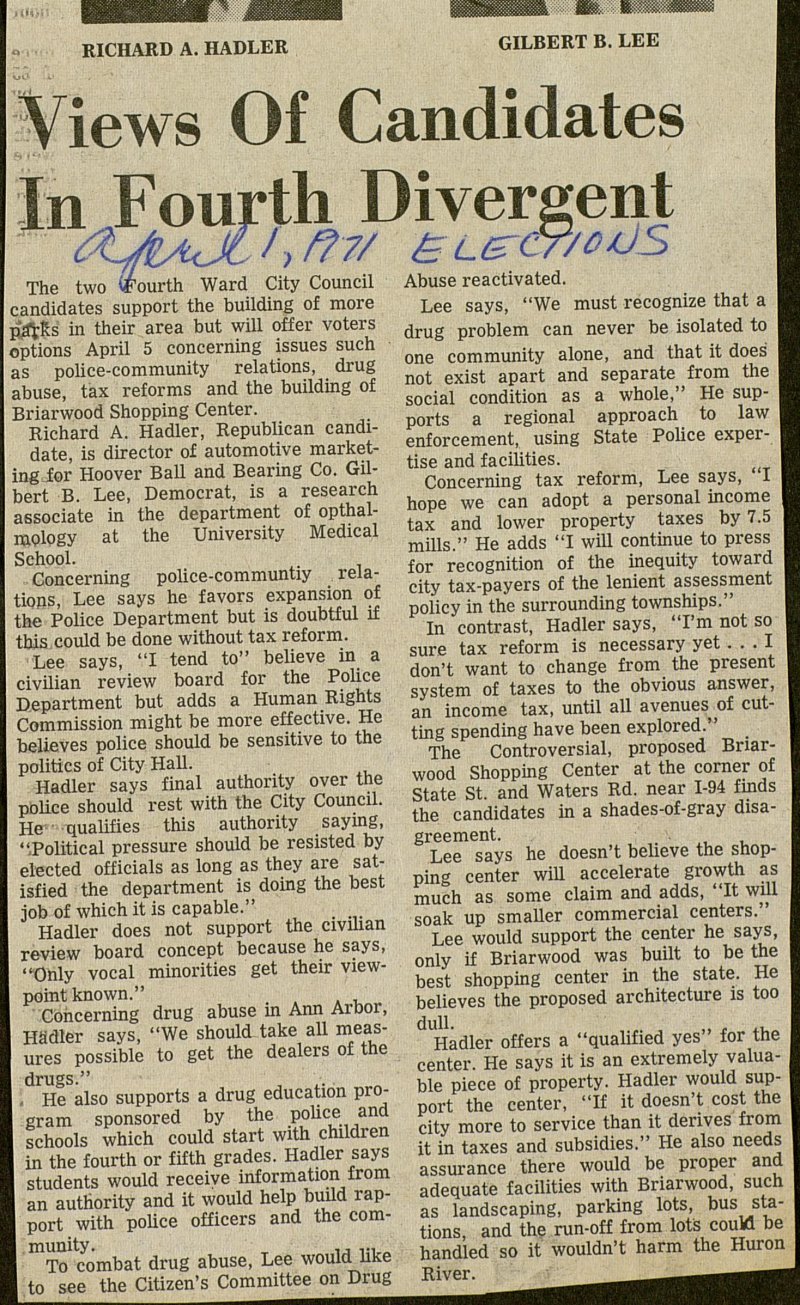 The two (fourth Ward City Council . candidates support the building of more p;$&s in their area but will offer voters ( options April 5 concerning issues such as police-community relations, drug abuse, tax reforms and the building of Briarwood Shopping Center. Richard A. Hadier, Republican candidate, is director of automotive marketing for Hoover Ball and Bearing Co. Gilbert B. Lee, Democrat, is a research associate in the department of opthalrnology at the University Medical School. Concerning police-communtiy relations, Lee says he favors expansión of the Pólice Department but is doubtful if tbis could be done without tax reform. Lee says, "I tend to" believe in a civilian review board for the Pólice Department but adds a Human Rights Commission might be more effective. He believes pólice should be sensitive to the politics of City Hall. Hadier says final authority over the pólice should rest with the City Council. He qualifies this authority saying, "Political pressure should be resisted by elected officials as long as they are satisfied the department is doing the best job of which it is capable." Hadier does not support the civüian review board concept because he says, "Only vocal minorities get their viewpointknown." Concerning drug abuse in Ann Arbor, Hadier says, "We should take all measures possible to get the dealers of the i , He also supports a drug education program sponsored by the pólice and schools which could start with children in the fourth or fifth grades. Hadier says students would receive information from an authority and it would help buüd rapport with poüce officers and the comI munity. . , ... To combat drug abuse, Lee would like to see the Citizen's Committee on Drug Abuse reactivated. Lee says, "We must recognize that a I drug problem can never be isolated to I one community alone, and that it does I not exist apart and separate from the I social condition as a whole," He I ports a regional approach to law I enforcement, using State Pólice I tise and facilities. I Concerning tax reform, Lee says, I I hope we can adopt a personal income I tax and lower property taxes by 7.5 I milis." He adds "I will continue to press I for recognition of the inequity toward I city tax-payers of the lenient assessment policy in the surrounding townships." In contrast, Hadier says, "I'm not so sure tax reform is necessary yet . . . I don't want to change from the present system of taxes to the obvious answer, an income tax, until all avenues of cutting spending have been explored." The Controversial, proposed Briarwood Shopping Center at the corner of State St. and Waters Rd. near 1-94 fmds the candidates in a shades-of-gray disagreement. , i_ Lee says he doesn't believe the shopping center will accelerate growth as much as some claim and adds, "It wül soak up smaller commercial centers. Lee would support the center he says, only if Briarwood was built to be the best shopping center in the state. He believes the proposed architecture is too Hadier offers a "qualified yes" for the center. He says it is an extremely valuable piece of property. Hadier would support the center, "If it doesn't cost the city more to service than it derives from it in taxes and subsidies." He also needs assurance there would be proper and adequate facilities with Briarwood, such as landscaping, parking lots, bus stations, and the run-off from lots coulö be handled so it wouldn't harm the Huron River. M