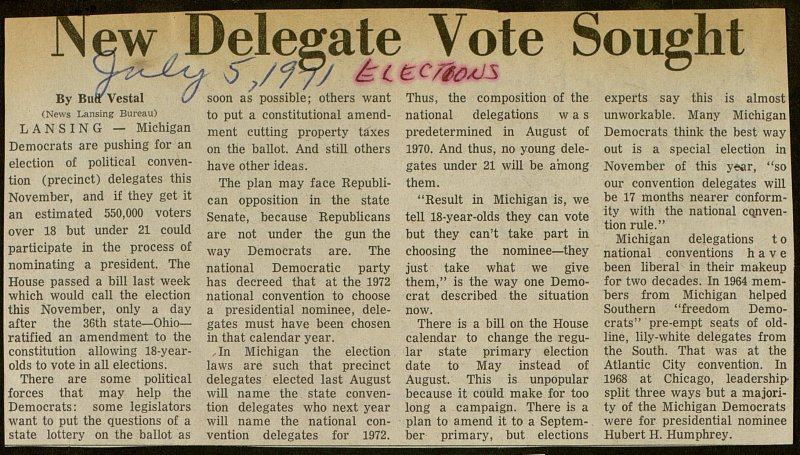 LANSING - Michigan Democrats are pushing for an election of political convention (precinct) delegates this November, and if they get it an estimated 550,000 voters over 18 but under 21 could participate in the process of nominating a president. The House passed a bilí last week which would cali the election this November, only a day after the 36th state- Ohio- ratified an amendment to the constitution allowing 18-yearolds to vote in all elections. There are some political forces that may help the Democrats: some legislators want to put the questions of a state lottery on the ballot as r . V ? =■ v. soon as possible; others want to put a constitutional amendment cutting property taxes on the ballot. And still others have other ideas. The plan may face Republican opposition in the state Senate, because Republicans are not under the gun the way Democrats are. The national Democratie party has decreed that at the 1972 national convention to choose a presidential nominee, delegates must have been chosen in that calendar year. In Michigan the election laws are such that precinct delegates elected last August will name the state convention delegates who next year will name the national convention delegates for 1972. "- f WIS'-' - Thus, the composition of the national delegations was predetermined in August of 1970. And thus, no young delegates under 21 will be a'mong them. "Result in Michigan is, we teil 18-year-olds they can vote but they can't take part in choosing the nominee- they just take what we give them," is the way one Democrat described the situation now. There is a bilí on the House calendar to change the regular state primary election date to May instead of August. This is unpópular because it could make for too long a campaign. There is a plan to amend it to a September primary, but elections experts say this is almostl unworkable. Many Michigan! Democrats think the best wayl out is a special election in I November of this y ar, "so our convention delegates will ] be 17 months nearer conformity with the national cojiventionrule." Michigan delegations t o national conventions have been liberal in their makeup for two decades. In 1964 members from Michigan helped Southern "freedom Democrats" pre-empt seats of oldline, lily-white delegates from the South. That was at the Atlantic City convention. In 1968 at Chicago, leadershipsplit three ways but a majority of the Michigan Democrats were for presidential nominee Hubert H. Humphrey.