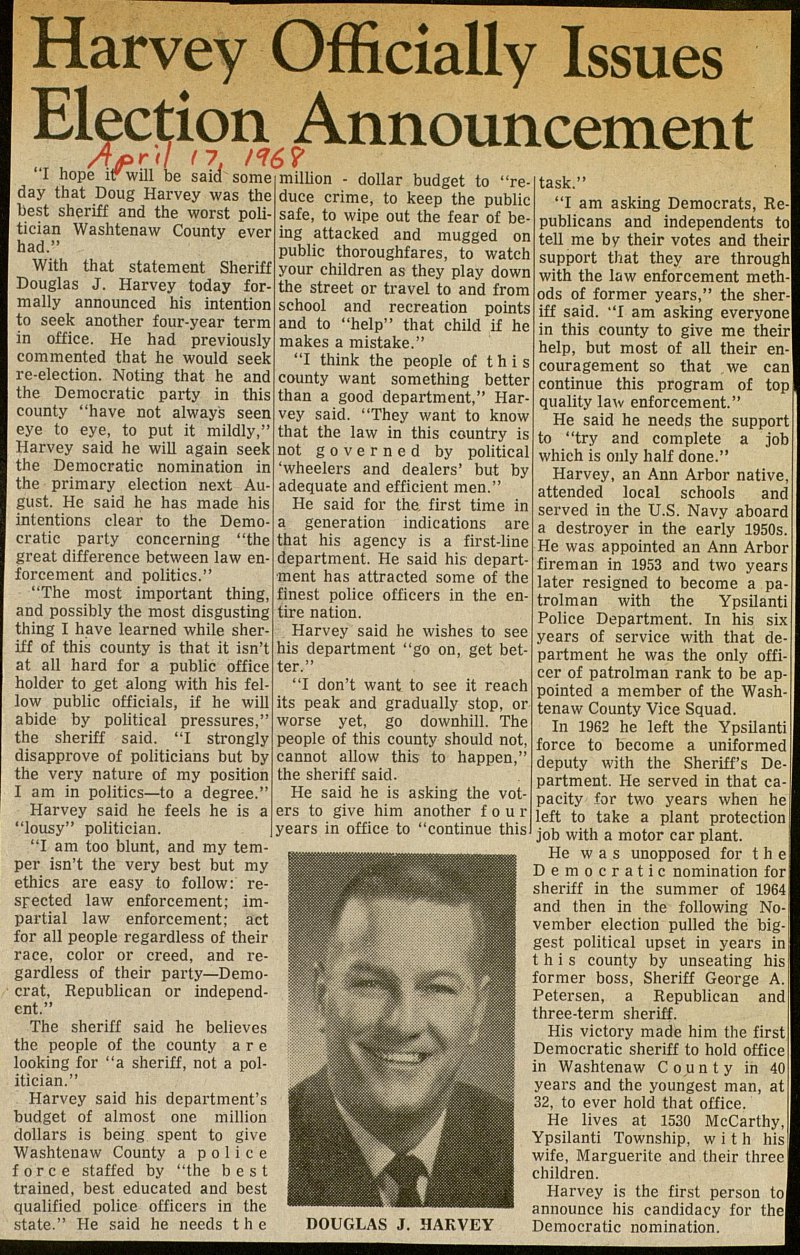 "I hope it will be said some day that Doug Harvey was the best sheriff and the worst politician Washtenaw County ever had." With that statement Sheriff Douglas J. Harvey today formally announced his intention to seek another four-year term in office. He had previously commented that he would seek re-election. Noting that he and the Democratic party in this county "have not alway's seen eye to eye, to put it mildly," Harvey said he will again seek the Democratic nomination in the primary election next August. He said he has made his intentions clear to the Democratie party concerning "the great difference between law enforcement and politics." "The most important thing, and possibly the most disgusting thing I have learned while sheriff of this county is that it isn't at all hard for a public office holder to et along with his fellow public officials, if he will abide by political pressures," the sheriff said. "I strongly disapprove of politicians but by the very nature of my position I am in politics- to a degree." Harvey said he feels he is a "lousy" politician. "I am too blunt, and my temper isn't the very best but my ethics are easy to follow: respected law enforcement; impartial law enforcement; act for all people regardless of their race, color or creed, and regardless of their party - Democrat, Republican or independent." The sheriff said he believes the people of the county are looking for "a sheriff, not a politician." Harvey said his department's budget of almost one million dollars is being spent to give Washtenaw County a pólice forcé staffed by "the best trained, best educated and best qualified pólice officers in the state." He said he needs the million - dollar budget to "reduce crime, to keep the public safe, to wipe out the fear of being attacked and mugged on public thoroughfares, to watch your children as they play down the street or travel to and from school and recreation points and to "help" that child if he makes a mistake." "I think the people of t h i s county want something better than a good department," Harvey said. "They want to know that the law in this country is not governed by political 'wheelers and dealers' but by adequate and efficiënt men." He said for the. first time in a generation indications are that his agency is a first-line department. He said his department has attracted some of the finest pólice officers in the entire nation. Harvey said he wishes to see his department "go on, get better." "I don't want to see it reach its peak and gradually stop, or worse yet, go downhill. The people of this county should not, cannot allow this to happen," the sheriff said. He said he is asking the voters to give him another f o u r years in office to "continue this task." "I am askirtg Democrats, Republicans and independents to teil me by their votes and their support that they are through with the law enforcement methods of former years," the sheriff said. ''I am asking everyone in this county to give me their help, but most of all their encouragement so that .we can continue this program of top quality law enforcement." He said he needs the support to "try and complete a job which is only half done." Harvey, an Ann Arbor native, attended local schools and served in the U.S. Navy aboard a destróyer in the early 1950s. He was appointed an Ann Arbor fireman in 1953 and two years later resigned to become a patrolman with the Ypsilanti Pólice Department. In his six years of service with that department he was the only officer of patrolman rank to be appointed a member of the Washtenaw County Vice Squad. In 1962 he left the Ypsilanti force to become a uniformed deputy with the Sheriff's Department. He served in that capacity for two years when he left to take a plant protection job with a motor car plant. He was unopposed for the Democratie nomination for sheriff in the summer of 1964 and then in the following No-I vember election pulled the biggest political upset in years in this county by unseating his former boss, Sheriff George A. Petersen, a Republican and three-term sheriff. His victory made him the first Democratie sheriff to hold office in Washtenaw County in 40 years and the youngest man, at 32, to ever hold that office. He lives at 1530 McCarthy, Ypsilanti Township, with his wife, Marguerite and their three children. Harvey is the first person tol announce his candidacy for the! Democratie nomination. ;