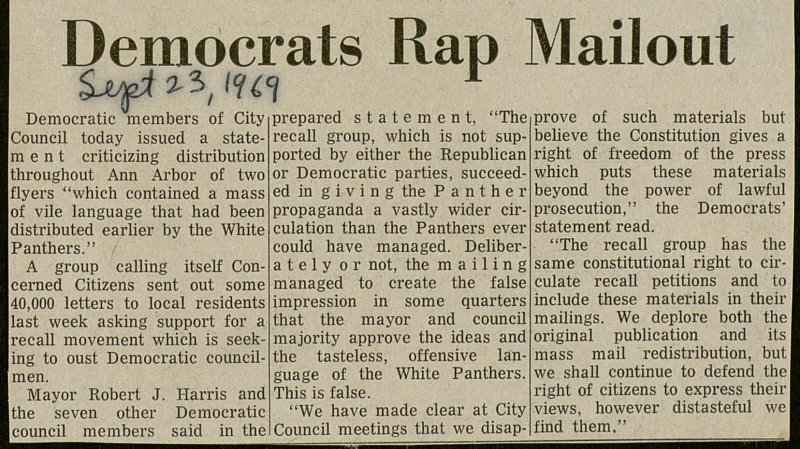 Democratic members of City Council today issued a statein e n t criticizing distribution throughout Ann Arbor of two flyers "which contained a mass of vile language that had been distributed earlier by the White Panthers." A group calling itself Concerned Citizens sent out some 40,000 letters to local residents last week asking support for a recall movement which is seeking to oust Democratie councilmen. Mayor Robert J. Harris and the seven other Democratie council members said in the I prepared statement, "The recall group, which is not supported by either the Republican or Democratie parties, succeeded in giving the P a n t h e r propaganda a vastly wider circulation than the Panthers ever could have managed. Delibera t e 1 y o r not, the mailing managed to créate the false impression in some quarters that the mayor and council majority approve the ideas and the tasteless, offensive language of the White Panthers. This is false. "We have made clear at City Council meetings that we prove of such m ateríais but believe the Constitution gives a right of freedom of the press which puts these materials beyond the power of lawful prosecution," the Democrats' statement read. "The recall group has the same constitutional right to circuíate recall petitions and to include these materials in their mailings. We deplore both the original publication and its mass mail redistribution, but we shall continue to defend the right of citizens to express their views, however distasteful we find them,"