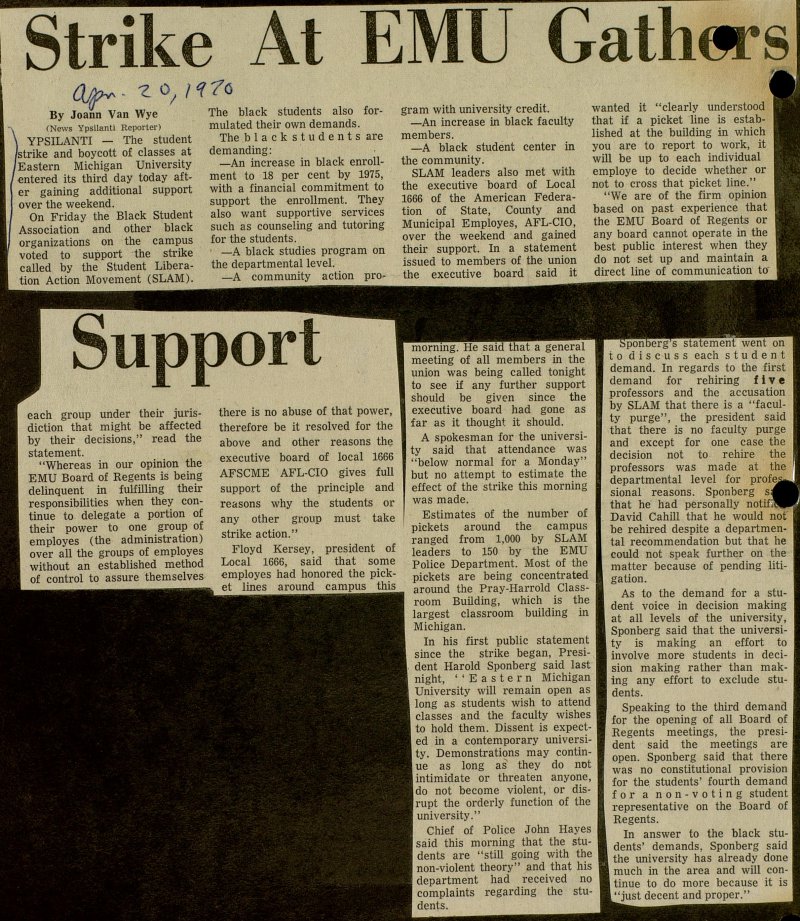 ÍYPSILANTI - The student strike and boycott of classes at Eastern Michigan University entered its third day today after gaining additional support over the weekend. On Friday the Black Student Association and other black I organizations on the campus voted to support the strike called by the Student Liberation Action Movement (SLAM). The black students also formulated their own demands. The blackstudentsare demanding: - An increase in black enrollment to 18 per cent by 1975, with a financial commitment to support the enrollment. They also want supportive services such as counseling and tutoring for the students. ' - A black studies program on the departmental level. - A community action gram with university credit. - An increase in black faculty members. - A black student center in the community. SLAM leaders also met with the executive board of Local 1666 of the American Federation of State, County and Municipal Employés, AFL-CIO, over the weekend and gained their support. In a statement issued to members of the union the executive board said it ■wanted it "clearly understood that if a picket line is established at the building in which you are to report to work, it will be up to each individual employé to decide whether or not to cross that picket line." "We are of the firm opinión based on past experience that the EMU Board of Regents or any board cannot opérate in the best public interest when they do not set up and maintain a direct line of communication to' each group under their jurisdiction that might be affected by their decisions," read the statement. "Whereas in our opinión the EMU Board of Regents is being delinquent in fulfilling their responsibilities when they continue to delégate a portion of their power to one group of employés (the administration) over all the groups of employés without an established method of control to assure themselves there is no abuse of that power, therefore be it resolved for the above and other reasons the executive board of local 1666 AFSCME AFL-CIO gives full support of the principie and reasons why the students or any other group must take strike action." Floyd Kersey, president of Local 1666, said that some employés had honored the pick. et lines around campus this morning. He said that a general meeting of all members in the union was being called tonight to see if any further support should be given since the executive board had gone as f ar as it thoughi; it should. A spokesman for the university said that attendance was "below normal for a Monday" but no attempt to estímate the effect of the strike this morning was made. Estimates of the number of pickets around the campus ranged from 1,000 by SLAM leaders to 150 by the EMU Pólice Department. Most of the pickets are being concentrated around the Pray-Harrold Classroom Building, which is the largest classroom building in Michigan. In his first public statement since the strike began, President Harold Sponberg said last night, ' ' E a s t e r n Michigan University will remain open as long as students wish to attend classes and the faculty wishes I to hold them. Dissent is expected in a contemporary university. Demonstrations may continue as long as they do not I intimídate or threaten anyone, Ido not become violent, or disIrupt the ordeiiy function of the I university." Chief of Pólice John Hayes said this morning that the students are "still going with the violent theory" and that his department had received no complaints regarding the students. Spönberg's statement went on to discuss each student demand. In regards to the first demand for rehiring fiye professors and the accusation by SLAM that there is a "faculty purge", the president said that there is no faculty purge and except for one case the decisión not to rehire the professors was made at the departmental level for profe sional reasons. Sponberg sfl that he had personally notifiP David Cahill that he would not be rehired despite a departmental recommendation but that he could not speak further on the matter because of pending litigation. As to the demand for a student voice in decisión making at all levéis of the university, Sponberg said that the university is making an effort to involve more students in decisión making rather than making any effort to exclude students. Speaking to the third demand for the opening of all Board of Regents meetings, the president said the meetings are open. Sponberg said that there was no constitutional provisión for the students' fourth demand for a non-voting student representative on the Board of Regents. In answer to the black stui dents' demands, Sponberg said the university has already done I much in the area and will conI tinue to do more because it is I "just decent and proper."