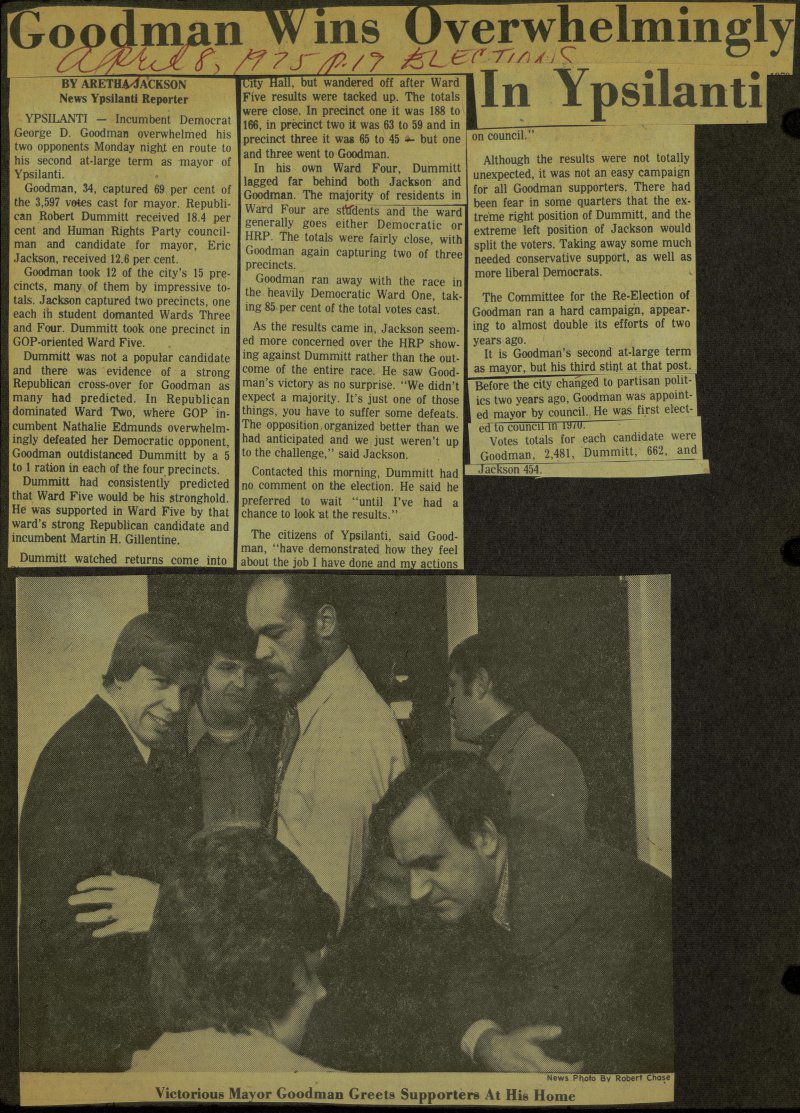 YPSILANTI - Incumbent Democrat George D. Goodman overwhelmed his two opponents Monday nighl en route to his second at-large term as mayor of Ypsilanti. Goodman, 34, captured 69 per cent of the 3,597 votes cast for mayor. Republican Robert Dummitt received 18.4 per cent and Human Rights Party councilman and candidate for mayor, Eric Jackson, received 12.6 per cent. Goodman took 12 of the city's 15 precincts, many of them by impressive totals. Jackson captured two precincts, one each ih student domanted Wards Three and Four. Dummitt took one precinct in GOP-oriented Ward Five. Dummitt was not a popular candidate and there was evidence of a strong Republican cross-over for Goodman as many had predicted. In Republican dominated Ward Two, where GOP incumbent Nathalie Edmunds overwhelmingly defeated her Democratie opponent, Goodman outdistanced Dummitt by a 5 to 1 ration in each of the four precincts. Dummitt had consistently predicted that Ward Five would be his gtronghold. He was supported in Ward Five by that ward's strong Republican candidate and incumbent Martin H. Gillentine. Dummitt watched returns come into Pí!y"EáTl, but wandered off after Ward Five results were tacked up. The totals were close. In precinct one it was 188 to 166, in precinct two it was 63 to 59 and in precinct three it was 65 to 45 - but one and three went to Goodman. In his own Ward Four, Dummitt lagged far behind both Jackson and Goodman. The majority of residents in Ward Four are sttídenti and the ward generally goes either Democratie or HRP. The totals were fairly close, with Goodman again capturing two of three precincts. Goodman ran away with the race in the heavily Democratie Ward One, taking 85 per cent of the total votes cast. As the results carne in, Jackson seemed more concerned over the HRP showing against Dummitt rather than the outcome of the entire race. He saw Goodman's victory as no surprise. "We didn't expect a majority. It's just one of those things, you have to suffer some defeats. The opposition.organized better than we had anticipated and we just weren't up to the challenge," said Jackson. Contacted this morning, Dummitt had no comment on the election. He said he preferred to wait "until I've had a chance to look at the results." The citizens of Ypsilanti, said Goodman, "have demonstrated how they feel about the job I have done and my actions 1 on council." Although the results were not totally I unexpected, it was not an easy campaign I fof all Goodman supporters. There had I been fear in some quarters that the 1 treme right position of Dummitt, and the I extreme left position of Jackson wóuldl split the voters. Taking away some much I needed conservative support, as well as I more liberal Democrats. The Committee for the Re-Election of I Goodman ran a hard campaign, I ing to almost doublé its efforts of two I years ago. It is Goodman's second at-large term I as mayor, but his third stipt at that postl ' Before the city changed to partisan polil ics two years ago, Goodman was 1 I ed mayor by council. He was first 1 ed to council in 19 u. Votes totals for each candidate were L Goodman, 2,481, Dummitt,_662nd Dackson 454. .