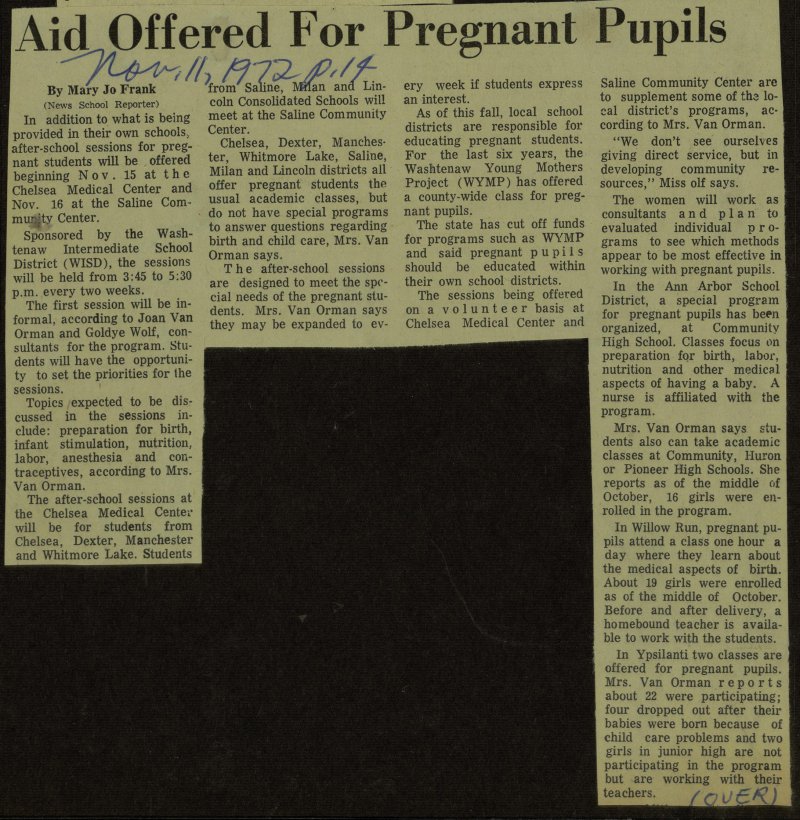 In addition to what is being provided in their own schools, after-school sessions for pregnant students will be offered beginning N o v . 15 at the Chelsea Medical Center and Nov. 16 at the Saline Commuity Center. Sponsored by the Washtenaw Intermedíate School District (WISD), the sessions will be held f rom 3:45 to 5:30 p.m. every two weeks. The first session will be informal, according to Joan Van Orman and Goldye Wolf, consultants for the program. Students will have the opportunity to set the priorities for the sessions. Topics expected to be discussed in the sessions include: preparation for birth, infant stimulation, nutrition, labor, anesthesia and contraceptives, according to Mrs. Van Orman. The after-school sessions at the Chelsea Medical Center will be for students from Chelsea, Dexter, Manchester and Whitmore Lake. Students from Saline, Mían and Lincoln Consolidated Schools will meet at the Saline Community Center. Chelsea, Dexter, Manchester, Whitmore Lake, Saline, Milan and Lincoln districts all offer pregnant students the usual academie classes, but do not have special programs to answer questions regarding birth and child care, Mrs. Van Orman says. The after-school sessions are designed to meet the special needs of the pregnant students. Mrs. Van Orman says they may be expanded to ery week if students express an interest. As of this fall, local school districts are responsible for educating pregnant students. For the last six years, the Washtenaw Young Mothers Project (WYMP) has offered a county-wide class for pregnant pupils. The state has cut off funds for programs such as WYMP and said pregnant pupils should be educated within their own school districts. The sessions being offered on a volunteer basis at Chelsea Medical Center and Saline Community Center are I to supplement some of tha 1 cal district's programs, 1 cording to Mrs. Van Orman. "We don't see ourselves 1 giving direct service, but in I developing community 1 sources," Miss olf says. The women will work as I consultants and plan tol evaluated individual p r 1 grams to see which methods I appear to be most effective in I working with pregnant pupils. ] In the Ann Arbor School I District, a special program I for pregnant pupils has been I organized, at Community I High School. Classes focus on I preparation for birth, labor, I nutrition and other medical I aspects of having a baby. A I nurse is affiliated with the I program. Mrs. Van Orman says 1 dents also can take academie I classes at Community, Hurón I or Pioneer High Schools. She I reports as of the middle of I October, 16 girls were I rolled in the program. In Willow Run, pregnant I pils attend a class one hour a I day where they learn about I the medical aspects of birth. I About 19 girls were enrolled I as of the middle of October. I Before and after delivery, a I homebound teacher is I I ble to work with the students. I In Ypsilanti two classes are 1 offered for pregnant pupils. I I Mrs. Van Orman reports I I about 22 were participating; I I four dropped out after their I I babies were born because of I I child care problems and two I I girls in junior high are not I participating in the program I but are working with their Iteachersx-lJ
two classes for pregnant 1 I pils, students also attend I I regular classes. With the exception of I I coln Consolidated Schools, all I I the districts offer flexible I I scheduling for pregnant I I dents, Miss Wolf says. However, last spring I I coln was the one school in the I I ouüying área of the WISD I which planned group work for I pregnant pupils, she adds. I The consultants estimate I about 21 girls have been idenI tified as pregnant and have I remained in school in the sevI en outlying áreas in the I WISD. Miss Wolf says a number of I I giris aren't being identified as I I pregnant. "We figure at least I ■ 50 per cent who are pregnant I ■ aren't identified," she adds. I Reasons they would not be I ■ known to be pregnant I ■ elude: student drops out, the I I baby is bom in the sumraer I ■ and student returns to school; I I miscarriages and abortions. ■ For those students who are I ■ pregnant and lemain in school, child care after delivery is one of the most serious problems Miss Wolf says. The consultant adds that a majori■ ty of those students identified ■ as pregnant keep their babies. The consultants see several I advantages in having pregnant pupils served in their I own school districts. Transportation is noi as ■ much of a problem as it was I when the girls were meeting I in the WYMP sessions at I i First Presbyterian Church in I Ypsilanti, according to Mrs. I ■ VanOrman. The presence of pregnant I pupils in the school situation I makes the school more aware I ■ of t h e i r responsibility to young mothers, she adds. "It may put more pressure for schools to give information on contraceptives," Miss Wolf says. "It forces the issue to be considered. "These are not necessanly l problem children. From the ages of 11 and 12 on, anybody can become pregnant. The ■ realistic way to deal with this is birth control and counseling," she says. While the new aner-scnuui i ■ program is designed for pregnant girls, Miss Wolf says ït could be expanded to young I men and women, not just H pregnant teens. I The after-school sessions I are open to girls who have I dropped out of school but are ■ pregnant, Mrs. Van Orman I adds.