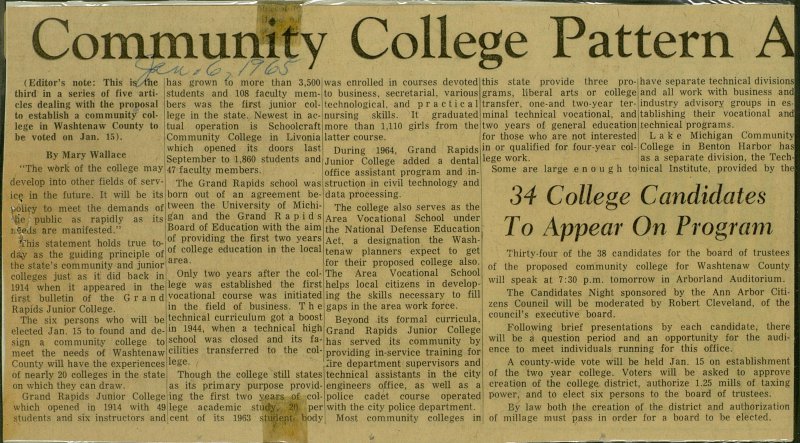 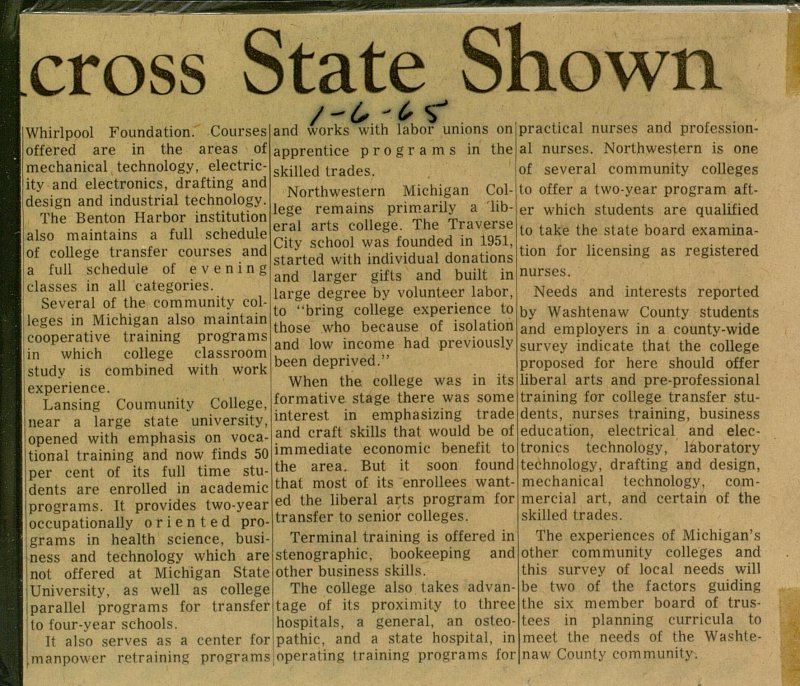 (Editor's note: This is ttie third in a series of five articles dealing with the proposal to establish a community college in Washtenaw County to be voted on Jan. 15). By Mary Wallace "The wörk of the college may develop into other fields of service in the future. It will be its poliey to meet the demands of 'lie public as rapidly as its i SeJs are manifested." "ïhis statement holds true today as the guiding principie of the state's community and junior colleges just as it did back in 1914 when it appeared in the tirst bulletin of the Grand Rapids Junior College. The six persons who will be clected Jan. 15 to found and design a community college to meet the needs of Washtenaw County will have the experiences of nearly 20 colleges in the state on which they can draw. Grand Rapids Junior College which opened in 1914 with 49 lüiUnts and six instructors and has grown ia more than 3,500 students and 108 faculty members was the first junior college in the state. Newest in actual operation is Schoolcraft Community College in Livonia which opened its doors last September to 1,860 students and 47 faculty members. The Grand Rapids school was born out of an agreement between the University of Michigan and the Grand Rapids Board of Education with the aim of providing the first two years of college education in the local !area. j Only two years after the college was established the first vocational course was initiated in the field of business. The technical curriculum got a boost in 1944, when a technical high school was closed and its facilities transferred to the college. Though the college still states las its primary purpose providing the first two years of colillege academie stuth . y per [;cent of its 1963 stuüenl bod was enrolled in courses devoted to business, secretarial, various technological. and practical nursing skills. It graduated more than 1,110 girls from the latter course. During 1964, Grand Rapids Junior College added a dental office assistant program and instructipn in civil technology and data processing. The college also serves as the Area Vocational School under the National Defense Education Act, a designation the Washtenaw planners expect to get for their proposed college also. The Area Vocational School helps local citizens in developing the skills necessary to fill gaps in the area work force. Beyond its formal curricula, Grand Rapids Junior College has served its community by providing in-service training for lire department supervisors and technical assistants in the city engineers office, as well as a pólice cadet course operated with the city pólice department. Most community colleges in :his state provide three pro-il rams, liberal arts or eollege; xansfer, one-and two-year i minal technical vocational, and I two years of general education I Eor those who are not interested in or qualified for four-year col-ji iege work. Some are large e n o u g h to'i ïave separate technical divisions ind all work with business and ndustry advisory groups in es;ablishing their vocational and echnical programs. L a k e Michigan Community kollege in Benton Harbor has ís a separate división, the Techlical Institute, provided by the Whirlpool Foundation. Courses offered are in the áreas of j mechanical technology, , ity and electronics, drafting and ' design and industrial technology. The Benton Harbor institution also maintains a full schedule J of college transfer courses and La full schedule of evening' classes in all categories. Several of the community colileges in Michigan also maintain cooperative training programs in which college classroom study is combined with work experience. Lansing Coumunity College, Inear a large state university, ■ opened with emphasis on vocaStional training and now finds 50 i per cent of its full time stuIdents are enrolled in academie programs. It provides two-year occupationally oriented programs in health science, busijness and technology which are not offered at Michigan State University, as well as college parallel programs for transfer to four-year schools. It also serves as a center for manpower retraining programs; and works with labor unions on apprentice programs in the skilied trades. Northwestern Michigan College remains primarily a liberal arts college. The Traverse City school was founded in 1951, started with individual donations and larger gifts and built in large degree by volunteer labor, to "bring college experience to those who because of isolation and low income had previously been deprived." When the college was in its formative stage there was some interest in emphasizing trade and craft skills that would be of immediate economie benefit to the area. But it soon found that most of its enrollees wanted the liberal arts program for transfer to senior colleges. Terminal training is offered in stenographic, bookeeping and other business skills. The college also takes advantage of its proximity to three hospitals, a general, an osteoIpathic, and a state hospital, in operatïng, training programs for practical nurses and professional nurses. Northwestern is one of several community colleges to offer a two-year program after which students are qualified to take the state board examination for licensing as registered nurses. Needs and interests reported by Washtenaw County students and employers in a county-wide survey indícate that the college proposed for here should offer liberal arts and pre-professional training for college transfer students, nurses training, business education, electrical and electronics technology, laboratory technology, drafting and design, mechanical technology, commercial art, and certain of the skilled trades. The experiences of Michigan's other community colleges and this survey of local needs will be two of the factors guiding the six member board of trustees in planning curricula to meet the needs of the Washtenaw County communily.

Thirty-four of the 38 candidates tor the board of trustees of the proposed community college for Washtenaw County vvill speak at 7:30 p.m. tomorrow in Arborland Auditorium. The Candidates Night sponsored by the Ann Arbor Citizens Council will be moderated by Robert Cleveland, of the council's executive board. Following brief presentations by each candidate, there will be a question period and an opportunity for the audience to meet individuals running for this office. A county-wide vote will be held Jan. 15 on establishment of the two year college. Voters will be asked to approve creation of the college, district, authorize 1.25 milis of taxing power, and to elect six persons to the board of trustees. By law both the creation of the district and authorization of millage must pass in order for a board to be elected.