Washtenaw Widening Slated In Time For 'U' Fete 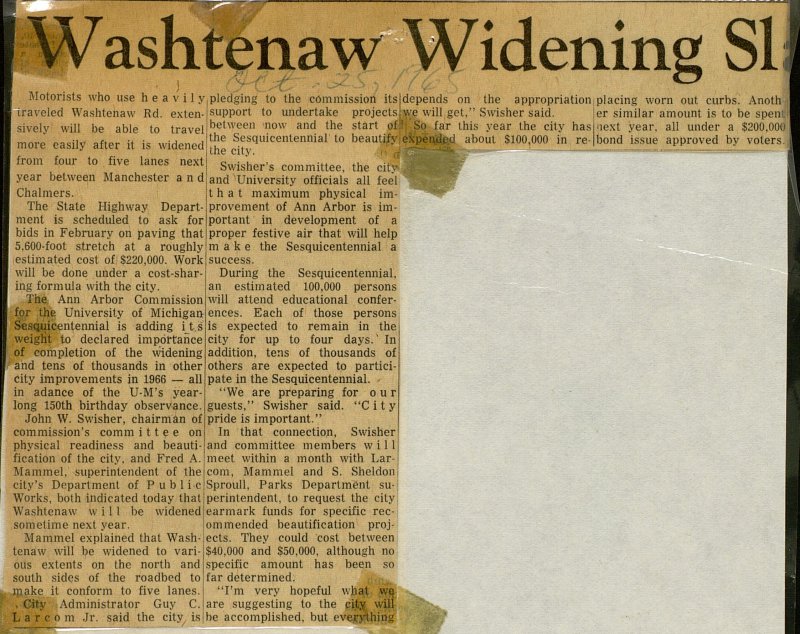 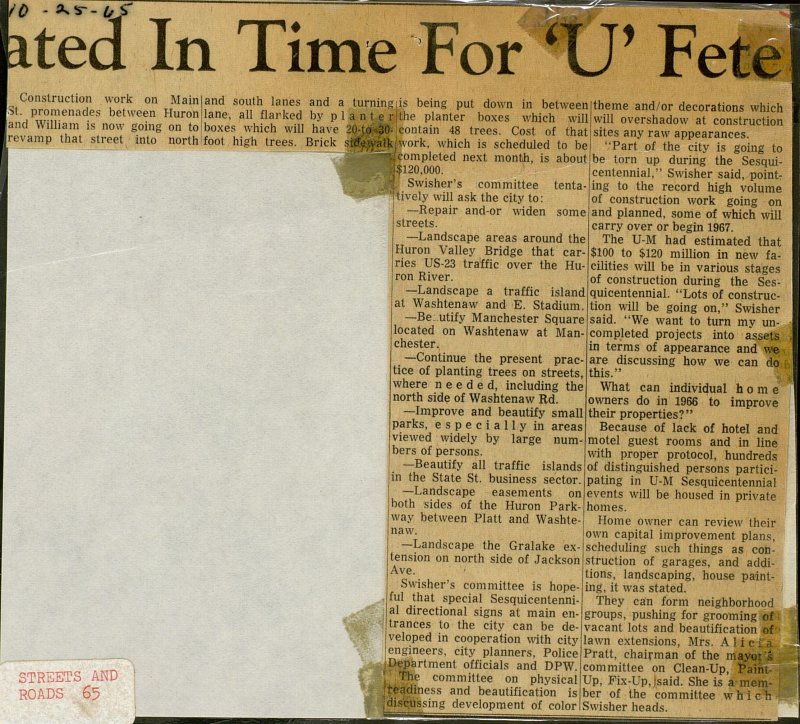 Motorists who use heavily I iraveled Washtenaw Rd. extensively will be able to travel more casily after il is widened I from four to five lanes next I year betvveen Manchester and I Chalmers. The State Highway Department is scheduled to ask for bids in February on paving that 5.600-foot stretch at a roughly estimated cost of $220,000. Work will be done under a cost-sharing formula with the city. The Ann Arbor Commission -the University of Michigan: Sesquicentennial is adding i t.s t to declared importaiice completion of the widening and tens of thousands in other city improvements in 1966 - all in adance of the U-M's yearlong 150th birthday observance. John W. Swisher, chairman of commission's comm i 1 1 e e on physical readiness and beautification of the city, and Fred A. Mammei, superintendent of the city's Department of Public Works, both indicated today that Washtenaw will be widened sometime next year. Mammei explained that Washtenaw will be widened to various extents on the north and south sides of the roadbed to ipake it conform to five lanes. . City Administrator Guy C. L a r c o m Jr. said the city is pledging to the commission its support to undertake projects betvyeen now and the start of the Sesquicentennial lo beautify Ihe city. Swisher's committee, the city and University officials all feel t h a t maximum physical improvement of Ann Arbor is importaut in development of a proper festive air that will help make the Sesquicentennial a success. During the Sesquicentennial, an estimated 100,000 persons will attend educational conferences. Each of those persons is expected to remain in the city for up to four days.' In addition, tens of thousands of others are expected to particípate in the Sesquicentennial. "We are preparing for o u r guests," Swisher said. "City pride is important." In that connectio.n, Swisher and committee members will meet within a month with Larcom, Mammei and S. Sheldon Sproull, Parks Department superintendent, to request the city earmark funds for specific recommended beautification projects. They could cost between $40,000 and 850,000, although no specific amount has been so far determined. "I'm very hopeful wha are suggesting to the city will be accomplished, but everything depends on the appropriation we will get," Swisher said. So iar this year the city has íJfcd about $100,000 in placing worn out curbs. Another similar amount is to be spent ïext year. all under a $200,000 1 bond issue approved by voters.
Construction work on Main St. promenades between Huron and William is now going on to revamp that street into north: and south lañes and a turning; lañe, all flarked by plant' boxes which will hai 0-to 30 foot high trees. Brick siö s being put down in betweer the planter boxes which wil] ,contain 48 trees. Cost of thal j-work, which is scheduled to be compleled next month, is abou $120,000. Swisher's committee tentatively will ask the city to: -Repair and-or widen some slreets. - Landscape areas around the Huron Valley Bridge that carries US-23 traffic over the Huron River. -Landscape a traffic island at Washtenaw and E. Stadium. - Be: utify Manchester Square located on Washtenaw at Manchester. -Continue the present practice of planting trees on streets, where needed, including the north side of Washtenaw Rd. - Improve and beautify small parks, especially in areas viewed widely by large numbers of persons. -Beautify all traffic islands in the State St. business sector. -Landscape easements on both sides of the Huron Parkway belween Platl and Washtenaw. -Landscape the Gralake extensión on north side of Jackson Ave. Swisher's committee is hopeful that special Sesquicentennial directional signs at main i trances to the city can be i veloped in cooperation vith city 1 engineers, city planners, Pólice Department officials and DPW. The committee on physical 1 fëadiness and beautification is t discussing development of color S - .- .. ' theme and or decorations which will overshadow at construction sites any ravv appearances. "Part of the city is going to be torn up during the Sesquicentennial," Swisher said, point: ing to the record high volume of construction work going on and planned, some of which will carry over or begin 1967. The U-M had estimated that $100 to $120 million in new facilities will be in various stages of construction during the Sesquicentennial. "Lots of construction will be going on," Swisher said. "We want to turn my uncompleted projects into assets in terms of appearance and we , are discussing how we can do ; this." What can individual home owners do in 1966 to improve heir properties?" Because of lack of hotel and motel guest rooms and in line vith proper protocol, hundreds of distinguished persons participating in U-M Sesquicentennial events will be housed in private homes. Home owner can review their own capital improvement plans, scheduling such things as construction of garages, and additions, landscaping, house painting, it was stated. They can form neighborhood ?roups, pushing for grooming of pacant lots and beautification of awn extensions, Mrs. Alicia Pratt, chairman of the ma: :ommitlee on Clean-Up, T Jp, Fix-Up,jsaid. She is a-mem)er of the committee w h i c h ïwisher heads.