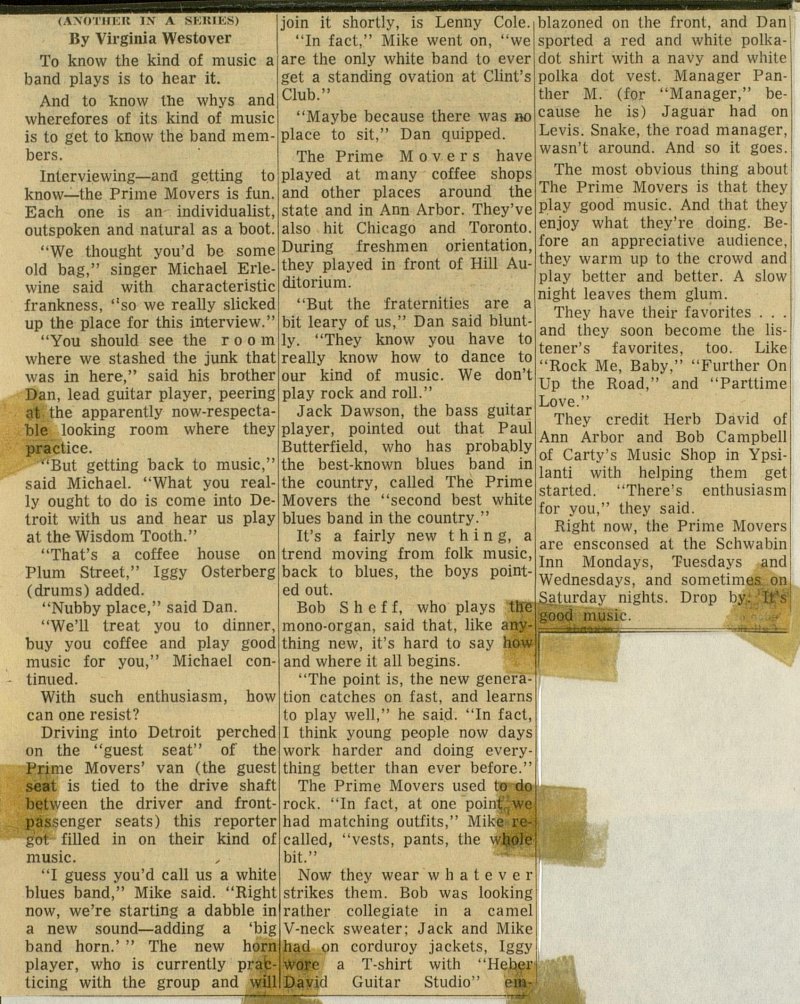 To know the kind of music a band plays is to hear it. And to know the whys and wherefores of its kind of music is to get to know the band members. Interviewing- and getting to know- the Prime Movers is fun. Each one is an individualist, outspoken and natural as a boot. "We thought you'd be some old bag," singer Michael Erlewine said with characteristic frankness, "so we really slicked up the place for this interview." "You should see the room vvhere we stashed the junk that was in here," said his brother Dan, lead guitar player, peering at the apparently now-respectable looking room where they practice. "But getting back to music," said Michael. "What you really ought to do is come into Detroit with us and hear us play at the Wisdom Tooth." "That's a coffee house on Plum Street," Iggy Osterberg (drums) added. "Nubby place," said Dan. "We'll treat you to dinner, buy you coffee and play good music for you," Michael continued. With such enthusiasm, how can one resist? Driving into Detroit perched on the "guest seat" of the Prjme Movers' van (the guest seat is tied to the drive shaft between the driver and frontpassenger seats) this reporter got filled in on their kind of music. "I guess you'd cali us a white blues band," Mike said. "Right now, we're starting a dabble in a new sound - adding a 'big band hom.' " The new hom player, who is currently practicing with the group and will join it shortly, is Lenny Cole. "In fact," Mike went on, "we are the only white band to ever get a standing ovation at Clint's Club." "Maybe because there was no place to sit," Dan quipped. The Prime Movers have played at many coffee shops and other places around the state and in Ann Arbor. They've also hit Chicago and Toronto. During freshmen orientation, they played in front of HUI Auditorium. "But the fraternities are a bit leary of us," Dan said bluntly. "They know you have to really know how to dance to our kind of music. We don't play rock and roll." Jack Dawson, the bass guitar player, pointed out that Paui Butterfield, who has probably the best-known blues band in the country, called The Prime Movers the "second best white blues band in the country." It's a fairly new t h i n g, a trend moving from folk music, back to blues, the boys pointed out. Bob S h e f f , who plays tBe mono-organ, said that, like anything new, it's hard to say how and where it all begins. "The point is, the new gcncration catches on fast, and learns to play well," he said. "In fact, I think young people now days work harder and doing everything better than ever before." The Prime Movers used te"tjflrock. "In fact, at one point we had matching outiits," Mike recallcd, "vests, pants, the vhoJe bit." Now they wear w h a t e v e r strikes them. Bob was looking rather collegiate in a camel V-neck sweater; Jack and Mike had on corduroy jackets, Iggyj worp a T-shirt with "Heber David Guitar Studio" eifc' blazoned on the front, and Dan sported a red and white polkadot shirt with a navy and white polka dot vest. Manager Panther M. (for "Manager," because he is) Jaguar had on Levis. Snake, the road manager, wasn't around. And so it goes. The most obvious thing about The Prime Movers is that they play good music. And that they enjoy what they're doing. Before an appreciative audience, they warm up to the crowd and play better and better. A slow night leaves them glum. They have their favorites . . . and they soon become the listener's favorites, too. Like "Rock Me, Baby," "Further On Up the Road," and "Parttime Love." They credit Herb David of Ann Arbor and Bob Campbell of Carty's Music Shop in Ypsilanti with helping them get started. "There's enthusiasm for you," they said. Right now, the Prime Movers are ensconsed at the Schwabin Inn Mondays, Tuesdays and Wednesdays, and sometimes on Saiurday nights, Drop by. It'.s good music.