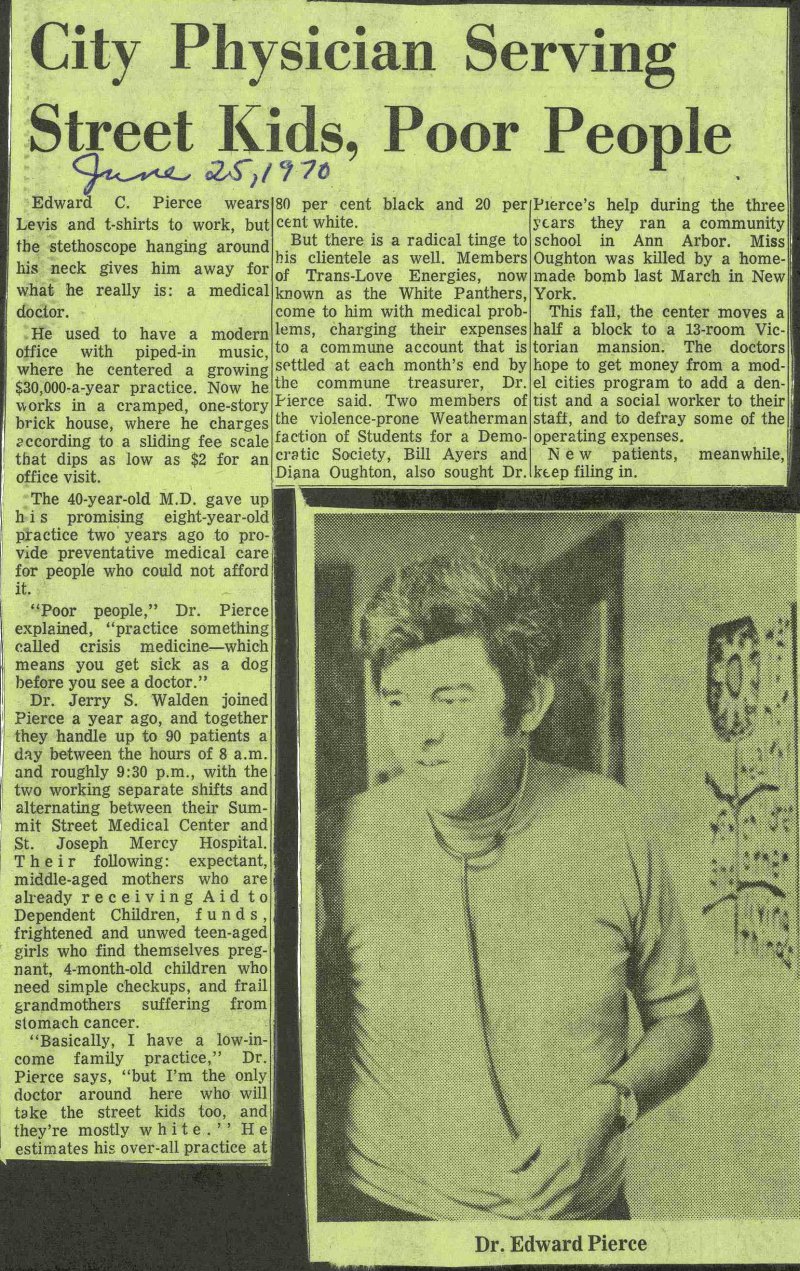 Edward C. Pierce wears Levis and t-shirts to work, but tbe stethoscope hanging around his neck gives him away for what he really is: a medical doctor. He used to have a modern office with piped-in music, where he centered a growing $30,000-a-year practice. Now he works in a cramped, one-story brick house, where he charges sccording to a sliding fee scale that dips as low as $2 for an office visit. The 40-year-old M.D. gave up his promising eight-year-old practice two years ago to provide preventative medical care for people who could not afford! it. "Poor people," Dr. Pierce explained, "practice something called crisis medicine - which means you get sick as a dog before you see a doctor." Dr. Jerry S. Walden joined Pierce a year ago, and together they handle up to 90 patients a day between the hours of 8 a.m. and roughly 9:30 p.m., with the two working separate shifts and alternating between their Summit Street Medical Center and St. Joseph Mercy Hospital. Their following: expectant, middle-aged mothers who are already receiving Aid to Dependent Children, f u n d s , frightened and unwed teen-aged girls who find themselves pregnant, 4-month-old children who need simple checkups, and frail grandmothers suffering from stomach cáncer. "Basically, I have a low-income family practice," Dr. Pierce says, "but I'm the only doctor around here who will take the street kids too, and they 're mostly white.'' He estimates his over-all practice at 80 per cent black and 20 per cent white. But there is a radical tinge to bis clientèle as well. Members of Trans-Love Energies, now known as the White Panthers, come to him with medical problems, charging their expenses to a commune account that is sottled at each month's end by the commune treasurer, Dr. Pierce said. Two members of the violence-prone Weatherman faction of Students for a Democratie Society, Bül Ayers and Diana Oughton, also sought Dr. Pierce's help during the three years they ran a community school in Ann Arbor. Miss Oughton was killed by a homemade bomb last March in New York. This f all, the center moves a half a block to a 13-room Victorian mansion. The doctors hope to get money from a model cities program to add a dentist and a social worker to their stafi, and to defray some of the operating expenses. New patients, meanwhilej ktep filing in.