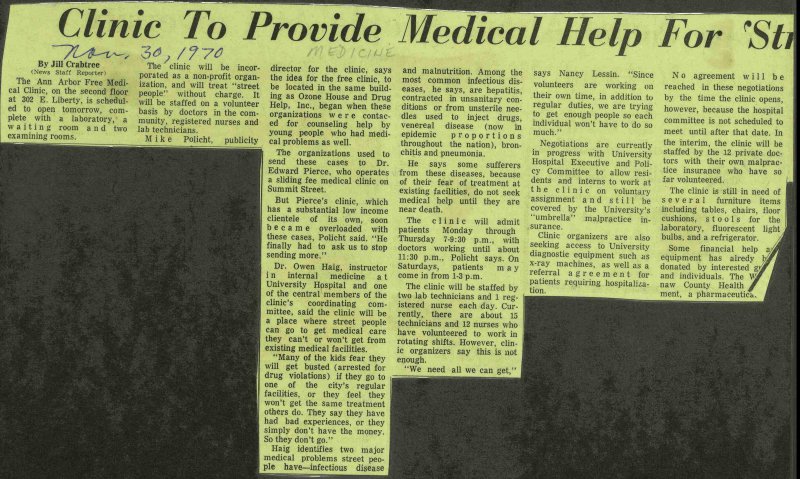 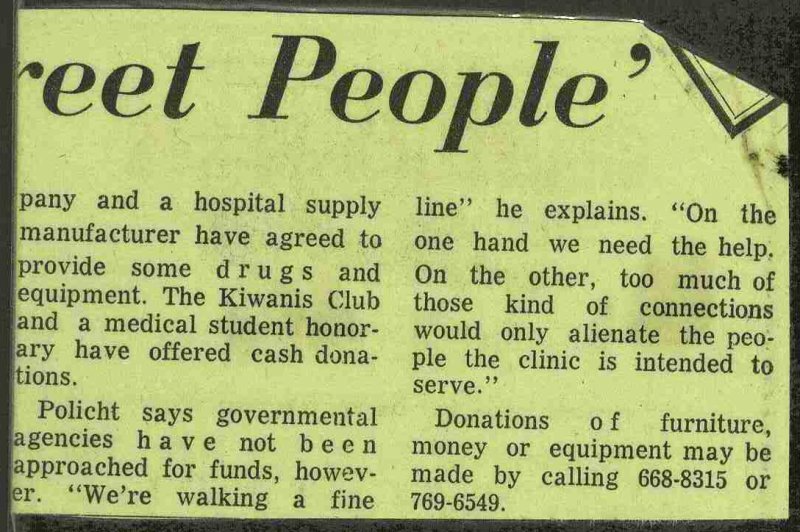 The Ann Arbor Free Medical Clinic, on the second floor at 302 E. Liberty, is scheduled to open tomorrow, complete with a laboratory, a waiting room and two examining rooms. The clinic will be incorporated as a non-profit organization, and will treat "street people" without charge. It will be staffed on a volunteer basis by doctors in the community, registered nurses and lab technicians. Mike Policht, publicity director for the clinic, says the idea for the free clinic, to be located in the same building as Ozone House and Drug Help, Inc., began when these organizations were contaced for counseling help by young people who had medical problems as well. The organizations used to send these cases to Dr. Edward Pierce, who operates a sliding fee medical clinic on Summit Street. But Pierce's clinic, which has a substantial low income clientèle of its own, soon became overloaded with these cases, Policht said. "He finally had to ask us to stop sending more." Dr. Owen Haig, instructor i n internal medicine at University Hospital and one of the central members of the clinic's coordinating committee, said the clinic will be a place where street people can go to get medical care they can't or won't get from existing medical facilities. "Many of the kids fear they will get busted (arrested for drug violations) if they go to one of the city's regular facilities, or they feel they won't get the same treatment others do. They say they have had bad experiences, or they simply don't have the money. So they don't go." Haig identifies two major medical problems street I pie have- infectious disease I and malnutrition. Among the most common infectious diseases, he says, are hepatitis, contracted in unsanitary conditions or f rom unsterile needies used to inject drugs, venereal disease (now in epidemie proportions throughout the nation), bronchitis and pneumonia. He says some sufferers from these diseases, because of their fear of treatment at existing facilities, do not seek medical help until they are near death. The c 1 i n i c will admit patients Monday through Thursday 7-9:30 p.m., with doctors working until about 11:30 p.m., Policht says. On Saturdays, patients m a y come in from 1-3 p.m. The clinic will be staffed by two lab technicians and 1 registered nurse each day. Currently, there are about 15 technicians and 12 nurses who have volunteered to work in rotating shifts. However, ie organizers say this is not I enough. "We need all we can get," I ==5 1 says Nancy Lessin. "Since volunteers are working on their own time, in addition to regular duties, we are trying to get enough people so each individual won't have to do so much." Negotiations are currently in progress with University Hospital Executive and Policy Committee to allow residents and interns to work at the c 1 i n i e on voluntary assignment and s t i 1 1 be covered by the University's "umbrella" malpractice insuranee. Clinic organizers are also seeking access to University diagnostie equipment such as x-ray machines, as well as a ref erral a g r e e m e n t for patients requiring hospitalization. _ N o agreement w i 1 1 be reached in these negotiations by the time the clinic opens, however, because the hospital committee is not scheduled to meet until after that date. In the interim, the clinic will be staffed by the 12 private doctors with their own malpractice insurance who have so far volunteered. The clinic is still in need of s e v e r a I furniture items including tables, chairs, iloor cushions, s t o o 1 s for the laboratory, fluorescent lightjj bulbs, and a refrigera tor. k Some financial help afl equipment has alredy wfm donated by interested %ygk and individuals. The V?L M naw County Health f M ment, a pharmaceutiea. Mm pany and a hospital supply manufacturer have agreed to provide some drugs and equipment. The Kiwanis Club and a medical student honorary have offered cash dona:ions. Policht says governmental agencies have not been approached for funds, howevïr. "We're walking a fine line" he explains. "On the one hand we need the help. On the other, too much of those kind of connections would only alienate the people the clinic is intended to serve." Donations of furniture, money or equipment may be made by calling 668-8315 or 769-6549.