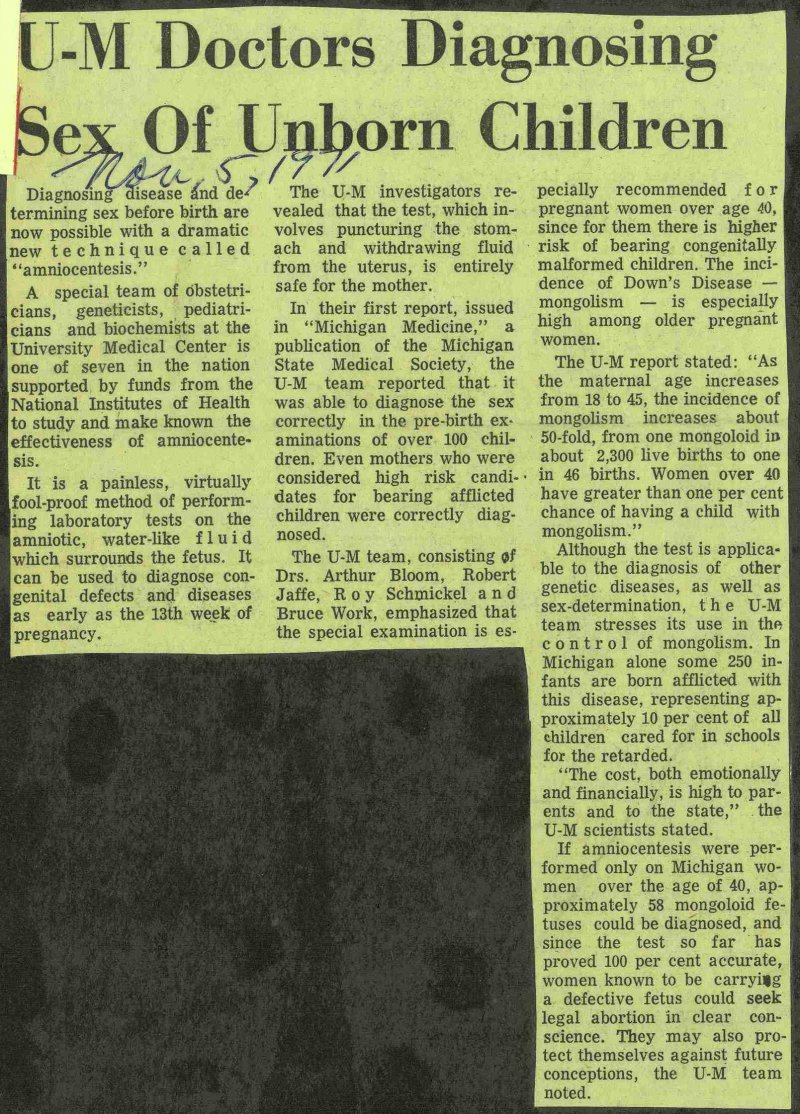 Diagnosing Sisease ánd de- termining sex before birth are now possible with a dramatic new technique called "amniocentesis." A special team of óbstetricians, geneticists, pediatricians and biochemists at the University Medical Center is one of seven in the naüon supported by funds from the National Institutes of Health to study and make known the effectiveness of amniocentesis. It is a painless, virtually fool-proof method of performing laboratory tests on the amniotic, water-like fluid which surrounds the fetus. It can be used to diagnose congenital defects and diseases as early as the 13th week of pregnancy. The U-M investigators revealed that the test, whieh involves puncturing the stomach and withdrawing fluid f rom the uterus, is entirely safe for the mother. In their first report, issued in "Michigan Medicine," a publication of the Michigan State Medical Society, the U-M team reported that it was able to diagnose the sex correctly in the pre-birth examinations of over 100 children. Even mothers who were considered high risk dates for bearing afflicted children were correctly diagnosed. The U-M team, consisting ƒ Drs. Arthur Bloom, Robert Jaffe, Roy Schmickel and Bruce Work, emphasized that the special examination is pecially recommended for pregnant women over age 40, since for them there is higher risk of bearing congenitally malformed children. The incidence of Down's Disease - mongolism - is especially high among older pregnant women. The U-M report stated: "As the maternal age Lacreases f rom 18 to 45, the incidence of mongolism increases about 50-fold, from one mongoloid in about 2,300 live births to one in 46 births. Women over 40 have greater than one per cent chance of having a child with mongolism." Although the test is applicable to the diagnosis of other genetic diseases, as well as sex-determination, the U-M team stresses its use in the control of mongolism. In Michigan alone some 250 infants are bom afflicted with this disease, representing approximately 10 per cent of all children cared for in schools for the retardèd. "The cost, both emotionally and financially, is high to parents and to the state," the U-M scientists stated. If amniocentesis were performed only on Michigan women over the age of 40, approximately 58 mongoloid fetuses could be diagnosed, and since the test so f ar has proved 100 per cent accurate, vromen known to be carryi(g a defective fetus could seek legal abortion in clear conscience. They may also protect themselves against future conceptions, the U-M team noted.