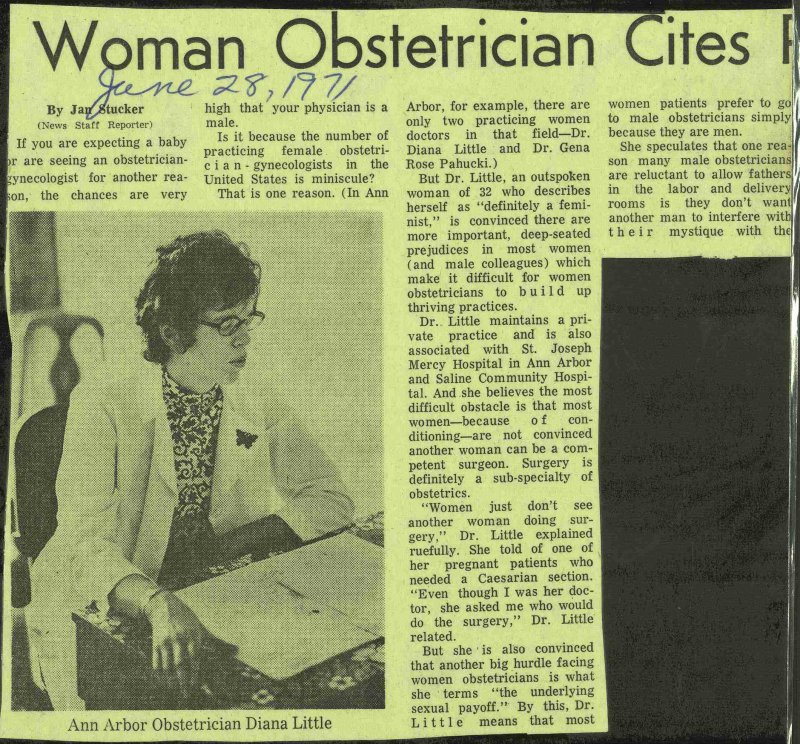 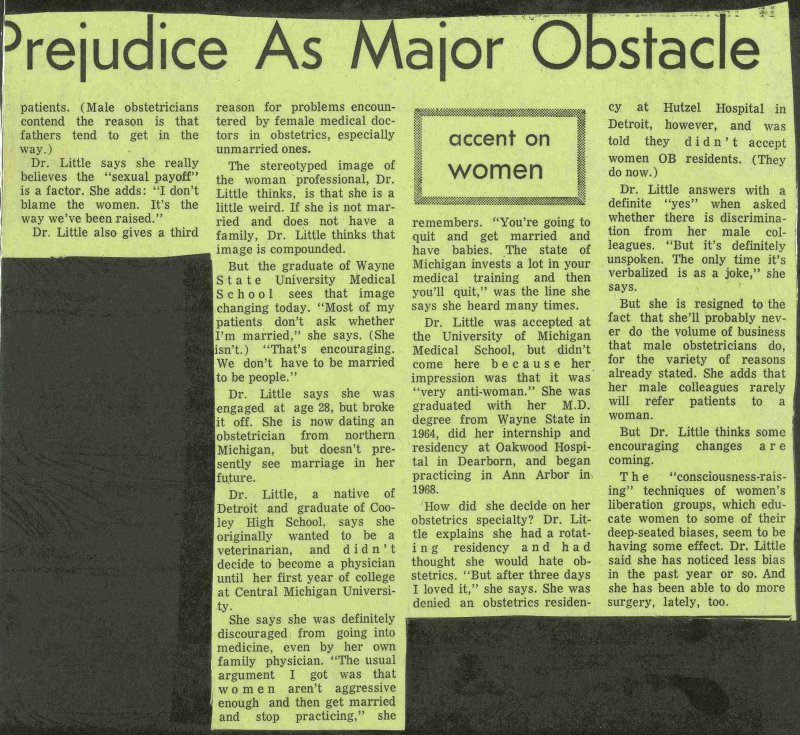 If you are expecting a baby r are seeing an obstetricianjynecologist for another reaion, the chances are very high that your physician is a male. Is it because the number of practicing female obstetric i a n - gynecologists in the United States is miniscule? That is one reason. (In Arm Arbor, for example, there are only two practicing women doctors in that field- Dr. Diana Little and Dr. Gena Rose Pahucki.) But Dr. Little, an outspoken woman of 32 who describes herself as "definitely a feminist," is convinced there are more important, deep-seated prejudices in most women (and male colleagues) which make it difficult for women obstetricians to b u i 1 d up thriving practices. Dr. Little maintains a private practice and is also I associated with St. Joseph Mercy Hospital in Ann Arbor and Saline Community Hospital. And she believes the most difficult obstacle is that most women- because o f conditioning- are not convinced another woman can be a I petent surgeon. Surgery is definitely a sub-specialty of obstetrics. "Women just don't see another woman doing surgery," Dr. Little explained ruefully. She told of one of her pregnant patients who needed a Caesarian section. "Even though I was her doctor, she asked me who would do the surgery," Dr. Little related. But she ■ is also convinced that another big hurdle facing women obstetricians is what she terms "the underlying sexual payoff." By this, Dr. Little means that most women patients prefer to go to male obstetricians simply because they are men. She speculates that one rea- son many male obstetriciansi are reluctant to allow fathers in the labor and delivery rooms is they don't want another man to interfere with t h e i r mystique with the patients. (Male obstetricians contend the reason is that fathers tend to get in the way.) Dr. Little says she really believes the "sexual payoff" is a factor. She adds: "I don't blame the women. It's the way we've beenraised." Dr. Little also gives a third reason for problems encountered by female medical doctors in obstetrics, especially unmarried ones. The stereotyped image of the woman professional, Dr. Little thinks, is that she is a little weird. If she is not married and does not have a family, Dr. Little thinks that image is compounded. But the gradúate of Wayne State University Medical School sees that image changing today. "Most of my patients don't ask whether I'm married," she says. (She isn't.) "That's encouraging. We don't have to be married to be people." Dr. Little says she was engaged at age 28, but broke it off. She is now dating an obstetrician from northern Michigan, but doesn't presently see marriage in her fu.ture. Dr. Little, a native of Detroit and gradúate of Cooley High School, says she originally wanted to be a veterinarian, and d i d n ' t decide to become a physician until her first year of college at Central Michigan University. She says she was definitely discouraged from going into medicine, even by her own family physician. "The usual argument I got was that w o m e n aren't aggressive enough and then get married and stop practicing," she remembers. "You're going to quit and get married and have babies. The state of Michigan invests a lot in your medical training and then you'll quit," was the line she says she heard many times. Dr. Litüe was accepted at the University of Michigan Medical School, but didn't come here b e c a u s e her impression was that it was "very anti-woman." She was graduated with her M.D. degree from Wayne State in 1964, did her internship and residency at Oakwood Hospital in Dearborn, and began practicing in Ann Arbor in1968. How did she decide on her obstetrics specialty? Dr. Little explains she had a rotati n g residency and had thought she would hate obstetrics. "But after three days I loved it," she says. She was denied an obstetrics cy at Hutzel Hospital in Detroit, however, and was told they d i d n ' t accept women OB residents. (They do now.) Dr. Little answers with a definite "yes" when asked whether there is discrimination from her male colleagues. "But it's definitely unspoken. The only time it's verbalized is as a joke," she says. But she is resigned to the fact that she'll probably never do the volume of business that male obstetricians do, for the variety of reasons already stated. She adds that her male colleagues rarely will refer patients to a woman. But Dr. Little thinks some encouraging changes are coming. The "consciousness-raising" techniques of women's liberation groups, which edúcate women to some of their deep-seated biases, seem to be having some effect. Dr. Little said she has noticed less bias in the past year or so. And she has been able to do more surgery, lately, too. wmmmmmmmmmmmmm accent on women