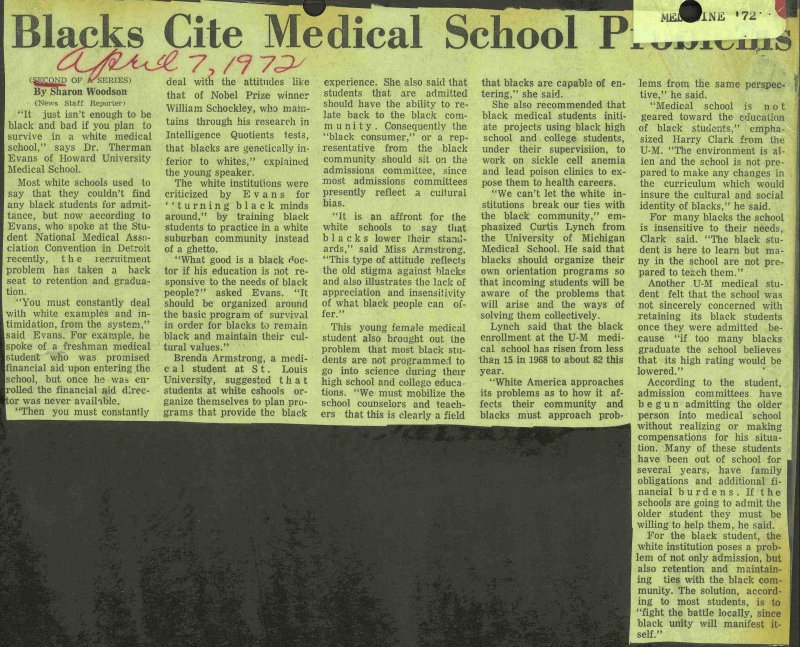 "It just isn't enough to be black and bad if you plan to survive in a white medical school," says Dr. Therman Evans of Howard University Medical School. Most white schools used to say that they couldn't find any black students for admittance, but now according to Evans, who spoke at the Student National Medical Association Convention in Detroit recently, the recruitment problem has taken a back seat to retention and graduation. "You must constantly deal with white examples and intimidation, from the system," said Evans. For example, he spoke of a freshman medical student wfiö was promised financial aid upon entering the school, but once he wa enrolled the financial 8(id director was never availible."Then you must constantly deal with the attitudes lite that of Nobel Prize winner William Schockley, wlio maintains through his research in Intelligence Quotients tests, that blacks are genetically inferior to whites," explained the young speaker. The white institutions were criticized by Evans for "turning black minds around," by training black students to practice in a white suburban community instead of a ghetto. "What good is a black doctor if his education is not responsive to the needs of black people?" asked Evans. "It should be organized around the basic program of survival in order for blacks to reiiiain black and maintain their cultural values." Brenda Armstrong, a mndic a 1 student at S t . Louis University, suggested that students at white cshools organize themselves to plan programs that provide the black experience. She also said that students that are admitted should have the ability to relate back to the black community. Consequently the "black consumer," or a representative from the black community should sit on the admissions committee, since most admissions committees presently reflect a cultural bias. "It is an affront for the white schools to say that b 1 a c k s lower fheir standards," said Miss Armstrong. "This type of attitude reflects the old stigma against blacks and also illustrates the lacfc of appreciation and insensiüvity of what black people can offer." This young female medical student also brought out the problem that most black students are not programmed to go into science during their high school and college educations. "We must mobilize the school counselors and teachers that this is clearly a field that blacks are capable of entering," she said. She also recommended that black medical students initiate projects using black high school and college students, under their supervisiion, to work on sickle ceE anemia and lead poison clinics to expose them to health careers. "We can't let the white institutions break our ties with the black community," emphasized Curtis Lynch from the University of Michigan Medical School. He said that blacks should organize their own orientation programs so that incoming students will be aware of the problems that will arise and the ways of solving them collectively. Lynch said that the black enrollment at the U-M medical school has risen from less than 15 in 1968 to about 82 this year. "White America approaches its problems as to how it affects their community and blacks must approach lems from. the same perspective," he said. "Medical school is n o t geared toward the educatkra of black stüdents," emphasizeij Harry Clark from the U-M. "The environment is alien and the school is not prepared to make any changes in the curriculum which would insure the cultural and social identity of blacks," he said. For many blacks the school is insensitive to their nèeds, Clark said. "The black studenlj is here to learn but many in the school are not prepared to tesch them." Another U-M medical student feit that the school was not sincerely concerned with retaining its black stüdents once they were admitted because "if too many blacks gradúate the school believes that its high rating would be lowered." According to the student, admission committees have b e g u n admitting the older person into medical school without realizing or making compensations for his situation. Many of these stüdents have been out of school for several years, have family obligations and additional financial burdens. If the schools are going to admit the older student they must be willing to help them, he said. For the black student, the white institution poses a problem of not only admission, but also retention and maintaining ties with the black community. The solution, according to most stüdents, is to "fight the battle locally, since black unity will manifest itself."