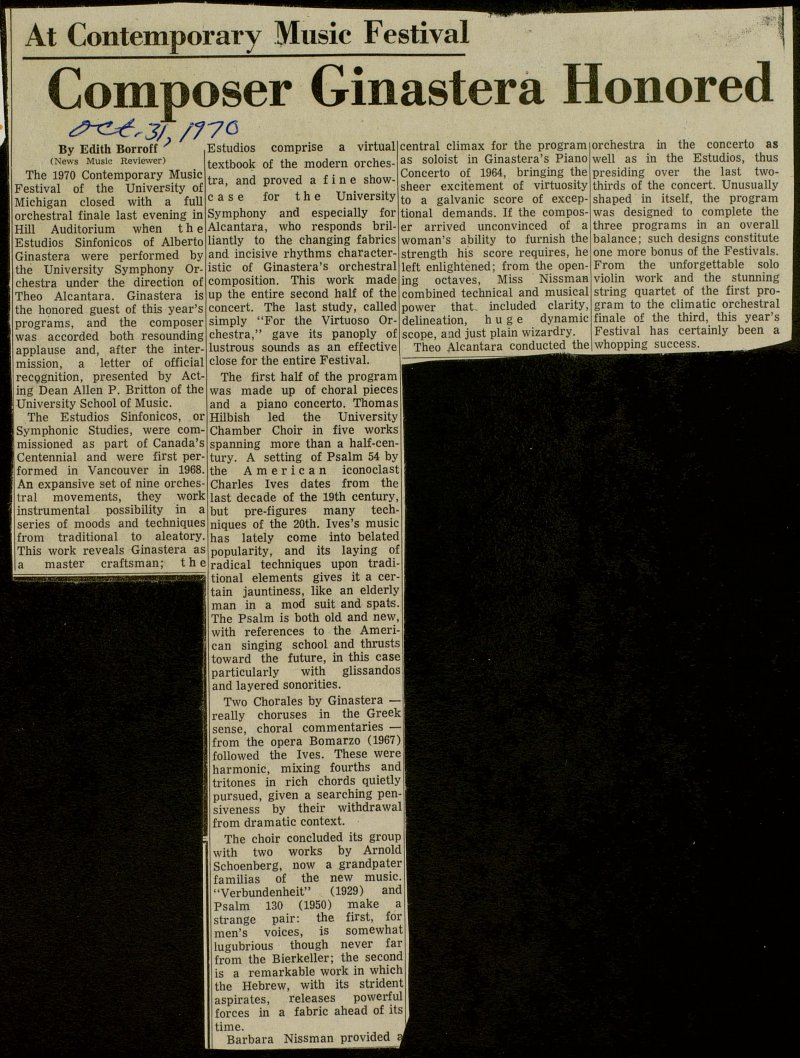 The 1970 Contemporary Music Festival of the University of Michigan closed with a full orchestral finale last evening in Hill Auditorium when the Estudios Sinfónicos of Alberto Ginastera were performed by the University Symphony Orchestra under the direction of Theo Alcántara. Ginastera is the honored guest of this year's programs, and the composer was accorded both resounding applause and, after the intermission, a letter of official recpgnition, presented by Acting Dean Allen P. Britton of the University School of Music. The Estudios Sinfónicos, or Symphonic Studies, were commissioned as part of Canada's Centennial and were first performed in Vancouver in 1968. An expansive set of nine orchestral movements, they work instrumental possibility in a series of moods and techniques f rom traditional to aleatory. This work reveáis Ginastera as Ja master craftsman; the yo Estudios comprise a virtual textbook of the modern orchestra, and proved afine showc a s e for the University Symphony and especially for Alcántara, who responds brilliantly to the changing fabrics and incisive rhythms characteristic of Ginastera's orchestral composition. This work made up the entire second half of the concert. The last study, called simply "For the Virtuoso Orchestra," gave its panoply of lustrous sounds as an effective close for the entire Festival. The first half of the program was made up of choral pieces and a piano concerto. Thomas Hilbish led the University Chamber Choir in five works spanning more than a half-century. A setting of Psalm 54 by the American iconoclast Charles Ives dates from the last decade of the 19th century, but pre-figures many techniques of the 20th. Ives's music has lately come into belatedl popularity, and its laying of radical techniques upon traditional elements gives it a certain jauntiness, like an elderly man in a mod suit and spats. The Psalm is both old and new, with references to the American singing school and thrusts toward the future, in this case particularly with glissandos and layered sonorities. Two Chórales by Ginastera - really choruses in the Greek sense, choral commentaries - from the opera Bomarzo (1967) followed the Ives. These were harmonie, mixing fourths and tritones in rich chords quietly pursued, given a searching pensiveness by their withdrawal from dramatic context. The choir concluded its group with two works by Arnold Schoenberg, now a grandpater familias of the new music. "Verbundenheit" (1929) and Psalm 130 (1950) make a strange pair: the first, for men's voices, is somewhat lugubrious though never far from the Bierkeller; the second is a remarkable work in which the Hebrew, with its strident aspirates, releases powerful forces in a fabric ahead of its time. Barbara Nissman provided a central climax for the program as soloist in Ginastera's Piano Concerto of 1964, bringing the sheer excitement of virtuosity to a galvanic score of exceptional demands. If the composer arrived unconvinced of a woman's ability to furnish the strength his score requires, he left enlightened; f rom the opening octaves, Miss Nissman combined technical and musical power that. included clarity, delineation, h u g e dynamic scope, and just plain wizardry. Theo Alcántara conducted the orchestra in the concerto as well as in the Estudios, thus presiding over the last twothirds of the concert. Unusually shaped in itself, the program was designed to complete the three programs in an overall balance; such designs constitute one more bonus of the Festivals. From the unforgettable solo violin work and the stunning string quartet of the first program to the climatic orchestral finale of the third, this year's Festival has certainly been a whopping success.