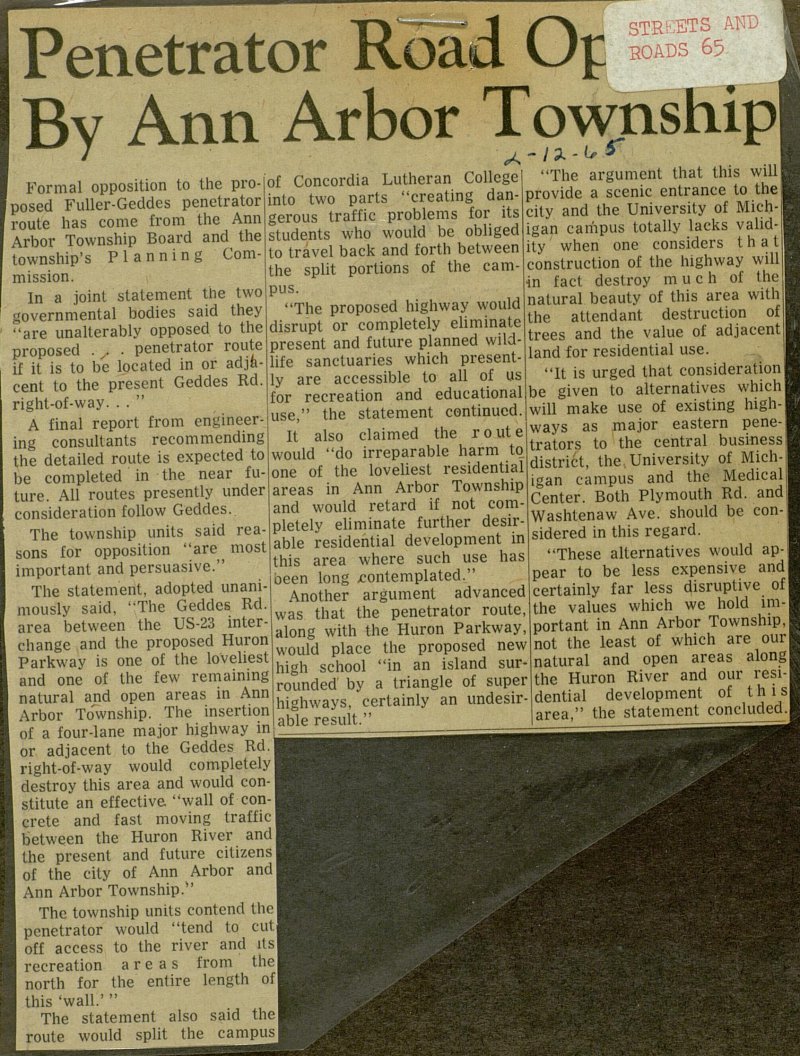 Formal opposition to the proposed Fuller-Geddes penetrator route has come from the Ann Arbor Township Board and the lownship's Planning Commission. ín a joint statement the two governniental bodies said they "are unalterably opposed to the proposed .v . penetrator route if it is to be located in or adjacent to the present Geddes Rd. right-of-way. . . " A final report f rom engineering consultants recommcnding the detailed route is expected to be completed in the near future. All routes presently under consideration follow Geddes. The tovvnship units said reasons for opposition "are most important and persuasive." The statement, adopted unanimously said, "The Geddes Rd. area between the US-23 interchange and the proposed Huron Parkway is one of the loveliest and one of the few remaining natural and open areas in Ann Arbor To'wnship. The insertion of a four-lane major higlvway in or adjacent to the Geddes Rd. right-of-way would completely destroy this area and would constitute an effective "wall of concrete and fast moving traffic between the Huron River and the present and future cilizens of the city of Ann Arbor and Ann Arbor Township." The township units contend the penetrator would "tend to cut off access to the river and lts recreation areas f rom the north for the entire length of this 'wall.' " The statement also said the route would split the campus of Concordia Lutheran College into two parts "creating dangerous traffic problems for its students who would be obliged to travel back and forth between the split portions of the campus. "The proposed highway would disrupt or completely elimínate present and future planned wildlife sanctuaries which presently are accessible to all of us for recreation and educational use," the statement continued. It also claimed the route would "do irreparable harm te one of the loveliest residentia! areas in Ann Arbor Township and would retard if not completely elimínate further desirable residential development in this área where such use has oeen long jcontemplated." Another argument advanced was that the penetrator route, along with the Huron Parkway, would place the proposed new high school "in an island surrounded by a triangle of super highways, certainly an undesirable result." "The argument that this willl rovide a scenic entrance to thel ity and the University of Mich-I gan campus totally lacks valid-I ■y'when one considers thatl onstruction of the highway will n f act destroy much of the natural beauty of this area with he attendant destruction of rees and the value of adjacent and for residential use. "It is urged that consideration be given to alternatives which will make use of existing highways as major eastern penetrators to the central business] district, the. University of Michigan campus and the Medical Center. Both Plymouth Rd. and Washtenaw Ave. should be considered in this regard. "These alternatives would pear to be less expensive ana certainly far less disruptive of the values which we hold important in Ann Arbor Township, not the least of which are our natural and open areas along the Huron River and our residential development of this area," the statement concluded..