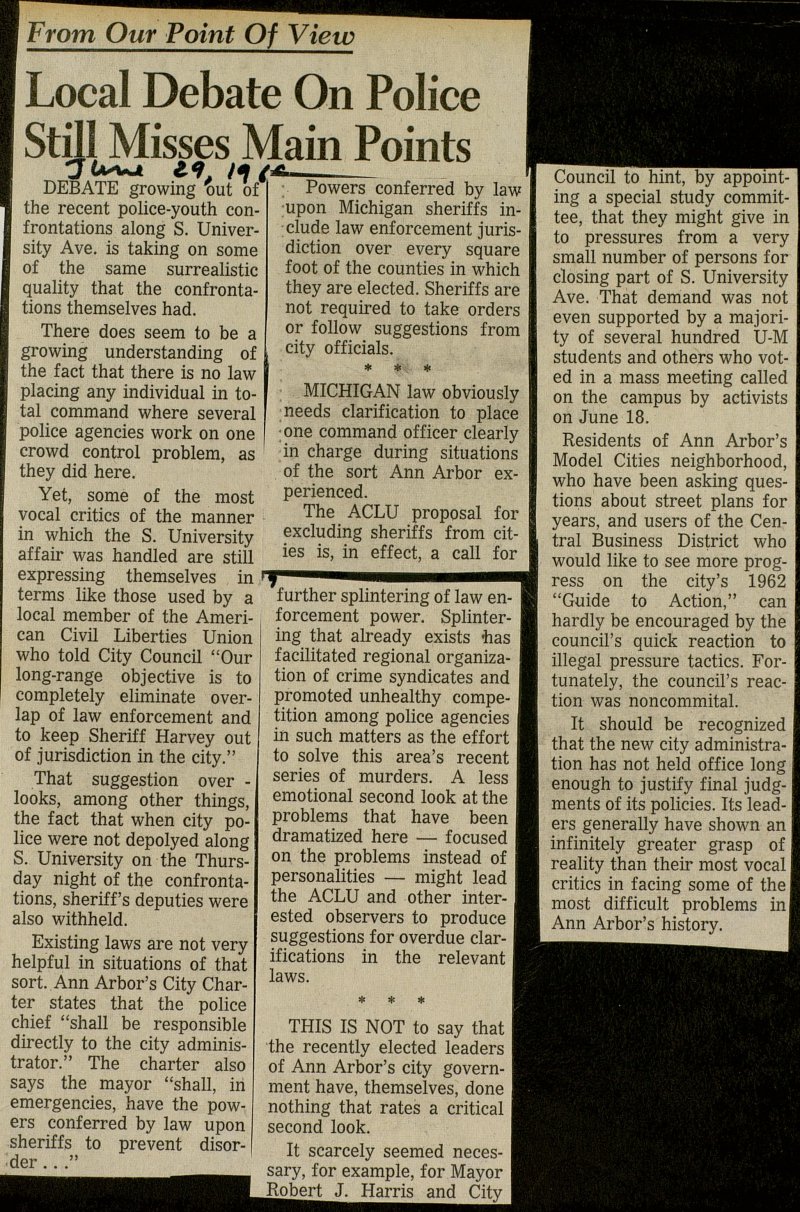 DEBATE growing fiut óf the recent police-youth confrontations along S. University Ave. is taking on some of the same surrealistic quality that the confrontations themselves had. There does seem to be a growing understanding of the fact that there is no law placing any individual in total command where several pólice agencies work on one crowd control problem, as they did here. Yet, some of the most vocal critics of the manner in which the S. University affair was handled are still expressing themselves in terms like those used by a local member of the American Civil Liberties Union who told City Council "Our long-range objective is to completely elimínate overlap of law enforcement and to keep Sheriff Harvey out of jurisdiction in the city." That suggestion over - looks, among other things, the fact that when city police were not depolyed along S. University on the Thursday night of the confrontations, sheriff 's deputies were also withheld. Existing laws are not very helpful in situations of that sort. Ann Arbor's City Charter states that the pólice chief "shall be responsible directly to the city administrator." The charter also says the mayor "shall, in emergencies, have the powers conferred by law upon sheriffs to prevent disorder ___ Powers conferred by law upon Michigan sheriffs include law enforcement jurisdiction over every square foot of the counties in which they are elected. Sheriffs are not required to take orders or follow suggestions from city officials. ♦ MICHIGAN law obviously needs clarification to place one command officer clearly in charge during situations of the sort Ann Arbor experienced. The ACLU proposal for excluding sheriffs from cities is, in effect, a cali for f urther splintering of law enforcement power. Splintering that already exists -has facilitated regional organization of crime syndicates and promoted unhealthy competition among pólice agencies in such matters as the effort to solve this area's recent series of murders. A less emotional second look at the problems that have been dramatized here - focused on the problems instead of personalities - might lead the ACLU and other interested observers to produce suggestions for overdue clarifications in the relevant laws. THIS IS NOT to say that the recently elected leaders of Ann Arbor's city government have, themselves, done nothing that rates a critical second look. It scarcely seemed necessary, for example, for Mayor JRobert J. Harris and City Council to hint, by appointing a special study committee, that they might give in to pressures from a very small number of persons for closing part of S. University Ave. That demand was not even supported by a majority of several hundred U-M students and others who voted in a mass meeting called on the campus by activists on June 18. Residents of Ann Arbor's Model Cities neighborhood, who have been asking questions about street plans for years, and users of the Central Business District who would like to see more progress on the city's 1962 "Guide to Action," can hardly be encouraged by the councü's quick reaction to illegal pressure tactics. Fortunately, the council's reaction was noncommital. It should be recognized that the new city administration has not held office long enough to justify final judgments of its policies. lts leaders generally have shown an infinitely greater grasp of reality than their most vocal I critics in f acing some of the most difficult problems in Ann Arbor's history.