Briefs Called For In Tax Case 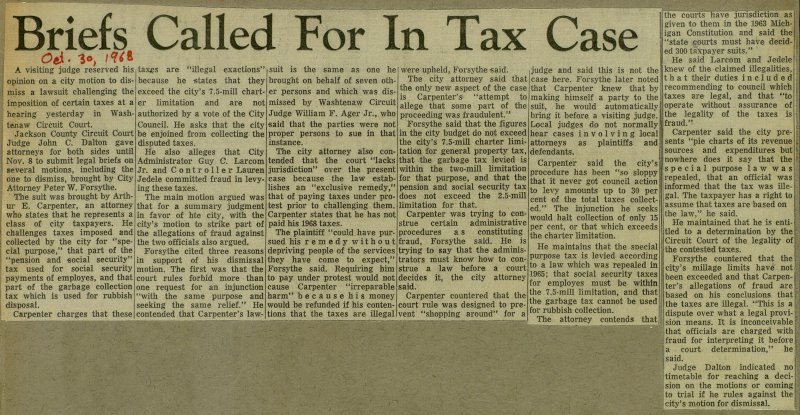 A visiting judge reserved his opinión on a city motion to dismiss a lawsuit challenging the imposition of certain taxes at a hearing yesterday in Washtenaw Circuit Court. Jackson County Circuit Court Judge John C. Dalton gave attorneys for both sides until Nov. 8 to submit legal briefs on several motions, including the one to dismiss, brought by City Attorney Peter W. Forsythe. The suit was brought by Arthur E. Carpenter, an attorney who states that he represents a class of city taxpayers. He challenges taxes imposed and collected by the city for "special purpose," that part of the "pension and social security" tax used for social security payments of employés, and that part of the garbage collection tax which is used for rubbish disposal. Carpenter charges that these taxes are "illegal exactions" because he states that they exceed the city's 7.5-mill charter limitation and are not authorized by a vote of the City Council. He asks that the city be enjoined from collecting the disputed taxes. He also alleges that City Administrator Guy C. Larcom Jr. and Controller Lauren Jedele committed fraud in levying these taxes. The main motion argued was that for a summary judgment in favor of hte city, with the city's motion to strike part of the allegations of fraud against the two officials also argued. Forsythe cited three reasons in support of his dismissal motion. The first was that the court rules forbid more than one request for an injunction "with the same purpose and seeking the same relief." He contended that Carpenter's suit is the same as one he brought on behalf of seven other persons and which was dismissed by Washtenaw Circuit Judge William F. Ager Jr., who said that the parties were not proper persons to sue in that instance. The city attorney also contended that the court "lacks jurisdiction" over the present case because the law establishes an "exclusive remedy," that of paying taxes under protest prior to challenging them. Carpenter states that he has not paid his 1968 taxes. The plaintiff "could have pursued his remedy without depriving people of the services they have come to expect," Forsythe said. Requiring him to pay under protest would not cause Carpenter "irreparable harm" because his money would be refunded if his contentions that the taxes are illegal were upheld, Forsythe said. The city attorney said that the only new aspect of the case is Carpenter's "attempt to allege that some part of the proceeding was fraudulent." Forsythe said that the figures in the city budget do not exceed the city's 7.5-miH charter limitation for general property tax, that the garbage tax levied is within the two-miU limitation for that purpose, and that the pension and social security tax does not exceed the 2.5-mill limitation for that. Carpenter was trying to construe certain administrative procedures a s constituting fraud, Forsythe said. He is trying to say that the administrators must know how to construe a law before a court decides it, the city attorney said. Carpenter countered that the court rule was designed to prevent "shopping around" for a judge and said this is not the case here. Forsythe later noted that Carpenter knew that by making himself a party to the suit, he would automatically bring it before a visiting judge. Local judges do not normally hear cases involving local attomeys as plaintiffs and defendants. Carpenter said the city's procedure has been "so sloppy that it never got council action to levy amounts up to 30 per cent of the total taxes collected." The injunction he seeks would halt collection of only 15 per cent, or that which exceeds the charter limitation. He maintains that the special purpose tax is levied according to a law which was repealed in 1965; that social security taxes for employés must be within the 7.5-mill limitation, and that ■he garbage tax cannot be used for rubbish collection. The attorney contends that the couíts have jurisdiction as) given to them in the 1963 Michigan Constitution and said the "state courts must have decided 300 taxpayer suits." He said Larcom and Jedele knew of the claimed illegalities, t h a t their duties included recommending to council which taxes are legal, and that "to opérate without assurance of the legality of the taxes is fraud." Carpenter said the city presents "pie charts of its revenue sources and expenditures but nowhere does it say that the special purpose 1 a w was repealed, that an official was informed that the tax was illegal. The taxpayer has a right to assume that taxes are based on the law," he said. He maintained that he is enti-j tled to a determination by thej Circuit Court of the legality of the contested taxes. Forsythe countered that the! city's millage limits have not been exceeded and that j ter's allegations of fraud are based on his conclusions that i the taxes are illegal. "This is a dispute over what a legal provisión means. It is inconceivable that officials are charged with fraud for interpreting it before a court determination," he said. Judge Dalton indicated no timetable for reaching a decisión on the motions or coming to trial if he rules against the city's motion for dismissal.