U Subsidizing Expansion Of Dial-bus To Campus 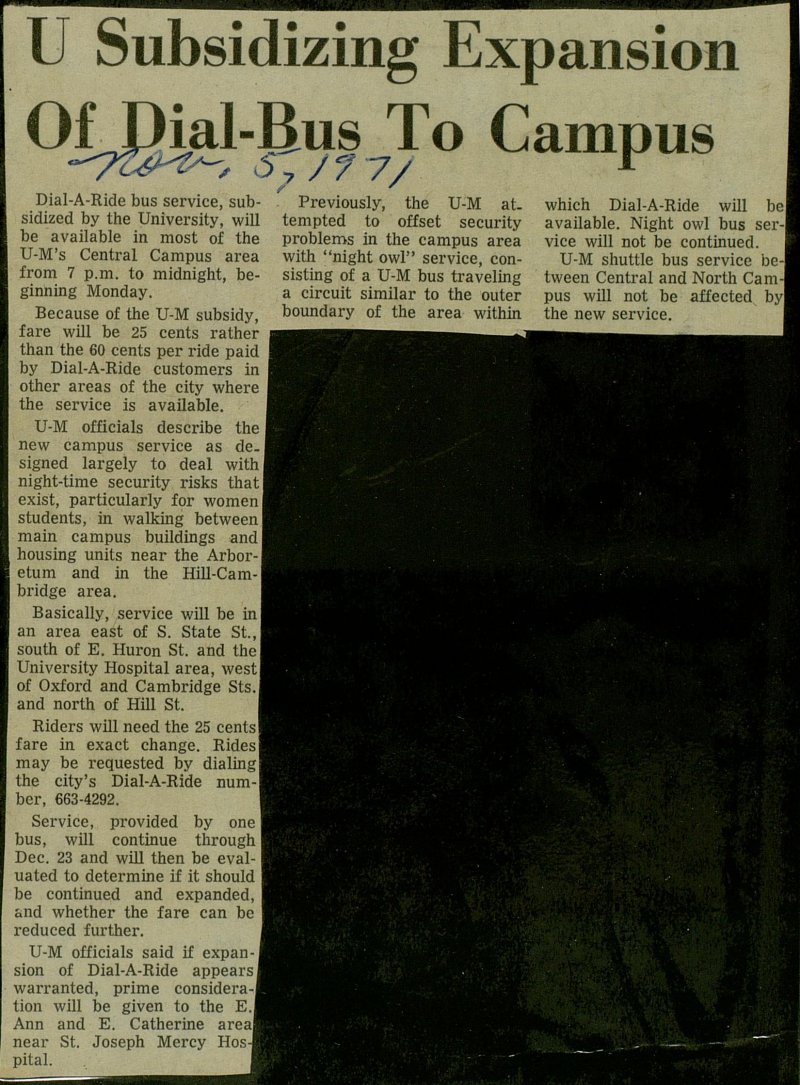 Dial-A-Ride bus service, subsidized by the University, will be available in most of the U-M's Central Campus area from 7 p.m. to midnight, beginning Monday. Because of the U-M subsidy, fare will be 25 cents rather than the 60 cents per ride paid by Dial-A-Ride customers in other areas of the city where the service is available. U-M officials describe the I new campus service as designed largely to deal with night-time security risks that exist, particularly for women students, in walking between main campus buildings and! housing units near the Arboretum and in the Hill-Cam-bridge area. Basically, service will be inl an area east of S. State St., south of E. Huron St. and the! University Hospital area, west of Oxford and Cambridge Sts. and north of Hill St. Riders will need the 25 cents I fare in exact change. Rides may be requested by dialingl the city's Dial-A-Ride num-I ber, 663-4292. I Service, provided by one I bus, will continue through I Dec. 23 and will then be 1 uated to determine if it should I be continued and expanded, I &nd whether the fare can be I reduced further. 1 U-M officials said if expan-l sion of Dial-A-Ride appearsB warranted, prime considera-B tion will be given to the E. I Ann and E. Catherine areaBj near St. Joseph Mercy Hos-B pital. Previously, the U-M attempted to offset security problems in the campus area with "night owl" service, consisting of a U-M bus traveling a circuit similar to the outer boundary of the area within which Dial-A-Ride will bel available. Night owl bus ser-j vice will not be continued. U-M shuttle bus service be-l tween Central and North Cam-I pus will not be affected byl the new service. 1