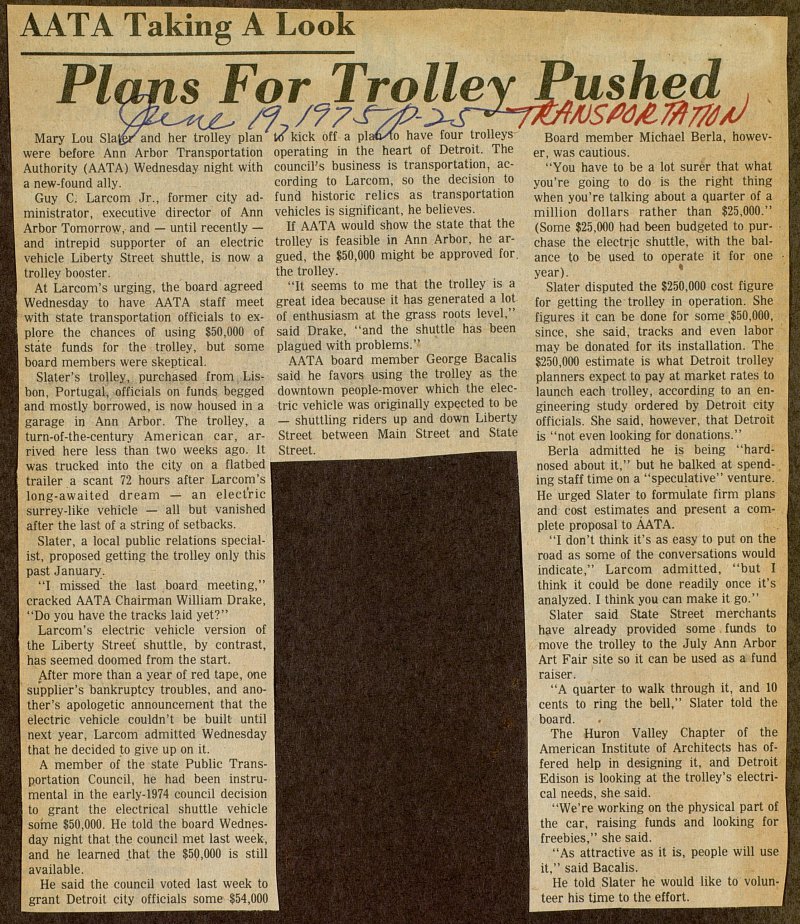 Mary Lou Slater and her trolley plan were before Ann Arbor Transportation Authority (AATA) Wednesday night with a new-found ally. Guy C. Larcom Jr., former city administrator, executive director of Ann Arbor Tomorrow, and - until recently - and intrepid supporter of an electric vehicle Liberty Street shuttle, is now a trolley booster. At Larcom's urging, the board agreed Wednesday to have AATA staff meet with state transportation officials to explore the chances of using $50,000 of state funds for the trolley, but some board members were skeptical. Slater's trolley, purchased from Lisbon, Portugal, officials on funds begged and mostly borrowed, is now housed in a garage in Ann Arbor. The trolley, a turn-of-the-century American car, arrived here less than two weeks ago. lt was trucked into the city on a flatbed trailer a scant 72 hours after Larcom's long-awaited dream - an electric surrey-like vehicle - all but vanished after the last of a string of setbacks. Slater, a local public relations specialist, proposed getting the trolley only this past January. "I missed the last board meeting," cracked AATA Chairman William Drake, "Do you have the tracks laid yet?" Larcom's electric vehicle version of the Liberty Street shuttle, by contrast, has seemed doomed from the start. After more than a year of red tape, one supplier's bankruptcy troubles, and anoI ther's apologetic announcement that the I electric vehicle couldn't be built until I next year, Larcom admitted Wednesday that he decided to give up on it. A member of the state Public Transportation Council, he had been instrumental in the early-1974 council decisión to grant the electrical shuttle vehicle some $50,000. He told the board Wednesday night that the council met last week, and he learned that the $50,000 is still available. He said the council voted last week to grant Detroit city officials some $54,000 fcf kick off a plafifo have four trolleys operating in the heart of Detroit. The council's business is transportation, according to Larcom, so the decisión to fund historie relies as transportation vehicles is significant, he believes. If AATA would show the state that the trolley is feasible in Ann Arbor, he argued, the $50,000 might be approved for. the trolley. "It seems to me that the trolley is a great idea because it has generated a lot of enthusiasm at the grass roots level," said Drake, "and the shuttle has been plagued with problems." AATA board member George Bacalis said he favors using the trolley as the downtown people-mover which the electric vehicle was originally expected to be - shuttling riders up and down Liberty Street between Main Street and State Street. Board member Michael Berla, however, was cautious. "You have to be a lot surer that what you're going to do is the right thing when you're talking about a quarter of a million dollars rather than $25,000." (Some $25,000 had been budgeted to chase the electric shuttle, with the balance to be used to opérate it for one year). Slater disputed the $250,000 cost figure for getting the trolley in operation. She figures it can be done for some $50,000, since, she said, tracks and even labor may be donated for its installation. The $250,000 estímate is what Detroit trolley planners expect to pay at market rates to launch each trolley, according to an engineering study ordered by Detroit city officials. She said, however, that Detroit is "not even looking for donations." Berla admitted he is being "hardnosed about it," but he balked at spending staff time on a "speculative" venture. He urged Slater to formúlate firm plans and cost estimates and present a píete proposal to ÁATA. "I don't think it's as easy to put on the road as some of the conversations would indícate," Larcom admitted, "but I think it could be done readily once it's analyzed. I think you can make it go." Slater said State Street merchants have already provided some . funds to move the trolley to the July Ann Arbor Art Fair site so it can be used as a fund raiser. "A quarter to walk through it, and 10 cents to ring the bell," Slater told the board. The Huron Valley Chapter of the American Institute of Architects has I fered help in designing it, and Detroit Edison is looking at the trolley's I cal needs, she said. "We're working on the physical part of the car, raising funds and looking for freebies," she said. "As attractive as it is, people will use it," said Bacalis. He told Slater he would like to 1 teer his time to the effort.