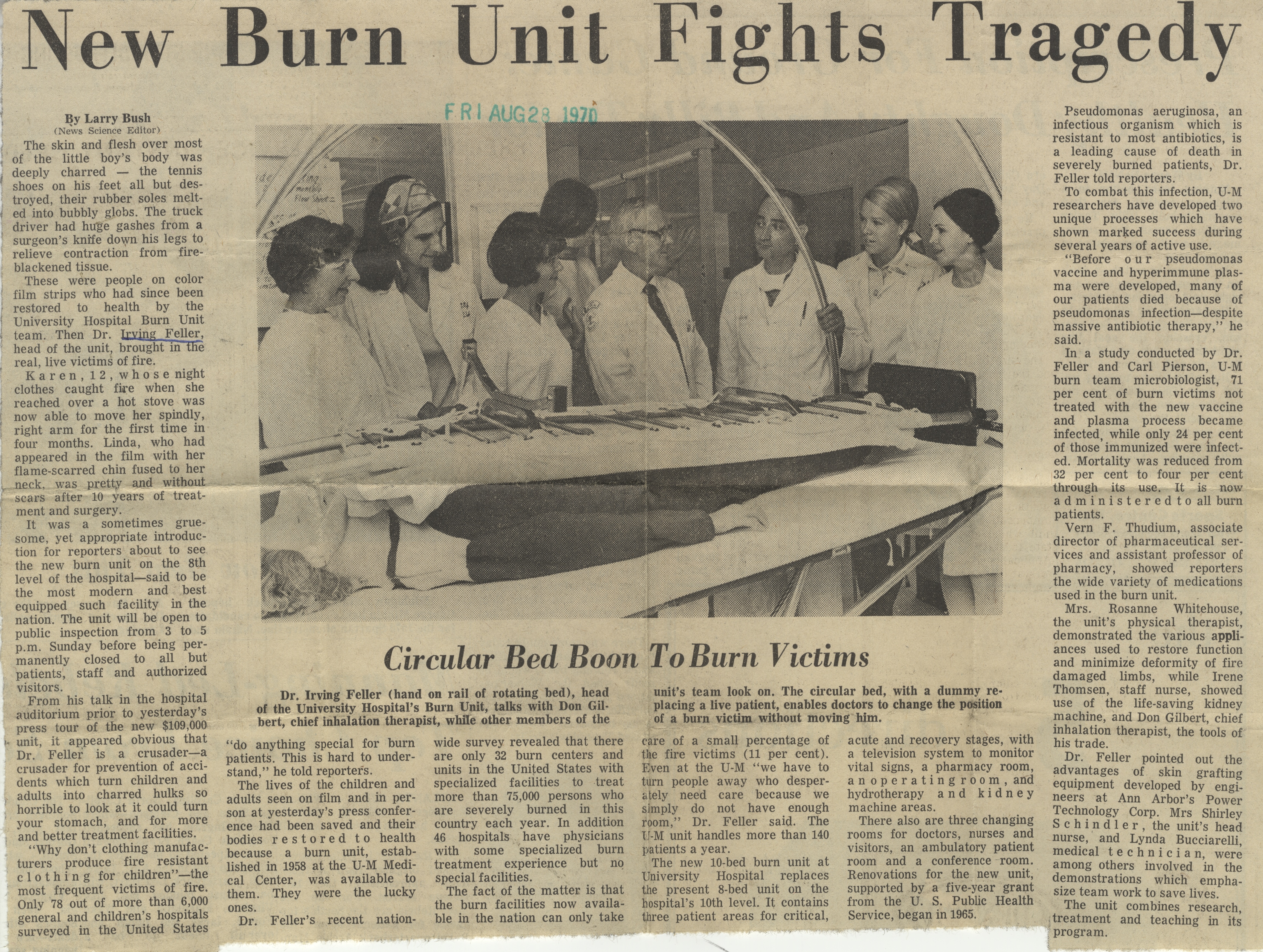 The skin and flesh over most of the little boy's body was deeply charred - the tennis shoes on his' f eet all but destroyed, their rubber soles melted into bubbly globs. The truck driver had huge gashes from a surgeon's knife down his legs to relieve contraction from fireblackened tissue. These were people on color film strips who had since been restored to health by the University Hospital Burn Unit team. Then Dr. Irving Feller, head of the unit, brought in the real, live victims of fire. Karen, 12, whose night clothes caught fire when she reached over a hot stove was now able to move her spindly, right arm for the first time in four months. Linda, who had i appeared in the film with her flame-scarred chin fused to her neck, was pretty and without scars after 10 years of treatment and surgery. It w.as a sometimes gruesome, yet appropriate introduction for reporters about to see the new burn unit on the 8th level of the hospital- said to be the most modern and best equipped such facility in the nation. The unit will be open to public inspection from 3 to 5 p.m. Sunday bef ore being permanently closed to all but patients, staf f and authorized visitors. From his talk in the hospital auditorium prior to yesterday's press tour of the new $109,000 unit, it appeared obvious that Dr. Feller is a crusader- a crusader for prevention of accidents which turn children and adults into charred hulks so horrible to look at it could turn your stomach, and for more and better treatment facilities. "Why don't clothing manufacturers produce fire resistant clothing for children"- the most frequent victims of fire. Only 78 out of more than 6,000 general and children's hospitals "do anything special for burn patients. This is hard to understand," he told reporters. The lives of the children and adults seen on film and in person at yesterday's press conference had been saved and their bodies restored to health because a burn unit, established in 1958 at the U-M Medical Center, was available to them. They were the lucky ones. Dr. Feller's recent wide survey revealed that there are only 32 burn centers and units in the United States with specialized facilities to treat more than 75,000 persons who are severely burned in this country each year. In addition 46 hospitals have physicians with some specialized burn treatment experience but no special facilities. The fact of the matter is that the burn facilities now availal-tlo in thp nnfrinn pan nnlv tnlip care of a small percentage of the fire victims (11 per cent). Even at the U-M "we have to turn people away who desperately need care because we simply do not have enough room," Dr. Feller said. The U-M unit handles more than 140 patients a year. The new 10-bed burn unit at niversity Hospital replaces ihe present 8-bed unit on the hospital's lOth level. It contains three natient areas for critical. acute and recovery stages, with a televisión system to monitor vital signs, a pharmacy room, anoperatingroom, and hydrotherapy and kidney machine areas. There also are three changing rooms for doctors, nurses and visitors, an ambulatory patiënt room and a conference room. Renovations for the new unit, supported by a five-year grant from the U. S. Public Health Service, beean in 1965. Psëudomonas aeruginosa, an infectious organism which is resistant to most antibiotics, is a leading cause of death in severely burned patients, Dr. Feller told reporters. To combat this infection, U-M researchers have developed two unique processes which have shown marked success during several years of active use. "Before our psëudomonas vaccine and hyperimmune plasma were developed, many of our patients died because of psëudomonas infection- despite massive antibiotic therapy," he said. In a study conducted by Dr. Feller and Cari Pierson, U-M burn team microbiologist, 71' per cent of burn victims not treated with the new vaccine and plasma process became infected, while only 24 per cent of thoseimmunized were infected. Mortality was reduced from 32 per cent to four per cent through its use. It is now administeredtoall burn patients. Vern F. Thudium, associate director of pharmaceutical services and assistant professor of pharmacy, showed reporters ' the wide variety of medications used in the burn unit. Mrs. Rosanne Whitehouse, the unit's physical therapist, demonstrated the various appliances used to restore function and minimize deformity of fire damaged limbs, while Irene Thomsen, staff nurse, showed use of the life-saving kidney machine, and Don Gilbert, chief inhalation therapist, the tools of his trade. Dr. Feller pointed out the advantages of skin grafting equipment developed by engineers at Ann Arbor's Power Technology Corp. Mrs Shirley S c h i n d 1 e r , the unit's head nurse, and Lynda Bucciarelli, medical technician, were among others involved in the demonstrations which emphasize team work to save lives. The unit combines research, treatment and teaching in its i program.