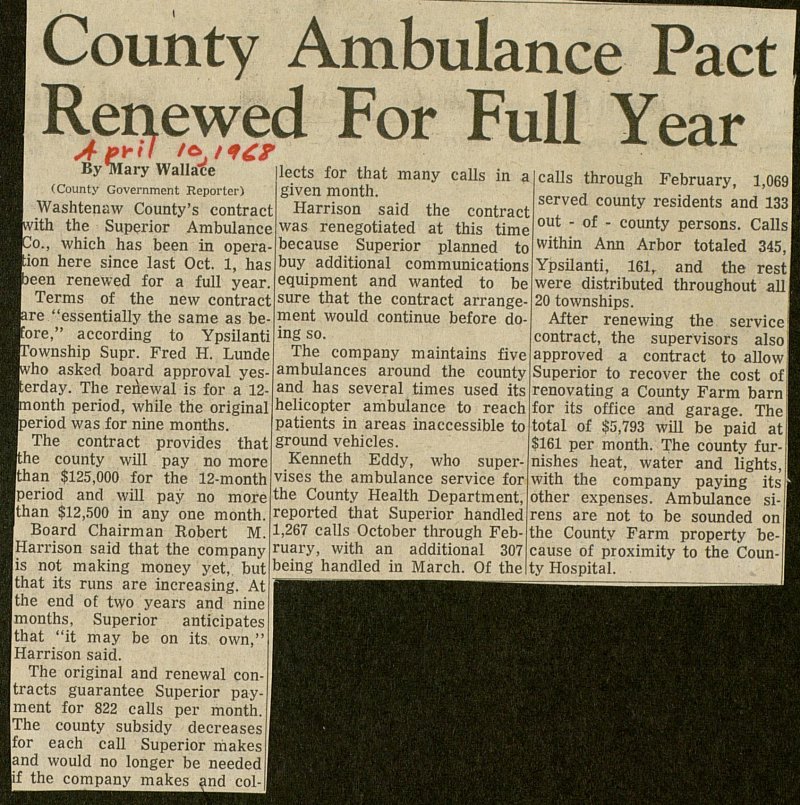 I Washtenaw County's contract kvith the Superior Ambulance Co., which has been in operalion here since last Oct. 1, has been renewed for a full year. I Terms of the new contract are "essentially the same as beEore," according to Ypsilanti Township Supr. Pred H. Lunde who asked board approval yesterday. The renewal is for a 12month period, while the original period was for nine months. I The contract provides that pie county will pay no more Ithan $125,000 for the 12-month period and will pay no more than $12,500 in any one month. Board Chairman Robert M. Harrison said that the company is not making money yet,. but that its runs are increasing. At the end of tyo years and nine months, Superior anticipates that "it may be on its own," Harrison said. The original and renewal contracts guarantee Superior payment for 822 calis per month. The county subsidy decreases for each cali Superior niakes land would no longer be needed af the company makes and col1 lects for that many calis in a given month. Harrison said the contrac was renegotiated at this time because Superior planned to buy additional Communications equipment and wanted to be sure that the contract arrangement would continue before doing so. The company maintains five ambulances around the county and has several times used its helicopter ambulance to reach patients in areas inaccessible to ground vehicles. Kenneth Eddy, who supervises the ambulance service for he County Health Department, reported that Superior handled 1,267 calis October through February, with an additional 307 being handled in March. Of the ■ - = - - ■■■- calis through February, 1,069 served county residents and 133 out - of - county persons. Calis Within Ann Arbor totaled 345, Ypsilanti, 161,. and the rest were distributed throughout all 20 townships. After renewing the service contract, the supervisors also approved a contract to allow Superior to recover the cost of renovating a County Farm barn 'or its office and garage. The ;otal of $5,793 will be paid atl il61 per month. The county furnishes heat, water and lights, with the company paying its other expenses. Ambulance si-J rens are not to be sounded on I ;he County Farm property beause of proximity to the Coun;y Hospital. i