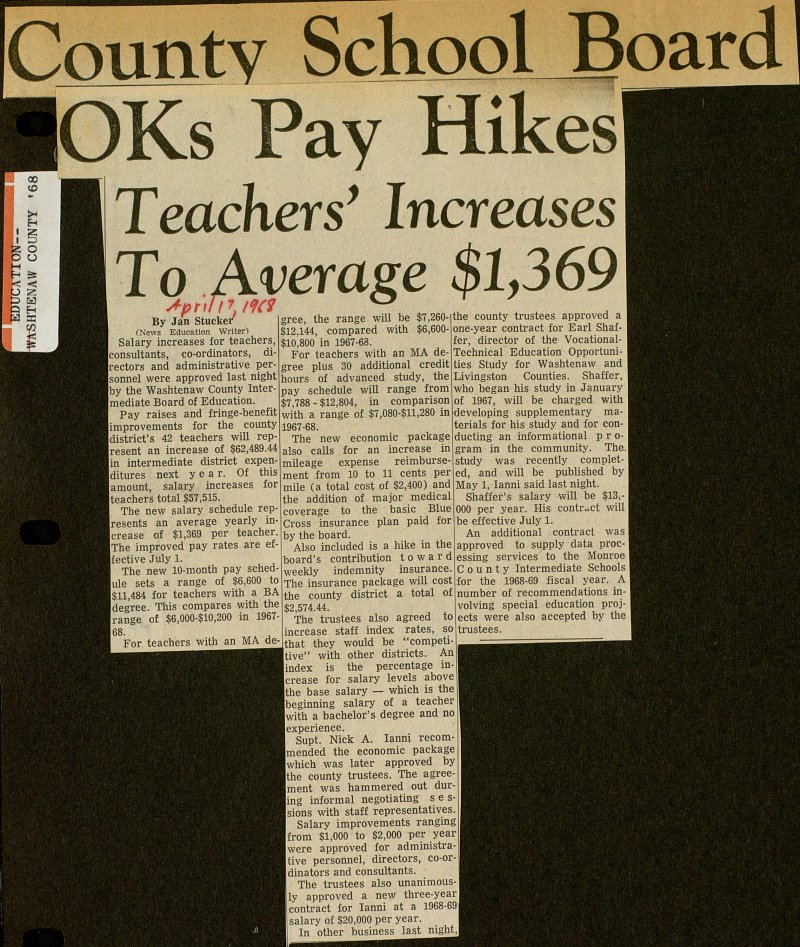 Salary increases for teachers, consultants, co-ordinators, directors and administrative personnel were approved last night by the Washtenaw County Intermedíate Board of Education. Pay raises and fringe-benefit improvements for the county district's 42 teachers will represent an increase of $62,489.44 in intermedíate district expenditures next y e a r. Of this amount, salary increases for teachers total $57,515. The new salary schedule represents an average yearly increase of $1,369 per teacher. The improved pay rates are efIfective July 1. The new 10-month pay schedule sets a range of $6,600 to $11,484 for teachers with a BA degree. This compares with the range of $6,000-$10,200 in 196768. For teachers with an MA gree, the range will be $7,260$12,144, compared with $6,600$10,800 in 1967-68. For teachers with an MA degree plus 30 additional credit tiours of advanced study, the pay schedule will range from $7,788 - $12,804, in comparison with a range of $7,080-$11,280 in 1967-68. The new economie package also calis for an increase in mileage expense reimbursement from 10 to 11 cents per mile (a total cost of $2,400) and the addition of major medical coverage to the basic Blue Cross insurance plan paid for by the board. Also included is a hike in the board' s contribution t o w a r d weekly indemnity insurance. The insurance package will cost the county district a total of $2.574.44. The trustees also agreea to increase staff index rates, so that they would be "competitive" with other districts. An index is the percentage increase for salary levéis above the base salary - which is the ibeginning salary of a teacher with a bachelor's degree and no experience. Supt. Nick A. Ianni recommended the economie package which was later approved by the county trustees. The agreement was hammered out during informal negotiating s e ssions with staff representatives. Salary improvements ranging from $1,000 to $2,000 per year were approved for administrative personnel, directors, co-ordinators and consultants. I The trustees also unanimous[ly approved a new three-year contract for Ianni at a 1968-69 salary of $20,000 per year. In other business last night, tie county trustees approved a I one-year contract for Earl I 'er, director of the I Technical Education I ies Study for Washtenaw and I livingston Counties. Shaffer, I who began his study in January of 1967, will be charged with developing supplementary materials for his study and for conducting an informational program in the community. The. study was recently completed, and will be published by May 1, Ianni said last night. Shaffer's salary will be $13,000 per year. His contract will be effective July 1. An additional contract was approved to supply data processing services to the Monroe County Intermedíate Schools for the 1968-69 fiscal year. A number of recommendations involving special education projects were also accepted by the trustees.