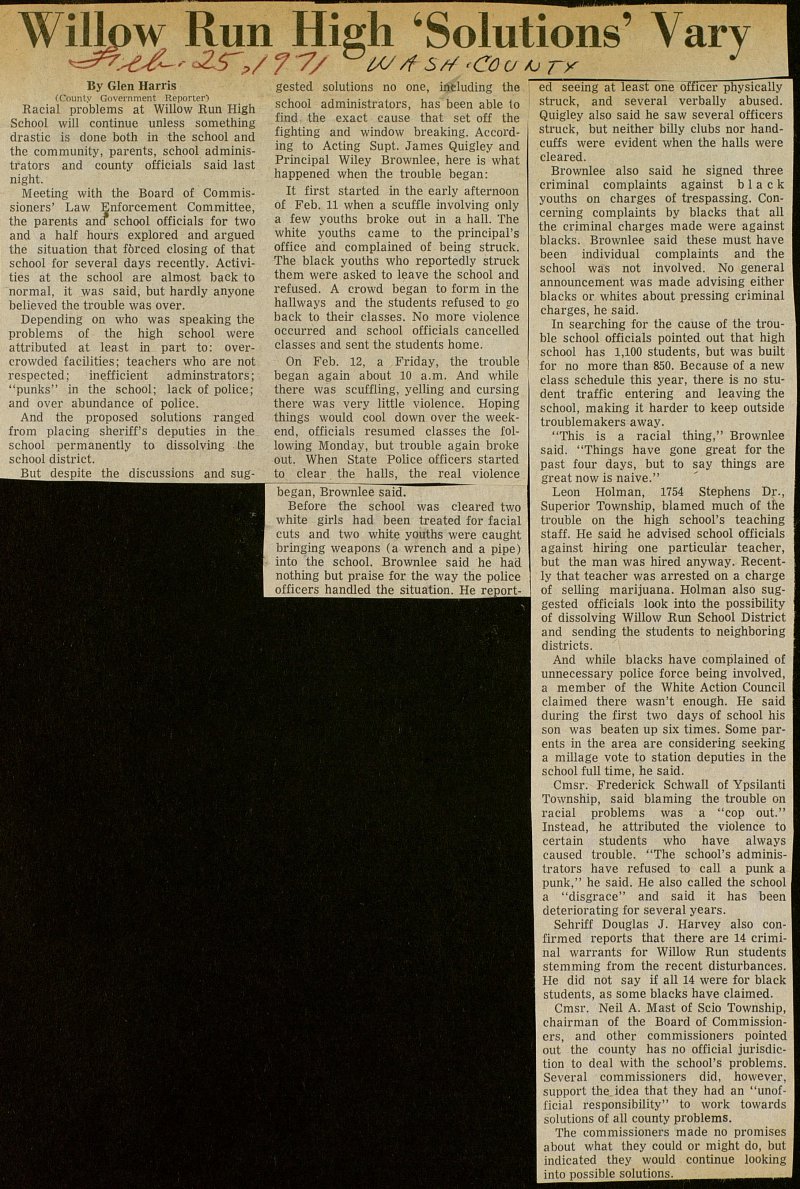 Racial problems at Willow Run High School will continue unless something drastic is done both in the school and the community, parents, school administrators and eounty officials said last night. Meeting with the Board of Commissioners' Law Enforcement Committee, the parents ana school officials for two and a half hours explored and argued the situation that förced closing of that school for several days recently. Activities at the school are almost back to normal, it was said, but hardly anyone believed the trouble was over. Depending on who was speaking the problems of the high school w'ere attributed at least in part to: overcrowded facilities; teachers who are not respected; inefficiënt adminstrators; "punks" in the school; lack of pólice; and over abundance of pólice. And the proposed solutions ranged from placing sheriff's deputies in the school permanently to dissolving the school district. But despite the discussions and gested solutions no one, ifteluding the school administrators, has been able to find the exact cause that set off the fighting and window breaking. According to Acting Supt. James Quigley and Principal Wiley Brownlee, here is what happened when the trouble began: It first started in the early afternoon of Feb. 11 when a scuffle involving only a few youths broke out in a hall. The white youths came to the principal's office and complained of being struck. The black youths who reportedly struck them were asked to leave the school and refused. A crowd began to form in the hallways and the students refused to go back to their classes. No more violence occurred and school officials cancelled classes and sent the students home. On Feb. 12, a Friday, the trouble began again about 10 a.m. And while there was scuffling, yelling and cursing there was very little violence. Hoping things would cool down over the weekend, officials resumed classes the following Monday, but trouble again broke out. When State Pólice officers started to clear the halls, the real violence began, Brownlee said. Before the school was cleared two white girls had been treated for facial cuts and two white youths were caught bringing weapons (a wrench and a pipe) into the school. Brownlee said he had nothing but praise for the way the pólice officers handled the situation. He ed seeing at least one officer physically struck, and several verbally abused. Quigley also said he saw several officers struck, but neither billy clubs nor handcuffs were evident when the halls were cleared. Brownlee also said he signed three criminal complaints against black youths on charges of trespassing. Concerning complaints by blacks that all the criminal charges made were against blacks. Brownlee said these must have been individual complaints and the school was not involved. No general announcement was made advising either blacks or whites about pressing criminal charges, he said. In searching for the cause of the trouble school officials pointed out that high school has 1,100 students, but was built for no more than 850. Because of a new class schedule this year, there is no student traffic entering and leaving the school, making it harder to keep outside troublemakers away. "This is a racial thing," Brownlee said. "Things have gone great for the past four days, but to say things are great now is naive." Leon Holman, 1754 Stephens Dr., Superior Township, blamed much of the trouble on the high school's teaching staff. He said he advised school officials against hirihg one particular teacher, but the man was hired anyway. Recently that teacher was arrested on a charge of selling marijuana. Holman also suggested officials look into the possibility of dissolving Willow Run School District and sending the students to neighboring districts. And while blacks have complained of unnecessary pólice forcé being involved, a member of the White Action Council claimed there wasn't enough. He said during the first two days of school his son was beaten up six times. Some parents in the area are considering seeking a millage vote to station deputies in the school full time, he said. Cmsr. Frederick Schwall of Ypsilanti Township, said blaming the trouble on racial problems was a "cop out." Instead, he attributed the violence to certain students who have always caused trouble. "The school's administrators have refused to cali a punk a punk," he said. He also called the school i a "disgrace" and said it has been deteriorating for several years. Sehriff Douglas J. Harvey also confirmed reports that there are 14 criminal warrants for Willow Run students stemming from the recent disturbances. He did not say if all 14 were for black students, as some blacks have claimed. Cmsr. Neil A. Mast of Scio Township, chairman of the Board of Commissioners, and other commissioners pointed out the county has no official jurisdiction to deal with the school's problems. Several commissioners did, however, I support the. idea that they had an "unofficial responsibility" to work towards solutions of all county problems. The commissioners made no promises about what they could or might do, but indicated they would continue looking into possible solutions.