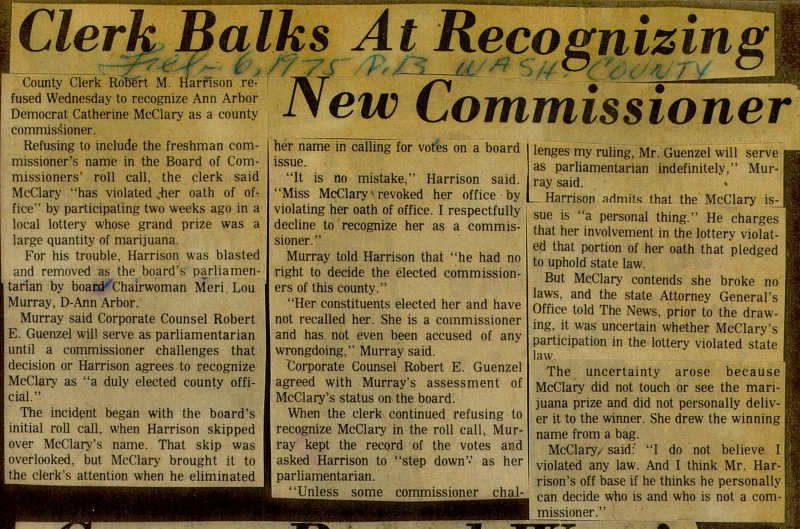 County Clerk RoMh M. Harnson refused Wednesday to recognize Ann Arbor Democrat Catherine McClary as a county commissioner. Refusing to include the freshman commissioner's name in the Board of Commissioners' roll cali, the clerk said McClary "has violated "her oath of office" by participating two weeks ago in a local lottery whose grand prize was a large quantity of marijuana. For his trouble, Harrison was blasted and removed as the board's parliamentarian by board chairwoman Meri Lou Murray, D-Ann Arbor. Murray said Corporate Counsel Robert E. Guenzel will serve as parliamentarian until a commissioner challenges that decision or Harrison agrees to recognize McClary as "a duly elected county official." The incident began with the board's initial roll call, when Harrison skipped over McClary's name. That skip was overlooked, but McClary brought it to the clerk's attention when he eliminated ner name in calling for votes on a board issue. "It is no mistake," Harrison said. "Miss McClary revoked her office by violating her oath of office. I respectfully decline to recognize her as a commissioner." Murray told Harrison that "he had no right to decide the elected commissioners of this county." "Her constituents elected her and have not recalled her. She is a commissioner and has not even been accused of any wrongdoing," Murray said. Corporate Counsel Robert E. Guenzel agreed with Murray's assessment of McClary's status on the board. When the clerk continued refusing to recognize McClary in the roll cali, MurI ray kept the record of the votes and asked Harrison to "step down" as her parliamentarian. "Unless some commissioner lenges my ruling, Mr. Guenzel will serve i as parliamentarian indefinitely," Murray said. _Harrison arimits that the McClary isj sue is "a personal thing." He charges that her involvement in the lottery violated that portion of her oath that pledged to uphold state law. But McClary contends she broke no laws, and the state Attorney General's Office told The News, prior to the I ing, it was uncertain whether McClary's participation in the lottery violated state law. The uncertainty arose because McClary did not touch or see the marijuana prize and did not personally deliver it to the winner. She drew the winning name from a bag. McClary said: "I do not believe I violated any law. And I think Mr. Harrison's off base if he thinks he personally can decide who is and who is not a commissioner."