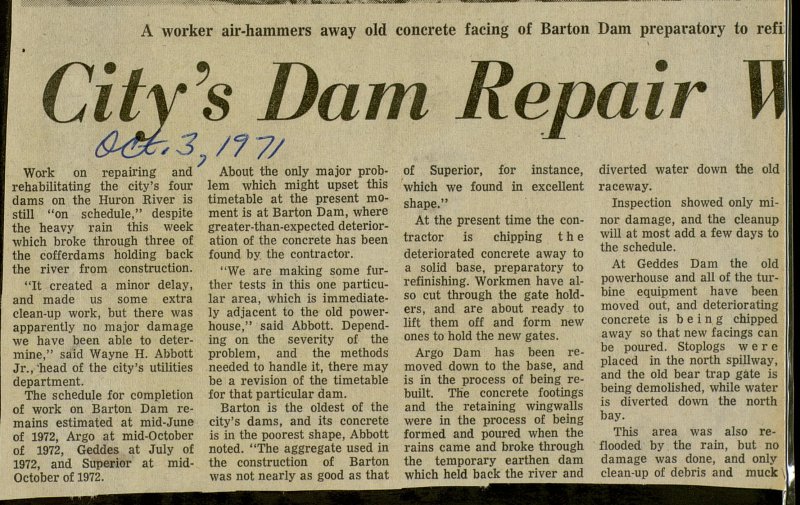 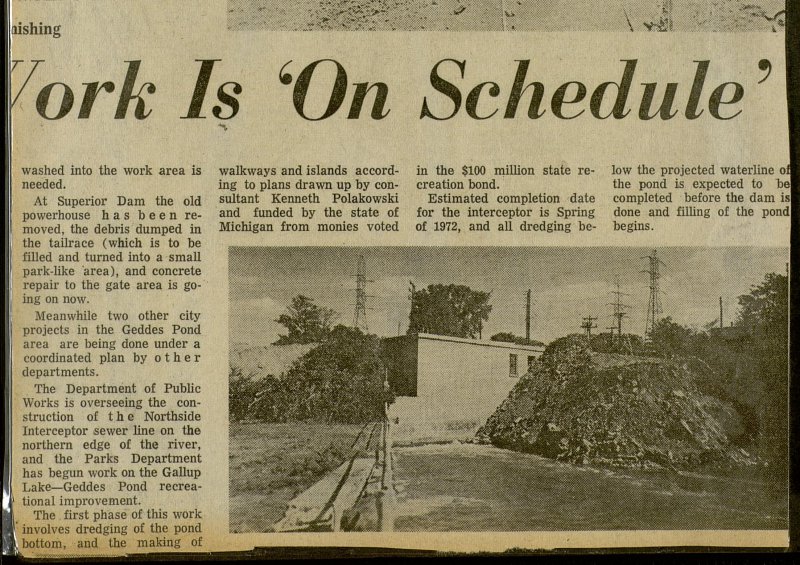 Work on repairing and rehabilitating the city's four dams on the Huron River is still "on schedule," despite the heavy rain this week which broke through three of the cofferdams holding back the river from construction. "It created a minor delay, and made us some extra clean-up work, but there was apparently no major damage we have been able to determine," said Wayne H. Abbott Jr.,'head of the city's utilities department. The schedule for completion of work on Barton Dam remains estimated at mid-June of 1972, Argo at mid-October of 1972, Geddes at July of 1972, and Superior at midOctober of 1972. mmnmm About the only major problem which might upset this timetable at the present moment is at Barton Dam, where greater-than-expected deterioration of the concrete has been found by the contractor. "We are making some further tests in this one particular área, which is immediately adjacent to the old powerhouse," said Abbott. Depending on the severity of the problem, and the methods needed to handle it, there may be a revisión of the timetable for that particular dam. Barton is the oldest of the city's dams, and its concrete is in the poorest shape, Abbott noted. "The aggregate used in the construction of Barton was not nearly as good as that of Superior, for instance, which we found in excellent shape." At the present time the contractor is chipping the deteriorated concrete away to a solid base, preparatory to refinishing. Workmen have also cut through the gate holders, and are about ready to lift them off and form new ones to hold the new gates. Argo Dam has been removed down to the base, and is ïn the process of being rebuilt. The concrete footings and the retaining wingwalls were in the process of being formed and poured when the rains came and broke through the temporary earthen dam which held back the river and diverted water down the old raceway. Inspection showed only minor damage, and the cleanup will at most add a few days to the schedule. At Geddes Dam the old powerhouse and all of the turbine equipment have been moved out, and deteriorating concrete is b e i n g chipped away so that new facings can be poured. Stoplogs w e r e placed in the north spillway, and the old bear trap gáte is being demolished, while water is diverted down the north bay. This area was also reflooded by the rain, but no damage was done, and only clean-up of debris and muck washed into the work area is needed. At Superior Dam the old powerhouse has been removed, the debris dumped in the tailrace (which is to be filled and turned into a small park-like area), and concrete repair to the gate area is going on now. Meanwhile two other city projects in the Geddes Pond area are being done under a coordinated plan by other departments. The Department of Public Works is overseeing the construction of the Northside Interceptor sewer line on the northern edge of the river, and the Parks Department has begun work on the Gallup Lake- Geddes Pond recreational improvement. The first phase of this work involves dredging of the pond bottom, and the making of walkways and islands according to plans drawn up by consultant Kenneth Polakowski and funded by the state of Michigan from monies voted in the $100 million state recreation bond. Estimated completion date for the interceptor is Spring of 1972, and all dredging low the projected waterline on the pond is expected to "bel completed before the dam is done and filling of the pond begins.