Appointments Made For WCC Black Studies 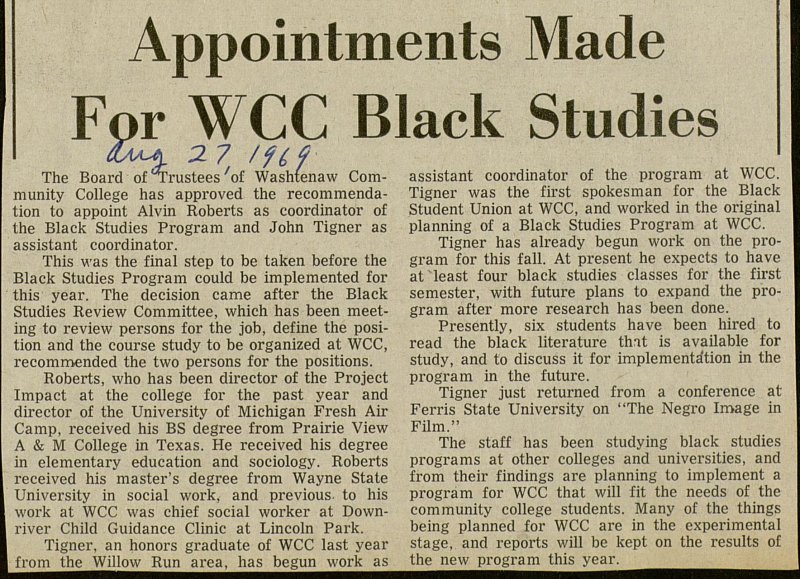 The Board of "Trustees of Washtenaw Community College has approved the reeommendation to appoint Alvin Roberts as coördinator of the Black Studies Program and John Tigner as assistant coördinator. This was the final step to be taken before the Black Studies Program could be implemented for this year. The decisión carne after the Black Studies Review Committee, which has been meeting to review persons for the job, define the position and the course study to be organized at WCC, recommended the two persons for the positions. Roberts, who has been director of the Project Impact at the college for the past year and director of the University of Michigan Fresh Air Camp, received his BS degree from Prairie View A & M College in Texas. He received his degree in elementary education and sociology. Roberts received his master's degree from Wayne State University in social work, and to his work at WCC was chief social worker at Downriver Child Guidance Clinic at Lincoln Park. Tigner, an honors gradúate of WCC last year from the Willow Run área, has begun work as assistant coördinator of the program at WCC. Tigner was the first spokesman for the Black Student Union at WCC, and worked in the original planning of a Black Studies Program at WCC. Tigner has already begun work on the program for this fall. At present he expects to have at least four black studies classes for the first semester, with future plans to expand the program after more research has been done. Presently, six students have been hired to read the black literature thnt is available for study, and to discuss it for implementátion in the program in the future. Tigner just returned from a conference at Ferris State University on "The Negro Image in Film." The staff has been studying black studies programs at other colleges and universities, and from their findings are planning to implement a program for WCC that will fit the needs of the community college students. Many of the things being planned for WCC are in the experimental stage, and reports will be kept on the results of the new program this year.