Women Get Help In Job Placement 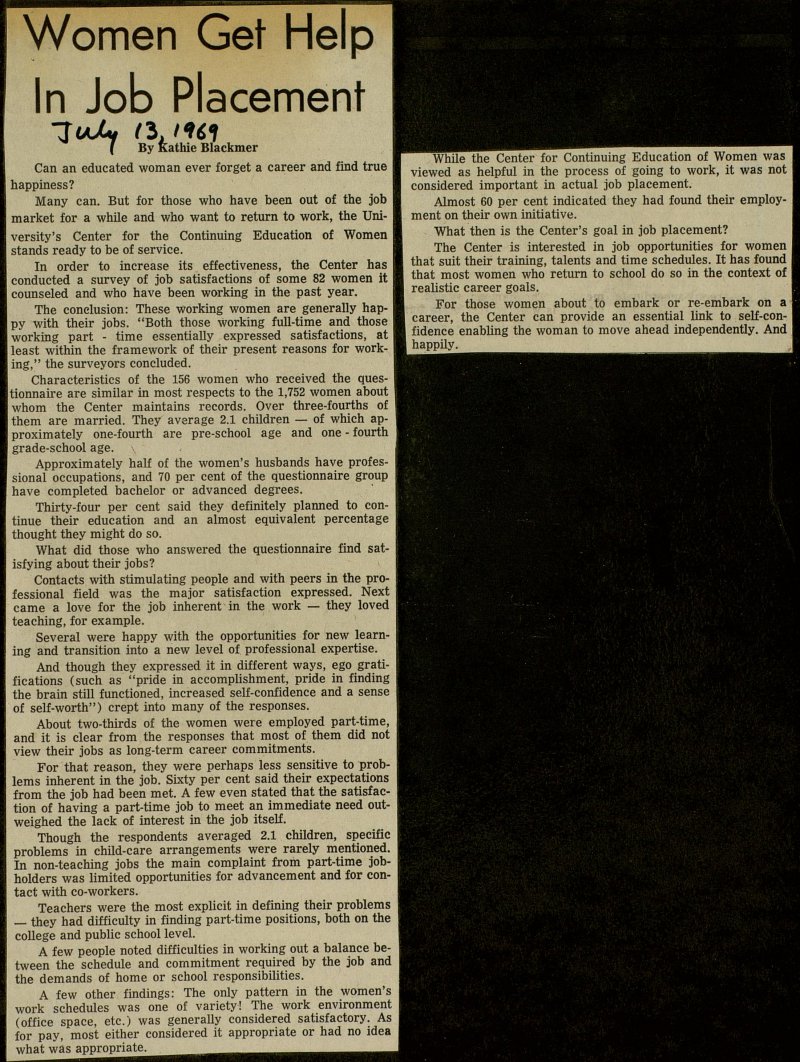 Can an educated woman ever forget a career and find true happiness? Many can. But for those who have been out of the job market for a while and who want to return to work, the University's Center for the Continuing Education of Women stands ready to be of service. In order to increase its effectiveness, the Center has conducted a survey of job satisfactions of some 82 women it counseled and who have been working in the past year. The conclusión: These working women are generally happy with their jobs. "Both those working full-time and those working part - time essentially expressed satisfactions, at least within the framework of their present reasons for working," the surveyors concluded. Characteristics of the 156 women who received the questionnaire are similar in most respects to the 1,752 women about whom the Center maintains records. Over three-fourths of them are married. They avarage 2.1 children - of which approximately one-fourth are pre-school age and one - fourth grade-school age. Approximately half of the women's husbands have professional occupations, and 70 per cent of the questionnaire group have completed bachelor or advanced degrees. Thirty-four per cent said they definitely planned to continue their education and an almost equivalent percentage thought they might do so. What did those who answered the questionnaire find satisfying about their jobs? Contacts with stimulating people and with peers in the professional field was the major satisfaction expressed. Next carne a love for the job inherent in the work - they loved teaching, for example. Several were happy with the opportunities for new learning and transition into a new level of professional expertise. And though they expressed it in different ways, ego gratifications (such as "pride in accomplishment, pride in finding the brain still functioned, increased self-confidence and a sense of self-worth") crept into many of the responses. About two-thirds of the women were employed part-time, and it is clear from the responses that most of them did not view their jobs as long-term career commitments. For that reason, they were perhaps less sensitive to problems inherent in the job. Sixty per cent said their expectations from the job had been met. A few even stated that the satisfaction of having a part-time job to meet an immediate need outweighed the lack of interest in the job itself. Though the respondents averaged 2.1 children, specific problems in child-care arrangements were rarely mentioned. In non-teaching jobs the main complaint from part-time jobholders was limited opportunities for advancement and for contact with co-workers. Teachers were the most explicit in defining their problems - they had difficulty in finding part-time positions, both on the college and public school level. A few people noted difficulties in working out a balance between the schedule and commitment required by the job and the demands of home or school responsibilities. A few other findings: The only pattern in the women's work schedules was one of variety! The work environment (office space, etc.) was generally considered satisfactory. As for pay, most either considered it appropriate or had no idea what was appropriate. _______ While the Center for Continuing Education of Women was viewed as helpful in the process of going to work, it was not considered important in actual job placement. Almost 60 per cent indicated they had found their employment on their own initiative. What then is the Center's goal in job placement? The Center is interested in job opportunities for women that suit their training, talents and time schedules. It has found that most women who return to school do so in the context of realistic career goals. For those women about to embark or re-embark on a career, the Center can provide an essential link to self-confidence enabling the woman to move ahead independently. And haDDilv.