They're Out To Raise 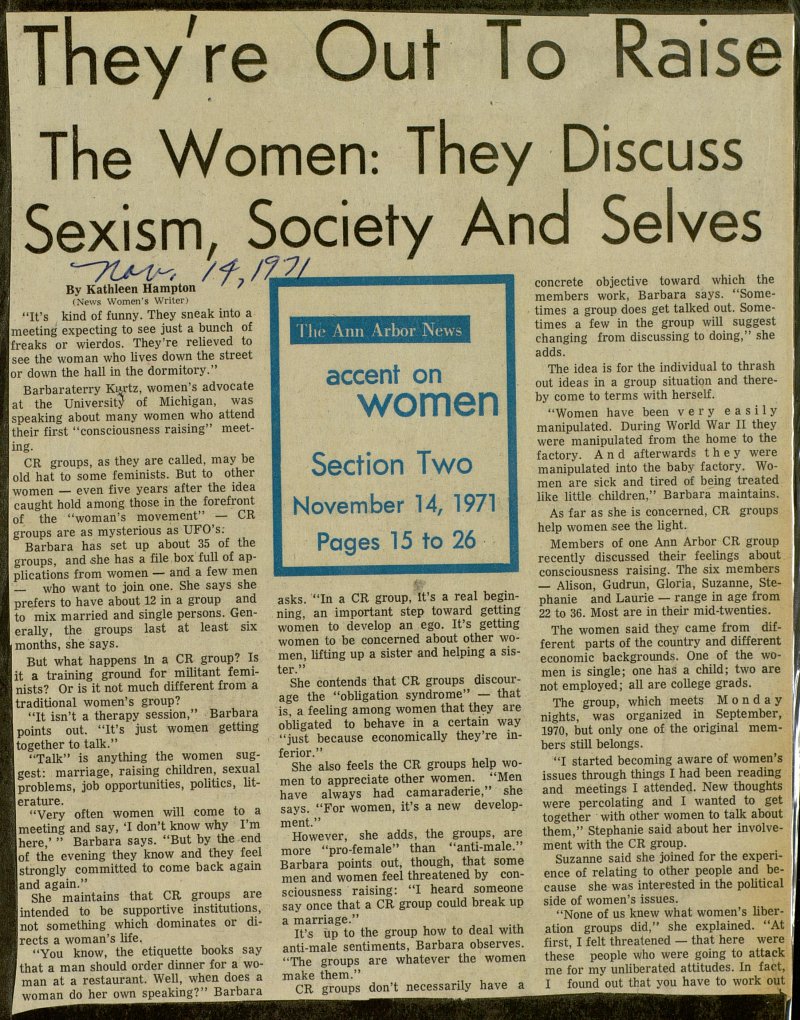 "It's kind of funny. They sneak into a meeting expecting to see just a bunch of freaks or wierdos. They're relieved to see the woman who lives down the street or down the hall in the dormitory." Barbaraterry Kwrtz, women's advocate at the University of Michigan, was speaking about many women who attend their first "consciousness raising" meeting. CR groups, as they are called, may be old hat to some feminists. But to other women - even five years after the idea caught hold among those in the forefront of the "woman's movement" - CR groups are as mysterious as UFO's: Barbara has set up about 35 of the groups, and she has a file box f uil of applications f rom women - and a few men - who want to join one. She says she prefers to have about 12 in a group and to mix married and single persons. Generally, the groups last at least six months, she says. But what happens In a CR group? Is lit a training ground for militant feminists? Or is it not much different from a I traditional women's group? "It isn't a therapy session," Barbara points out. "It's just women getting together to talk." "Talk" is anything the women suggest: marriage, raising children, sexual problems, job opportunities, politics, literature. "Very often women will come to a I meeting and say, 'I don't know why I'm here,' " Barbara says. "But by the end of the evening they know and they feel strongly committed to come back again land again." She maintains that CR groups are intended to be supportive institutions, not something which dominates or directs a woman's life. "You know, the etiquette books say that a man should order dinner for a woman at a restaurant. Well, when does a I woman do her own speaking?" Barbara asks. "In a CR group, It's a real beginning, an important step toward getting women to develop an ego. It's getting women to be concerned about other women, lifting up a sister and helping a sister." She contends that CR groups discourage the "obligation syndrome" - that is, a feeling among women that they are obligated to behave in a certain way "just because economically they're inferior." She also feels the CR groups help women to appreciate other women. "Men have always had camaraderie," she says. "For women, it's a new development." However, she adds, the groups, are more "pro-female" than "anti-male." Barbara points out, though, that some men and women feel threatened by consciousness raising: "I heard someone say once that a CR group could break up a marriage." It's üp to the group how to deal with anti-male sentiments, Barbara observes. "The groups are whatever the women make them." CR groups don't necessarily have a concrete objective toward which the members work, Barbara says. "Sometimes a group does get talked out. Sometimes a few in the group will suggest changing from discussing to doing," she adds. The idea is for the individual to thrash out ideas in a group situation and thereby come to terms with herself. "Women have been ver y easily manipulated. During World War II they were manipulated from the home to the factory. And afterwards they were manipulated into the baby factory. Women are sick and tired of being treated like little children," Barbara maintains. As far as she is concerned, CR groups help women see the light. Members of one Ann Arbor CR group recently discussed their feelings about consciousness raising. The six members - Alison, Gudrun, Gloria, Suzanne, Stephanie and Laurie - range in age from 22 to 36. Most are in their mid-twenties. The women said they carne from different parts of the country and different economie backgrounds. One of the women is single; one has a child; two are not employed; all are college grads. The group, which meets M o n d a y nights, was organized in September, 1970, but only one of the original members still belongs. "I started becoming aware of women's issues through things I had been reading and meetings I attended. New thoughts were percolating and I wanted to get together with other women to talk about them," Stephanie said about her involvement with the CR group. Suzanne said she joined for the experience of relating to other people and because she was interested in the political side of women's issues. "None of us knew what women's liberation groups did," she explained. "At first, I feit threatened - that here were ; these people who were going to attack me for my unliberated attitudes. In f act, I found out that you have to work out accent on women Section Two November 14, 1971 Pages 15 to 26